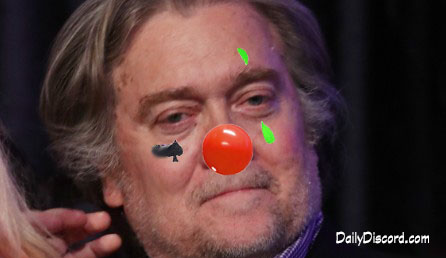 Trump Tower—A drunk Stephen Bannon reported for work today, having neglected to take off some of his costume from the previous night. Mr. Bannon’s unpredictable behavior as Trump’s new chief-strategist has sent shockwaves across the internet. Many are implicating Bannon as the force behind the creepy clown phenomenon. President-elect Ass-Clown Hitler told reporters, “Bannon is a creep and he is a clown, but that’s as far as it goes. He’s not, nor has he ever been, a creepy clown at the same time. Let’s get one thing straight, no one I am going to hire is going to be able to multitask. I get a lot of crap about not being inclusive. I like clowns. In fact, I plan to fill the White House with them. This is me being inclusive. There’s plenty of room in the GOP tent for clowns. Just as long as whatever is under all that face paint is white.”

Krusty the Clown told the Discord, “I don’t want to sound presumptuous, but, ahh, I would make a great head of the Department of Transportation. Think about all the gas we could save by stuffing dozens of people into little clown cars. I can still work on The Simpsons too. I can juggle two jobs, I’m a clown. We can juggle anything!”

President Obama weighed in on the matter, “All clowns are creepy and I have a message for them. I can still make an executive order to have all clowns rounded up and sent to Guantanamo, even Mr. Bannon. If I can’t close that prison, why not use it to segregate the clown menace from honest hard-working Americans? You have a choice, America, being creeps or being clowns. Don’t be both, or even the Red Cross won’t be able save you.”