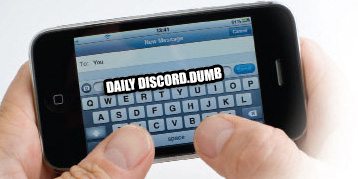 This page is dedicated to the non stop dumb ass texts that are exchanged regularly between Discord Staff. Each week we pick our favorite to share with our four fans.

Put The Fish Bladder Back Guinness Or I’m Cancelling Happy Hour At Murphy’s!

Las Vegas,  NV—It’s been awhile since I’ve paid homage to the Guinness Gods, but I wish I was returning to this topic under better circumstances. I bring terrible news. It’s not about the Mets; it’s much worse. Guinness is taking the trace amounts of fish bladder from their famous malt-roasted magic. I know, I know,…

END_OF_DOCUMENT_TOKEN_TO_BE_REPLACED

As the number of craft breweries in the U.S. climbs to 3,500, psychologists are taking note of a developing phenomenon. Studies suggest craft beer drinkers are having less sex. Mick Zano may hold to his man-boob phytoestrogen theory, here, but I think there’s something else lingering in the air. (Visited 460 times, 1 visits today)