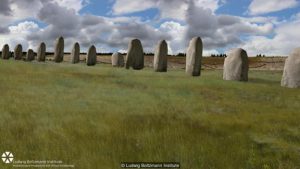 Dinglebury, ENG—Dr. Sterling Hogbein, of the Hogbein Institute and gift shop, is back in the news again today and pushing another controversial theory. In 2012 he proposed an alternative theory to explain the many megalithic structures dotting the English landscape. This important archeofictionologist now believes he has irrefutable evidence to support his earlier claim that they were, indeed, formed by erosion. Dr. Hogbein told the Discord today, “The mystery of Stonehenge is solved! And, sadly, it has nothing to do with the Loch Ness monster. All those years wasted. However, most of these ancient so-called ‘structures’ were actually formed through natural erosionary processes, such as wind and water. This makes particular sense after a few pints.”

When asked to explain his theory at Stonehenge to a professor of archeological studies at Oxford, Dr. Hogbein began blowing on one of the large stone dolman. “Notice how that doesn’t seem like a lot of force, but if I were to stand in this field for the next ten thousand years doing this, I would become quite bored.”

Dr. Hogbein also reports interviewing several druids from nearby Andover who claim to, “Have no idea how the thing got there.”

The Oxford University department of archeological studies has chosen not to officially comment on Dr. Hogbein’s theory, but the professor in question has insisted Hogbein pay for his coach back to Oxford.