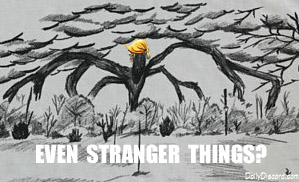 Oh brother, why blog thou? I don’t remember voting for Trump, so ‘Opposition, heal thyself.’ To summarize last year’s election, your side lied endlessly about my candidate and then elected a blithering sociopath to the highest office in the land. What part is still confusing you? Take some responsibility for the carnage ahead. While I was covering the intellectual demise of the right, what were you going on about? Benghazi? Hobby Lobby? Radical Muslims creating a Caliphate across the Middle East? Here’s my prediction for the end of ISIS, two years ago. But fear not, radical recruitment is way up under Trump. The long term prospects of the crazies of the world are always better under a Republican’s watch, here or abroad. Islamic extremists remain grateful to the GOP for keeping them in the game. Black Flags Matter?

This is a Pokey post rebuttal and his main points are in bold.

First off, a quick point-clarifier about our last bout: in his book Trump & A Post Truth World, Ken Wilber stressed how all human problems are just a symptom. To get to the root cause of our societal woes, Wilber encourages doing the inner work and evolve our consciousness as a species, accordingly. Consciousness theories aside, today’s political symptoms—not the cultural ones, but the political ones—are almost invariably Republican in nature. This is the distinction I was trying to make. Pokey’s insights into our devolving and amoral culture are important and often accurate, but his political assessments, like most Republicans, are either exaggerated or flat out false. So if you think Barack Obama was as or more incompetent than George W. Bush, or Donald J. Trump, you’ve clearly lost all political frontal-lobe function (PFLF).

If the Affordable Care Act would have saved the average American family 2,400 dollars a year, we would not be having this conversation, period.

Really? You can’t try to endlessly kill something and then cheer it’s demise. It’s like getting a plant, not watering it, and then saying, “I told you it would die!” After a bumpy start, the ACA was right on schedule, well, had Republicans watered the original law when asked. It was meant to be a stepping stone to Single Payer, which admittedly comes with its own challenges. Liberals were simply trying to emulate what most western societies have already accomplished. While these same programs come with about a 90% approval rating across the globe, TrumpCare hits a whopping 17%. So next time just water that shit.

If the Arab Spring in Egypt and the overthrow of Libya would have brought about the Democratic paradises promised, maybe the Democrats could have made a case for themselves. But no, the Egyptian revolution brought increased power to the Muslim Brotherhood, and the Libya uprising brought more power to ISIS and of course the Benghazi debacle.

You couldn’t resist the “debacle of Benghazi” part, could you? It’s a condition. After the 7th investigation, the lead witch hunter, Trey Gowdy, concluded, “Nothing could have saved those men.” Of course, he’s wrong, Republicans could have funded embassy security instead of gutting it the year prior. Here’s the score: 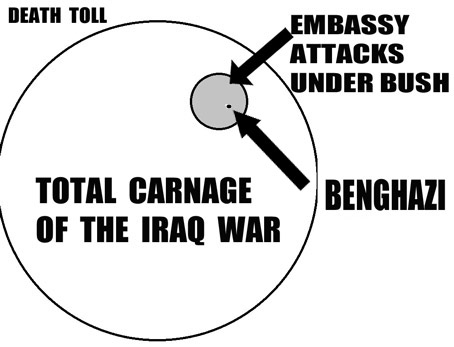 That Benghazi dot should be even smaller. Everyone get out your magnifying glasses so we can focus on the real problem …Benghazi. All the deaths in that circle are the result of an actual lie called the Iraq War, which was perpetrated by a known war criminal and former president.

The road to Kaddafi started with Hussein. The Bush Doctrine was to topple Iraq, Iran, Afghanistan, Yemen, Syria and Libya. While I blame the guy who intentionally set these dominos into motion, you blame the guy who failed to stop said dominos …as they were falling …amidst a regional uprising. Nice. Whereas the Obama Doctrine touted a light footprint in the Middle East, the Bush Doctrine makes sasquatch look like Douglas Fairbanks after a decade of foot-binding. 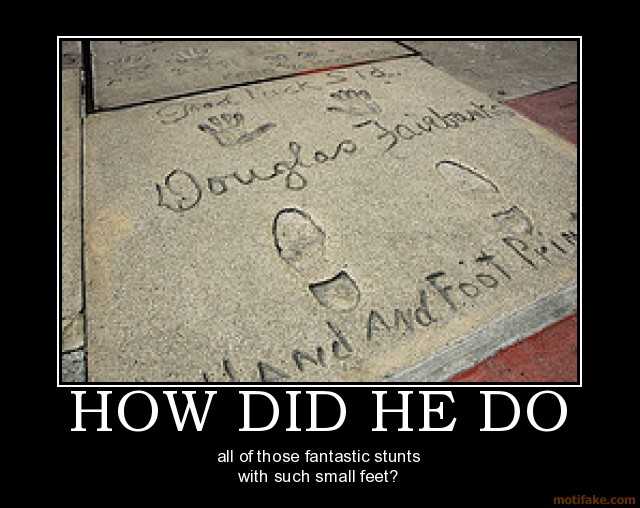 If there had been any meaningful cuts in spending in the federal budget, the Democrats would have at least a shred of credibility. Remember the economic crisis of 2007-2008, where the federal government assured us that we needed to spend trillions of dollars to stimulate the economy.

Yes, I remember it, which is why I championed the Simpson-Bowles ratio of stimulus to cuts, while you championed austerity only. We’ve been through this and, as it turns out, you’re still wrong. And where is this shred of credibility on the right? Are you seeing things, Poke? Sure, Obama lied a couple of times over his eight year tenor, but Trump topped that during this morning’s tweets, during his morning constitution (which is the best thing he’ll likely do …Constipationally).

President Obama rightly pointed to the Bush administration’s increased unconstitutional intrusions and surveillance of the American people. But after he was elected, we learned that the Obama administration increased government intrusions through the NSA and the IRS, among others.

Sure, NSA surveillance is my biggest Obama complaint, and yet…

While every Republican signed onto the Patriot Act, including Pokey, Obama and Zano voiced their objections while this was being made legal. I also then predicted that no president, post 9/11, would roll these expansions of power back (certainly not any decade soon).

Don’t worry, I’m sure Trump is going to fix this shit. He knows Absolute vodka corrupts absolutely. In his defense, he needs to hear what the Rosie O’Donnell’s of the world are saying about him. No really, it’s a psychiatric condition. This does not excuse Obama’s expansion of the NSA program, but it was all predictable, which is *cough* why I predicted it.

If pressing the “Russian Reset Button” would have done more than to give Vladimir Putin a “chubby” along with 20% of America’s Uranium, then maybe…

The Uranium One story is the next Benghazi. Trust me. There’s no magnifying or catastrophizing necessary under Republican leadership. Libs can just cover what Republicans are actually doing, in broad daylight, based on their own admissions, actions, and press conferences. Putin did not fair well under Obama, but with a weakened EU and a mentally ill U.S. president, you’ve given that former KGB guy everything he wanted for Christmas.

“If only Hillary Clinton had squirrel-suited into Benghazi that night to save those men, and if Obama’s fledgling healthcare plan had survived the constant Republican bludgeoning, and if he had undone—not just most—but all of W’s unconstitutional expansions of power, I would have found it in my heart to have voted for the competent chick over the brain dead despot.”

It’s time to see the Republican party’s game plan for what it is, Poke. Republicans have weaponized a slew of wedge issues, like abortion and gun control, to rally the uneducated to aid and abet them in shifting all of our resources to a handful of people (see: this week’s tax plan). And, despite even the faintest precursors of talent, they continue to succeed beyond their wildest expectations.

Pokey also remains unaware of the pending constitutional crisis baked into the Russia-probe, just like he was unaware of the consequences of the post 9/11 overreaches and abuses. When each legitimate crisis goes unnoticed until the final hour, when will Republican voters realize they’re being duped? Trust me, Sean Hannity will be covering Uranium One-style drivel right up until the day Ass-Clown is dragged out of office.

One thing remains consistent on this multi-decade blogging odyssey: one side sees monsters where there are none, and then the other side is forced to contend with the orangey shadows they create.

Or, the slightly different version: 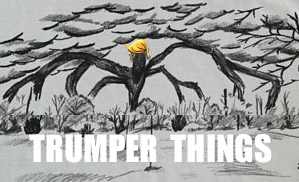