This week David Corn over at Mother Jones wrote an article explaining the inexplicable rise of Donald Trump. I wrote a suspiciously similar article, prior to Trump’s emergence, last August. I find The Donald’s popularity with the republican base quite explicable. It’s not the similar image that irks me so much as the similar content. I saw this shit coming a vile away. I love you Dave, but you have two choices: hire me at Mother Jones, or expect a call from a Mr. Goldberg of Goldberg, Goldberg & Cohen. What’s really inexplicable is how spoof news folks continue to outshine our more traditional journalists. Mother Jones is welcome to join the Daily Discord. With your skills and my prognostication prowess, I’m sure Mother Discord will become a beacon of clarity in these dark times. Thus Spake Zanothustra?

These images are very different (cough), I went with fat Trump and he went with skinny. Sorry, he’s going to get fatter, Corn. You’re wrong about that too! I realize you’re probably not one of the five people who actually read my article, so you’re forgiven. I don’t see the GOP as a slow moving train wreck; they’re more akin to Fukushima Meets Sharknado: This Time It’s Plutonium! Fine, I couldn’t work uranium into that joke.

I knew The GOP was in real trouble the day Trump got a bump after making fun of John McCain, a war hero. That incident inspired this Discord joke: 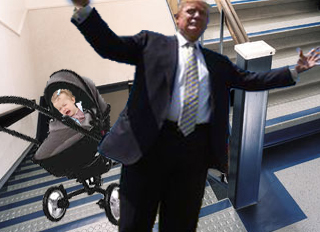 I’m afraid the tumor is too great, removing it now will kill the patient. Sorry, but you were warned. What part of modern conservatism is not a cancer? The views as espoused on AM radio and Fox are malignant and effect every organ of the Republican Party. There’s no longer any ‘heart’ at the heart of your party. It’s a shame none of you bothered to notice. In today’s political reality, Trump’s mean-spiritedness resonates through every corner of the Twi-right Zone, because that is what it was intended to do.

And it (obstructionism) only intensified once Obama took office. Of course, much of this was fueled by the conservative provocateurs and windbags, led by Rush Limbaugh and the like.” And: “In recent years, they (republicans) have fomented, fostered, accepted, and exploited the climate of hate in which Trump’s candidacy has taken root. For the fat-cat donors, special-interest lobbyists, and elected officials who usually run the Republican show, Trump is an invasive species. But he has grown large and strong in the manure they have spread across the political landscape.”

It’s not just Corn, everyone’s writing the same story of shock and disbelief. Only recently did journalists start to realize there’s no longer any conventional wisdom in conventional wisdom. Meanwhile, I have been saying for nearly a decade the polarization would continue, the descent of The GOP would worsen, and it would eventually become critical by the end of Obama’s second term.

The problem is no matter how wrong republicans are, regardless of the issue, their answer is invariably to shift further right. If Trump’s wall doesn’t work, it wasn’t tall enough; if Cruz’s carpet bombing doesn’t work, it wasn’t carpet-bomby enough. When in doubt, double down on dumb. I have seen no deviation from these deviants. The GOP is desperately trying to find that perfect “real” conservative…you know, an asshole. This graph explains everything: 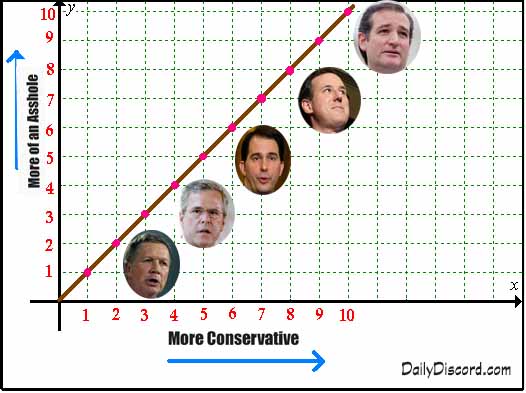 Trump is a bit of an anomaly. He’s an asshole, for sure, but he’s all over the map ideologically. He’s literally a wild card and many republicans are willing to take a chance on a wild card. They’ve looked deeply into their souls and they’re willing to overlook a few of Trump’s liberal sensibilities. He’s effectively made up for these ideological shortcomings through the sheer malice he’s shown on so many other important issues. “Mexicans are rapists!” Wait a minute, then if he lets them build this wall along our southern border—

[Glory hole border fence joke removed by the editor. Jesus, Zano, what is wrong with you?! —Pierce Winslow]

I wasn’t entirely sure The Donald would get the nod, but I did predict he would last long enough to destroy his party. I have focused on the devolution of The GOP for so long on this blog because I knew it would be linked to our undoing. “I maintain that 40% of our country is prepared to prop up a conservative more damaging than Bush.” (Zano 2011.) Sorry Dave, but back in August I already knew Frankentrump was: ALIVE! IT’S ALIVE!!

“Grafting together a hodgepodge of red tissue and dead issues, the rightwing media has spent the better part of the 21st century galvanizing an angry zombie army of the politically clueless. This faction has a new leader, but the monster of their own creation has officially lurched off the table, broken down the castle door, and is apparently golfing in Scotland.”

For years, Republicans have served up the reddest of meat to their rabid base. This has only increased their crappetite. I’m still worried their demise is taking too long. Hell, The GOP is close to a super majority—at a moment in time when their political party should be holding up a sign on a corner somewhere that reads: Will Cut Taxes For Food. Of course, liberals are infuriating me. They want free college but they won’t show up to vote? We’re not feeling the Bern because young people are all burning one somewhere. What’s going to happen in November? Everyone thinks their banks will always be open and their credit cards will always work, when nothing could be further from the truthiness. Hipster’s unite, form of, not too stoned on November 8th.

“We’re mad as hell and we’re not going to take it anymore!”

I think after watching the Super Tuesday results, I think it’s more like:

At this rate, if we do legalize pot in all fifty states, just the KKK vote alone will probably be enough to win the day in 2020. David Duke and Sarah Palin 2020. The current State of our Union makes Charlie Sheen look like Mahatma Gandhi. Dem turn out was terrible yesterday. It’s apathetic hipsters vs scared stupid. Fear is a motivator and marijuana is apparently not. We may be watching the end game for our sovereignty as a nation playout in this sad political process. More importantly, if I can work a glory hole joke into any given article I feel some sense of accomplishment, but don’t let that dissuade you, Dave!  You should still hire me over at Mother Jones! My contract expires with The Discord in 2040…well, if I keep pissing off Mr. Winslow I may get out early on bad behavior.