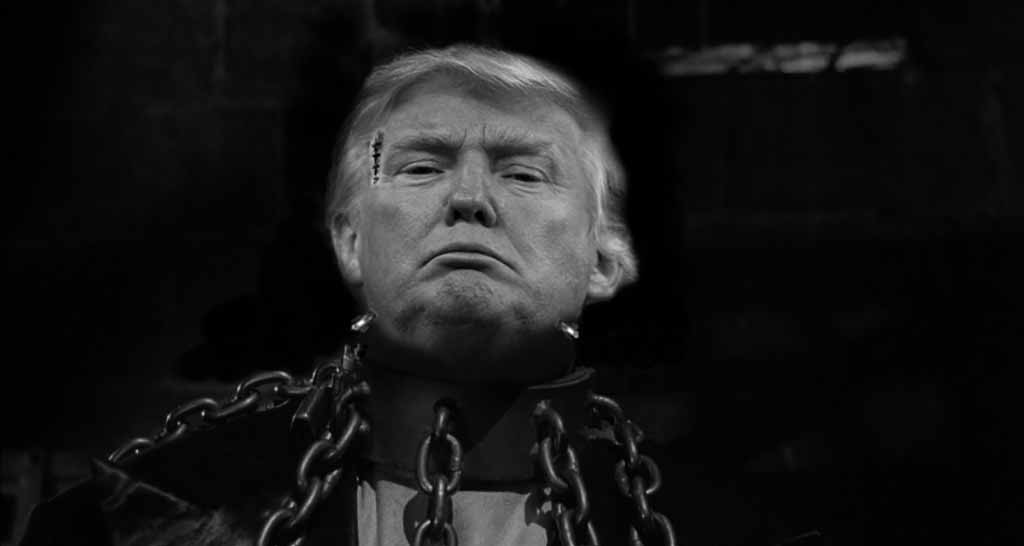 Grafting together a hodgepodge of red tissue and dead issues, the rightwing media has spent the better part of the 21st century galvanizing an angry zombie army of the politically clueless. This faction has a new leader, but the monster of their own creation has officially lurched off the table, broken down the castle door, and is apparently golfing in Scotland. People of Scotland: please monitor all little girls sitting near ponds or wells. At the moment, there’s only one person who controls the republican bubble and it’s alive…It’s ALIVE!!!!!

This monster will not go gently into that good right. The republican’s angry creation resembles a megalomaniacal Young Frankenstein with Tourrets. Crabby Normal?

[Meglaladonald joke removed by the editor]

What’s funny is how the rightwing crazies lost control of their dark creation. To put the state of their union in perspective, the saner aspects of the Grand Old Party are backing another Bush.

So today’s GOP spectrum starts with:

You’re voting for Jeb? Are you people Fucking Batshit!

You’re voting for Trump? Dear Merriam-Webster, please come up with a stronger word for batshit.

Of course, the right would immediately say, “Well, you’re backing another Clinton.” Umm, Bill liked to F interns, while George liked to F economies. There’s a big difference, one that should not require further explanation. 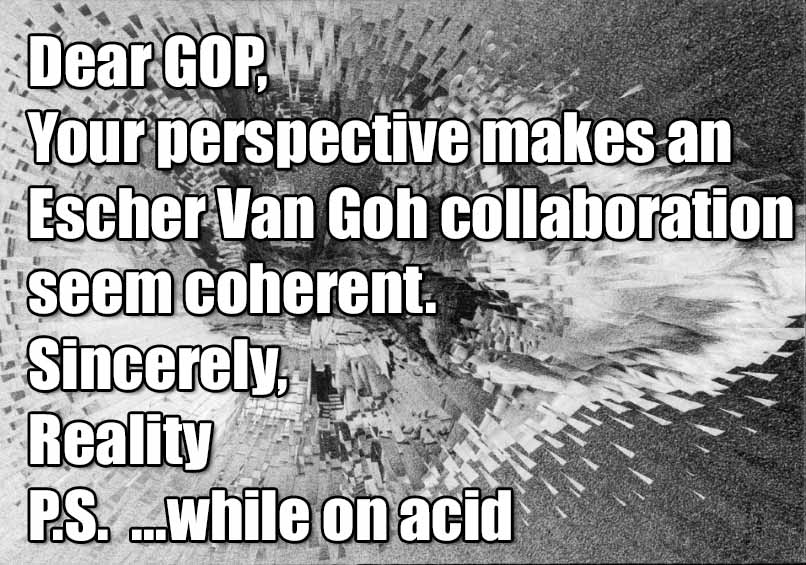 Here’s Perry representing the Are You People Fucking Batshit side of the party:

“Trump personifies a cancer on conservatism…He’s a toxic mix of demagoguery, mean-spiritedness and nonsense that will lead the Republican Party to perdition if pursued.”

I’m afraid the tumor is too great, removing it now will kill the patient. Sorry, but you were warned. What part of modern conservatism is not a cancer? The views as espoused on AM radio and Fox are malignant and effect every organ of the Republican Party. There’s no longer any ‘heart’ at the heart of your party. It’s a shame none of you bothered to notice. In today’s political reality, Trump’s mean-spiritedness resonates through every corner of the Twi-right Zone, because that is what it was intended to do.

“Donald Trump is the modern-day incarnation of the know-nothing movement.”

Fox didn’t create a swath of paranoid, bigoted know-nothings, but they do stoke their fire each and every news cycle. Red MeatUp groups? Now we’re seeing the results of such tactics. Angering and misinforming millions of predominately older Americans will have consequences—consequence I hope will culminate in the form of a Weekend at Bernie’s.

Like the rest of the Foxeteers, The Donald simply parrots what’s been told to him over the years. Aside from a few interesting business ideas, Trump’s approach is mostly regurgitating Fox News talking points over golf. The course whisperer? This phenomenon is happening all over the country, in every gym, in every bar, and around every water cooler. He is the voice of the talking point people (TPPs) and all the anti-psychotic medication in the world won’t help. Strong work, republicans. For all of your efforts your hatred, bigotry and misogyny is coming home to roost. The Trump phenomenon was predictable and avoidable or, as Sarah Palin would say, prevoidable.

Of course, some would say, Bernie Sanders is a socialist so the libs are getting pretty radical too. Again, there’s a big difference. While Bernie is brilliant old coot who could effectively run our country, Trump is …well…old.

Then there’s this truly absurd statement:

“Trump represents the Winston Churchill of our time.”

Really? I thought Savage was always one IQ point above Limbaugh. My take here.

I predicted that something extraordinary would happen in politics in the lead up to the 2016 election. I don’t believe this will come in the form of The Donald, but he may well be the catalyst for the absurdities to come. Trump is only the messenger—the Harbinger of Dumb. Trump is the current manifestation of the group I’ve been covering for so long with both dread and wonder. At some point his candidacy will collapse and the death of The Donald may well create the weird unknown event to comb-over…er, to come. Toupee or not toupee, that is the question!

I agree with Rick Perry in one sense; Trump will do some significant damage to the brand. Every nominee on the right tries to draw the crazy line in the sand by their own feet, but last week’s radical just isn’t radical enough. At some point even republicans will have to take notice of the drooling basket case they’ve nominated to run the country. They’ve been doubling down on poor ideas for so long they might actually bend the laws of physics. I did this once by getting Maxwell’s Demon to use Occam’s razor on Schrödinger’s cat. It was informative, but really terrible. It  does seem like republican infighting is splintering this party like Pinocchio in a Saw movie. In this vacuum of sanity, the Foxeteers will forever glom onto the next walking talking point of the moment. On that note, I think you fed The Donald a little too much red meat this week. 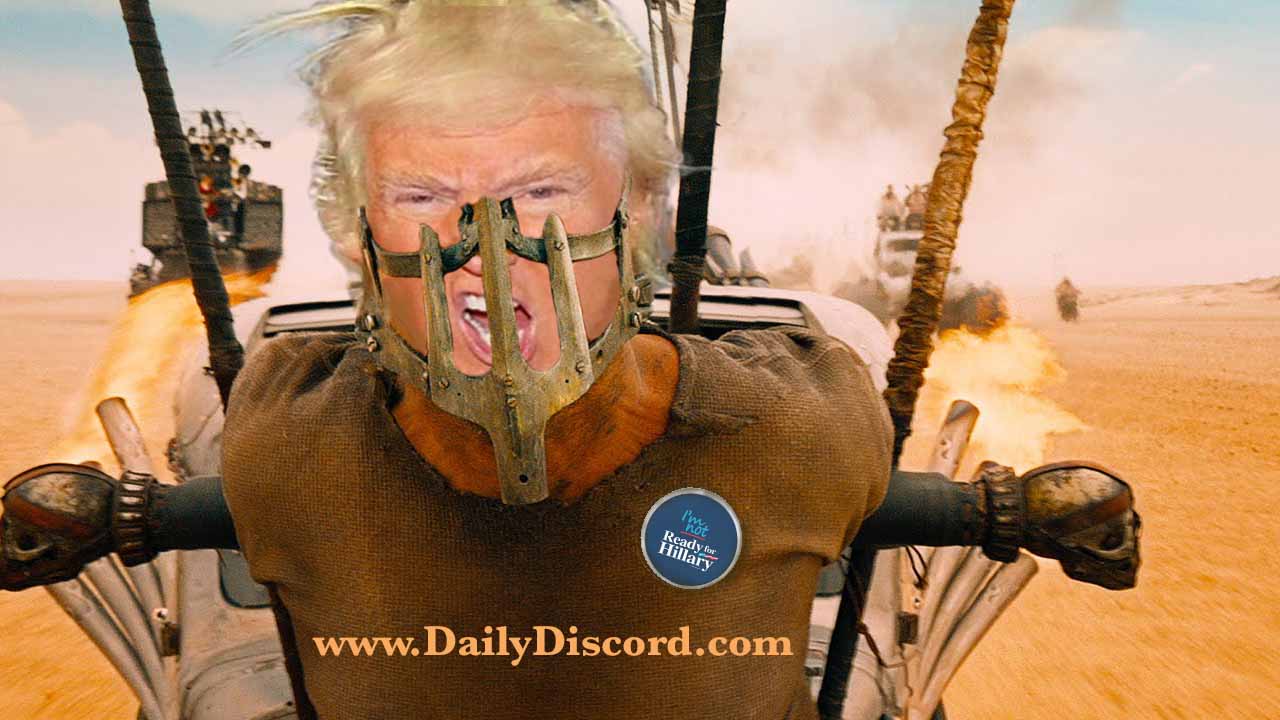 Good luck in the debates. This is what you get for weaponizing stupid.