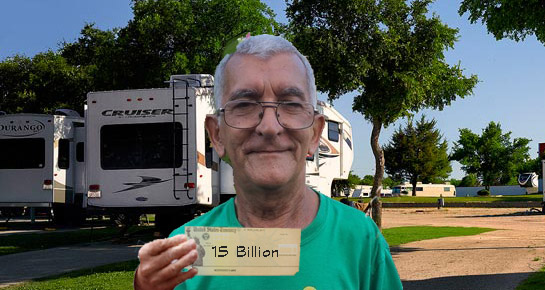 South Houston, TX—All of the latest federal relief funds designed to get Houston back on its feet arrived in check form to the RV park address of one Harvey Ford of South Houston. The Trump Administration is downplaying the mistake and delegated blame to an under-under-secretary, currently under some Congressman. Upon receiving the check, Mr. Ford said, “After the storm I was just happy my rig wasn’t flooded, but now, with $15-billion in my savings account, I may purchase the remains of downtown Houston. Actually it’s more than $15 billion, because I already had over a thousand in there.”

Mr. Ford told the Discord today, “When I first glanced at the check I thought, wow, I really fucked up my taxes this year. Then, when I realized what happened, I thought, hot dang, there’s going to be a party at the RV park tonight! I know a lot of people’s lives tend to get wrecked by such vast amounts of money, but I’m not going to let that happen, no sir. I plan to use all of this money wisely, like by booking Beyoncé to sing at my 75th birthday next week.”

Mr. Ford intends to be charitable with the money as well and has already agreed to set aside some of his “winnings” for charity. “I want to give something back to the people of Houston, like both my ex-wives. They can be used for scientific research, or something, right?” said Ford.