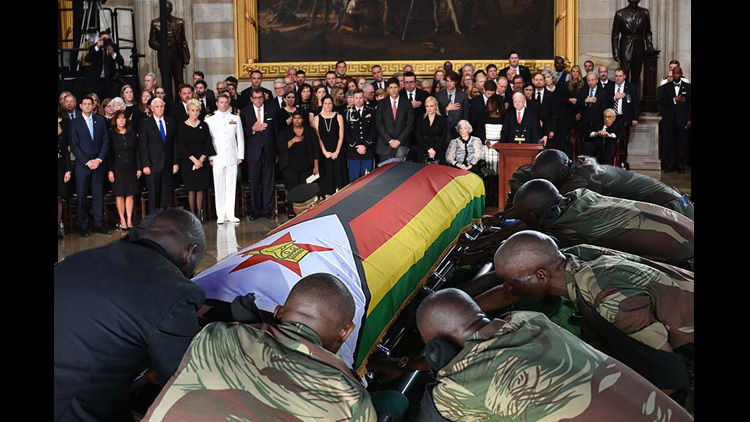 Tweet Tower—Long time leader of Zimbabwe, Robert Mugabe, has died today in Singapore at the age of 95. In a surprise move, President Trump has granted this notorious dictator an honor granted to few others. The body of the man who seized Zimbabwe’s budding independence and stomped it out before bankrupting his nation outright will become the 32nd person to Lie in State at the Capitol Rotunda. When asked about the controversial decision, the president said, “I feel strangely connected to this guy. I mean, I usually prefer white strongmen, but we’re supposed to be a more inclusive party, right? Besides, I really wanted to change the subject from Sharpie-gate. And by the way, it was windy in Alabama the other day. I talk to people, you know #ReallyWindy.”

Henry Clay, the first to receive the honor in 1852, was eventually ticketed for loitering before being moved to nearby Arlington Cemetery. Since then a total of 31 individuals were granted this prestigious honor. John McCain was the last person to Lie in State, which irked the president greatly as his twitter likes dipped significantly over that same period. Apart from being a known maverick, McCain was accused of having functional frontal lobes—a condition almost unheard of in today’s republican party. However, next to Grover Cleveland’s decision to bestow the honor to his mistress, many are calling Trump’s Mugabe decision the most controversial.