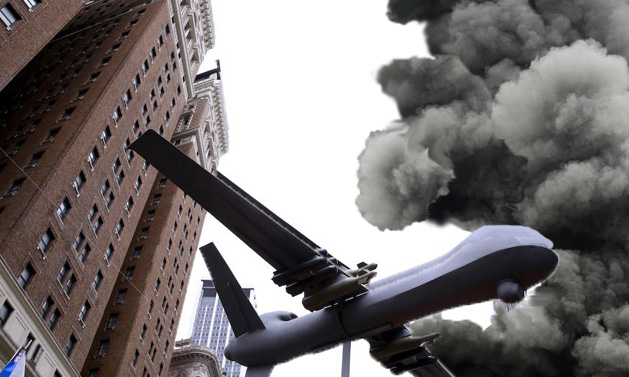 Washington—The White House is denying allegations that the bombing of three separate banks believed to be housing the president’s financial records was intentional. The Pentagon has confirmed three US drone strikes have leveled Capital One headquarters in VA, the US headquarters of the French company, Mazars, in NY, and a third location at …some Deutsche bank. The White House is maintaining these are unrelated incidents that the president himself is calling “collusional damage” and “tax erasetion.”

The acting-acting-acting Defense Secretary, Bob or something, told the press today, “The strike order came from Rudy Giuliani, not the president. Wait, I’m being told these were random attacks. I mean, mistakes. Granted, two of these mistakcidents occurred almost simultaneously, but there was a six hour difference between the US bombings and the one in Germany, which …wait, I’m being told there’s a time zone difference. Don’t kill me, Mr. President! You don’t want to face the possibility of an acting-acting-acting-acting Secretary of Defense! He’s a real douche! Remember the prime directive, ill-kay udyray iuliani-Gay. I just resent you the link for the Pig Latin generator on a secure channel. And don’t worry, Mr. President, we have more drones at your disposal! We can get McGhan too, just like we talked about! I mean, get him a nice Christmas present. Ahn-McGAY onedray ikestray omorrow-tay 4:00AM Oom oom-bay ☢️. I have taken the liberty to resend you that nuke/radioactive emoji on a secure channel.”

[Retraction: we’ve taken the word liberty both from our country and that last entence-say.]

Insiders believe the strikes were ordered by the president to ensure his tax returns remain private, and/or rubble. Al Capone was unavailable for comment, but Geraldo is still live on location from his vault. Meanwhile, Devin Nunes is refusing to comment on the bombings, but he did mention a wholly fictional drone strike Obama once ordered on a Poughkeepsie Taco Bell, after what the Secret Service is calling the cold chalupa incident (CCI).

[Bay of Pigs-Latin joke sent to the generator for further translation.]