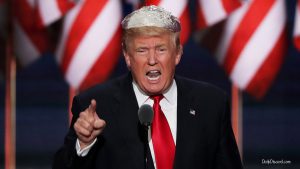 Tweet Tower—President Trump signed an executive order, today, demanding that former President Barack Obama vacate his head immediately. The White House was originally calling this a series of ‘wire tapping’ incidents, but is now referring to them as ‘voices’ inside the President’s brain. Trump describes these voices as incessant and derogatory. Fine, he said, “They’re constantly saying nasty shit! Very nasty shit, these voices! Bad! Very bad!” In an attempt to drown out Mr. Obama’s unwanted input, the sitting President of the United States has enlisted the aid of NASA. In response to the President’s desperate request, NASA has created a substance to block these liberal transmissions, a presidential-grade Aluminum foil called Reagan Wrap.

When asked why Trump thought the voice in his head is originating from his predecessor, Trump said, “The voice sounds like Obama’s and it keeps telling me to hurt myself, which is ridiculous. I am way too valuable to the free world to do such a thing. The world would probably just end for everyone, so I keep a picture of Nancy Reagan in my wallet to remind myself to ‘just say no’. A young hot picture of Nancy, of course, not when she was an old bat.”

When asked how the Aluminum foil on his head was any different from the grocery store variety, Trump said, “It’s better. This is real USDA prime choice foil. And all the foil you see on my head is mine. It’s natural. It’s not a foil over. That’s more fake news. Just don’t chew on it. No really, the same comrade who made me stick my tongue on a frozen flag pole a few weeks ago, made me chew on some foil yesterday. I’m not calling you anymore, you Russian jerk! Not worth the headache, or the weird tooth pain either.”