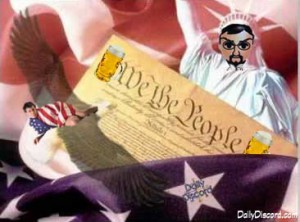 Back around 1840, Horace Greely encouraged pioneers to “go west, young man” with decidedly mixed results. He likely made this proclamation safely from a Greenwich Village pub. In that spirit of spirits, on this the first day of the week, aka Mojito Monday, I’m encouraging a shift progressiveward. Half measures will no longer suffice (see: Obamacare, or Hillary Campaign). Go big, or go Rome. We must run on a more progressive platform. Republicans keep doubling down on their wrongness, so why not double down on our rightness? Novel idea, eh? If you follow political trends, our nation tends to muddle through under liberal-centrists, but struggles mightily under more conservative leadership. So let’s do something completely different! Let’s break away from the indifferent model. We’ve thoroughly vetted the pragmatic political passivity approach, which, like that depressed body builder, stopped working out. Apapathetic?

The old French definition of liberalism gives us adjectives like: free, noble, and generous. Whether or not that fits the progressive bill is debatable, but certainly today’s Republicans seem more repressive, ignoble and greedy. Of course, they don’t see it that way, which is part of the problem. Hell, that’s the whole problem. Getting Republicans to just occasionally visit this universe would be Yuuuge! We could start with short supervised visits.

The Zano Doctrine is simple:

Rule #1: Stop working with Republicans…ON ANYTHING.

Nothing good can come from it, after all, this is a protest! What is to be gained by participating in this madness?

These say it all:

The Zeitgeist of our time = ‘veneration of ignorance’ —Bret Stephens

The Scheissgeist of our time =  ‘something gastric, this way Tums.’  —Mick Zano

Most don’t agree with this obstructionistic approach, which is not surprising. Liberals tend to play nice and allow ignorance to fester. In fact, it’s how we got here. One poll suggests that 63% of the country wants Dems to work with Trump, at least on some issues. Likewise, Andrew Sullivan recently suggested we avoid spooking the 15% of our left-leaning moderates to improve our chances in future elections. Most journalists agree, but for the last fifty years we’ve tried the same center to center-right approach to governing and, as it turns out, it really sucks. And, yes, the more right we drift, the worse (see: Kansas). How about adding some more liberal portions to the mix? Conservatism will collapse soon enough, but our whole nation will be joining them if their demise is delayed any longer. Apocalypse DOW?

Paul Waldman is also worrying less about moderates, who will likely skip the midterms anyway, and emphasizes tapping the angry base. The midterms are traditionally about anger. Republican’s are historically the experts on amygdalaic-driven voter turnout (ADVT). Their base can easily manifest endless amounts of rage, even during periods of relative stability or, in their view, anemic recoveries. And these same assholes can do this while ignoring the whole ‘we caused the collapses in the first place’ thing. Hemorrhoid rage?  I’m sure there will be plenty of angry libs in 2018, well, if Trump’s first month is any indication. So stay angry, young men, and go left! Unless to the left there’s a cliff or an open manhole, in which case make three rights.

Protect our eco-systems and natural resources through clean energy alternatives (aka, F coal and F Exxon).

So try killing two birds with one stone by stuffing your pipelines up your Secretary of State’s ass. Can you say, “justified eco-terrorism”? I knew you could. If Trump dismantles the EPA, eco-terrorism will become all the rage with the kids today, well, those kids who drink water and breath air.

So stuff your Christian soldier, clash of civilizations rhetoric up your ass. We are defeating ISIS with regional powers, but we will not ignore diplomacy and other non-military strategies. Will Trump F up the home stretch with ISIS? Probably.

Sorry, folks, dumb is not the new smart …well, it is, but it’s pretty sickening.

A focus on meaningful individual rights (aka, F the Republican-only version, or Freedumb).

So stuff your Black Guns Matter mentality up your amendment. There are other amendments in that document, although, admittedly, most have been marginalized by Republicans.

So stuff your ACA ‘replacement’ up your ass. (Hey, on a good note, that shouldn’t hurt because there isn’t one).

And, while we’re at it: F gutting our basic entitlements for those most in need to shift even more money to the 1%. Great vision …a Disparity of Health?

I’m—as you can probably tell—a bit miffed post November, but I’m not a complete anarchist. If I thought it would be better for our country if Dems worked with Republicans, I would recommend it. But I don’t. Not that I think Dems have any say at this point, but a quick Trump demise is far preferable than allowing him to actually start to implement his proposed policies. Could you imagine that? I can and…

“It aint that pretty at all.”
—Warren Zevon

My leftward ideological drift over the years is a direct result of the rightwing media’s insistence on shaving off an IQ point from their base, each and every news cycle. This administration is a travesty and the GOP has enabled this shit-show, but it has been a very effective War on Thought. For those of you still not aware of this fact: this is the Age of Information; try processing some. Maybe the Constitutionalists in our country should stop electing people who invariably trigger a constitutional crisis. Cue that Alanis Morrisette song and then cue that premise I’ve been honing for over the last decade—namely, it will come down to either all of us or them.

Make no mistake, Republicans are a mistake. RESIST …bigly RESIST.