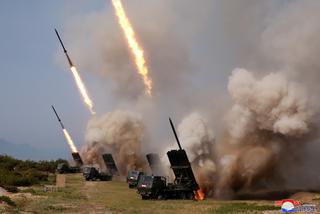 Pyongyang, NK—Kim Jong Un is downplaying both the launching of three long distance rockets this week and the decision to name each of them after west coast U.S. cities. The Supreme Leader of North Korea told the press today, “These are cities I would like to visit, to reign down a sea of fire and radioactivity, or maybe go on a bar crawl. I will let you know. Look, it’s better than my first nicknames: Trump, Pence and Kellyanne. Only need one missile for that.”

President Trump reiterated his position today that North Korea poses no threat to the United States. “There are good people on both sides of the 38th parallel, or the 39th, I don’t know I didn’t go to Nam. I had bone spurs. But if Little Rocket Man wants to go pubbing along the west coast, I’ll bring the hamberders. If someone asked me what dictator would I most like to have a beer with? I would pick him, well, after I cleared it with Putin. Or can I pick from dead dictators? In which I have some other favs.”

In related news NK Defector Admits: “All Of Our Microphones Lead To Same Karaoke Machine.”