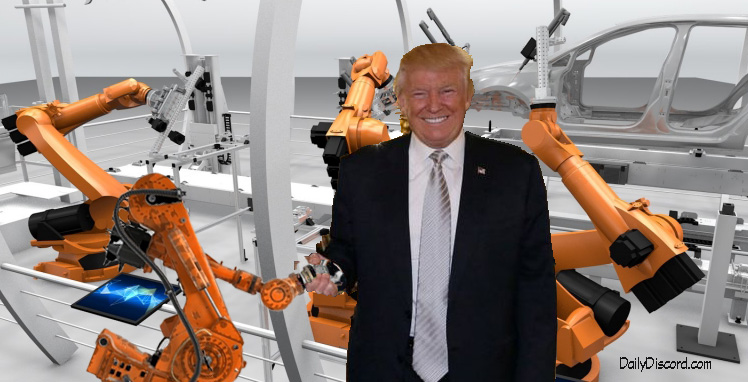 New Detroit 2019—The jobs report numbers are in and the president was all smiles today at CyberSoylent Bionics Tech. Many are blaming the President’s statistical confusion on his ongoing struggle with numbers and their meaning. One of the agency’s spokespods thanked Trump for not only putting “robots first”, but actually preferring them to people. At a press conference The White House correspondbot said, “Donald Trump has technically fulfilled a campaign promise to bring back manufacturing jobs. No further questions. Locking targeting system on four liberal reporters with their hands up. Please lower your hands and vacate the premises. Thank you, citizens!” (rapid gun fire, followed by inaudible screams.)

Mr. Trump also received accolades from his family at the event. President Trump’s son-in-law and now Supreme Allied Commander, Jared Turner, said, “This president has not only created jobs for robots, but what a lot of people tend to forget is how much he has helped the financial well being of his immediate family …and all at the expense of the American people. That’s what I call multitasking!”

Senator Al Franken (D-MN) said, “These are not jobs for real Americans, they are for jobs for machines, um, so not for people per say. And, as for the 27 actual human jobs Mr. Trump’s initiatives have created since 2017, most of them aren’t actually registered republicans, uh, they are predominately people who went to school and stuff.”

Trump responded to his critics with a scathing presidential tweet: