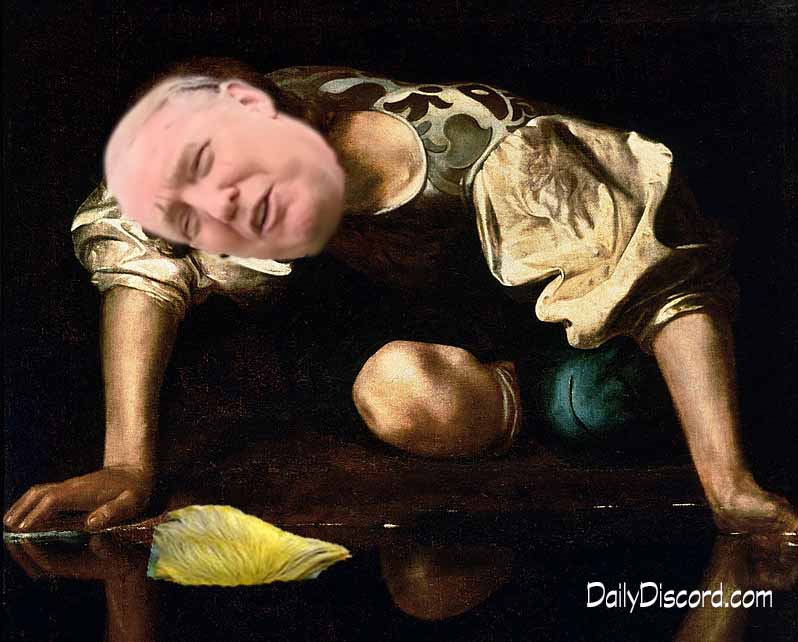 In the 21st century, the ‘Me’ generation is clearly pitted against our sociopathic CEOs and politicians. Yikes. Who does one root for in this egocentric Drudge match? It’s like watching Katy Perry and Russell Brand at a couples retreat in Aleppo, during an airstrike. Today, citizens across the political spectrum are constantly attempting to out-douche one another. If you’re the CEO of a company, you’re sick of all the entitled attitudes. After all, you earned that 100K bonus this quarter by gutting employee benefits. The rise of the ego is increasingly present in the workplace from entry level to executive management, but there are clear differences between liberal narcissism and the republican version. I’m quick to cover conservative shortcomings, but in some ways the liberal flavor is equally skewed. Think about it, libs want to end hunger, obtain world peace, while maintaining a clean ecosystem. The problem in lies how they want to accomplish these feats (via their mad Del Taco, deep-fry skills?). I see the increasing plight of both the CEO and the Sander’s supporter. It’s unscrupulous vs unconscious. It’s tough to pick sides when it’s Sunni vs Shiite. We are better than this, people! Remember, there’s no ‘I’ in ‘Team America’ …except that one.
*Huffington Post just released an article on narcissism right before mine. Bastards! Of course, Mine is better but that sounds a little…

Anti-social trends are on the rise and many factors are fomenting and propelling this ‘Me’ generation toward even more obnoxious selfy pics. Like it or not, the shift toward self-absorption in our society is accelerating like a neutrino at a CERN rave-party. Subatomic Partycles? And this is a bipartisan problem, folks. Republicans are more openly narcissistic, of course, as they believe ‘Murica first. This gives them the right to occupy and resource-rape anyone, anytime, anywhere. Triple A-holes?

“I am fine with finishing off what’s left of Earth’s resources, provided the government only stays big enough to take care of my family.”

Raping the world “just for my kin” is about as selfish as it gets. Greed coupled with their recent “veneration of ignorance” has landed them the King of the Narcissists as their current nominee. Trump is not only the most narcissistic candidate to ever run for office, but he is a scatter-brained fascist with the IQ of a turnip. Lack of concentration camps?

The millennials approach to narcissism is more covert. They cloak their own misdeeds in the guise of ‘We-driven’ objectives. Most liberal idealism seems a bit empty. They are rarely practicing what they preach. I want that six figure salary from the Save The Phytoplankton Foundation, but I’m only working 20 hours a week, bro, because I disc. Do libs really want to share anything? Their magnanimous nature does not seem horribly apparent in the workplace. The field of psychology is somewhat complicit in these disturbing trends. In the 70s Transactional Analysis was wildly popular, which emphasized the premise: I’m ok, you’re ok. This led to the idea that ‘everyone gets a trophy’ and then, voila, today we find a massive group of entitled young folks Feeling the Bern.

So, again, choosing which narcissistic cult to follow is a false dilemma, like that time you paid that chick who never did give you that—

[Fallaciti-Ho joke removed by the editor. Sadly, there’s also a variation of this in his upcoming anti-misogyny article.]
I am not immune to selfishness, but my self-absorption is focused on certain establishments and a collection of baristas and bartenders. Barcissism? We all have a little in us, unless we’re true Bodhisattvas. The Ghetto Shaman asserts that he is a Bootysttva—a practice neither endorsed by Buddhism or the American Psychological Association. Unfortunately, all of our leaders need a hint of personality disorder to get the job done, or at least that’s been my experience. There’s always a spectrum for each disorder and, as usual, our conservative friends are much further down the old personality-disorder pike. As per the DSM-V, narcissism and anti-social traits fall under the same category. There is some clear overlap. Not all conservatives are sociopaths, but if you’re a sociopath you’re probably conservative. My old diagnosis of the GOP, here. So what drives these folks?

“A lust for power, prestige, status, and authority. These (let’s call them) “objects of admiration” not only gratify their need for self-aggrandizement by feeding their oversized ego. They also provide them with compelling evidence to confirm their sense of superiority to others—probably their most coveted need of all.”
—Psychology Today

Sound familiar? Sometimes tough decisions call for an ability to put our feelings on hold, but that is a very different thing from being completely devoid of empathy. As a collective, the GOP now resides in the land of the conscienceless (my full diagnosis here). In general, corporate America has shifted our entire political landscape dangerously close to Dahmer levels. This researcher’s explanation of psychopathic-narcissism reminds me of a certain candidate:

As I’ve discussed before, republicans in general have an overdeveloped amygdala. The fear center of their mid-brain is always on high alert, but at least the blood is still flowing somewhere north of the old Mason Dixon line. Besides Kernberg’s studies, little research has been done linking fear and narcissism, but here’s his treatment solution:

“Treatment focusing on increasing self -reflection, insight, and ability for emotion awareness and regulation would in such case potentially help to redirect or alter the narcissistic patient’s decision-making.”

How many sessions will Trump need to complete before he can safely handle the nuclear codes? What continues to astound me is how our republican citizenry are actually self-biased in training. Liberals may be overly idealistic, but at least there’s a passing understanding of…er, understanding. Our more conservative friends don’t want the rules to become more fair, because they have two future plans:
1. Win the lottery (so don’t be taxing that shit liberals! I want all of it!).
2. Take that executive position in the corner office (…you know, so I can be the one to start gutting family leave).
They’re not in the position of power yet, but they defend the rape of themselves today in the hopes of one day shifting roles tomorrow. Douchebags by proxy? Look, if you’re going to accrue bad karma, at least reap some of the associated benefits. Oh, I’m being told you cut those benefits too. What?! The Friday after Thanksgiving! Fine, I’m sleeping under my desk all day in a alcohol and tryptophan stupor. True, it’s a lot like most days.
The republicans always manage to be better at being worse. They have a longstanding tradition of trying to convince the world that Obama is a raging narcissist. Even the Discord has a related story, here. This example from that riveting article says it all:

This (narcissism) was on display for all to see during Obama’s so-called Health Care Summit.  According to those keeping time, Obama spoke for 119 minutes during the session, compared with 110 for Republicans and 114 for the other Democrats.

Wow. Did you ever stop to consider how talking in complete sentences might take a few minutes longer? It’s true. It’s true. Complete sentences are Yuuge with liberals. Yuuge! I have always been impressed with how Obama handles himself. He is grace under pressure personified (GUPP). Look, every person running for president has a healthy baseline of narcissism, but it’s a false equivalency to say Obama is as narcissistic as Trump. The Donald is The Poster Child for this disorder. Even Narcissist from Greek mythology is like, “I thought it was about me, but this guy! Damn! You go, girl!” You know that Carly Simon number You’re So Vain? Carly finally admitted Trump inspired that song, which is fine because he always thought the song was about him. 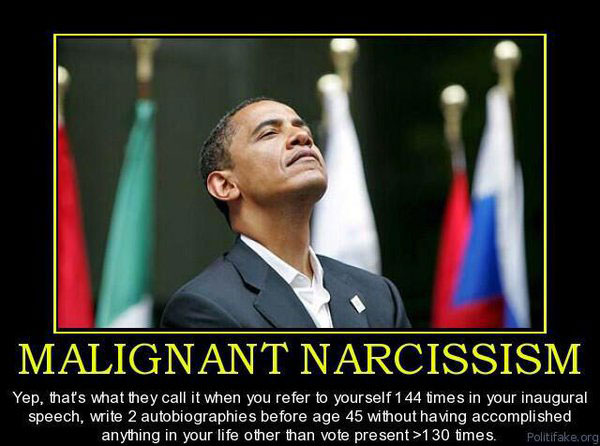 Yeah, the guy who battled to get more people insured and less people killed in senseless wars is really showing a yuuuge lack of empathy. Oh, and it’s apparently “malignant narcissism,” which means his thoughtlessness could one day spread to helping the middle class. Gulp. The latest example offered by the Breitbart crowd is how Obama had a gazillion ‘I’ statements in his recent DNC speech. So let’s look at all these self-serving moments:

“And that is not the America I know. The America I know is full of courage, and optimism, and ingenuity. The America I know is decent and generous.”
“But as I stand here tonight, I have never been more hopeful about America. Not because I think I have all the answers.  Not because I’m naïve about the magnitude of our challenges. I’m hopeful because of you.”
“I don’t know what party these men and women belong to.  I don’t know if they’ll vote for me.  But I know that their spirit defines us.”
—Barack Obama (raging narcissist)

Wow, that Obama. It’s all me, me, me. Actually, it was a powerful, integral-level speech, which explains why it doesn’t resonate with anyone. Admittedly he did have a little emphasis on legacy, but only because this speech marked his last major address as president. I would try to compare this to a republican RNC speech, but republicans don’t want their Xs showing up for this stuff. It could shatter the party’s illusion of competence. I have studied the republican brain for a long time and I’ve determined they don’t have one.
News Flash: Obama has earned a hint of smugness. After all, he spent nearly 8 years staying one step ahead of an entire political party. Andrew Sullivan used to compare this chase to the Road Runner v Wile E. Coyote, but I think this image nails it: 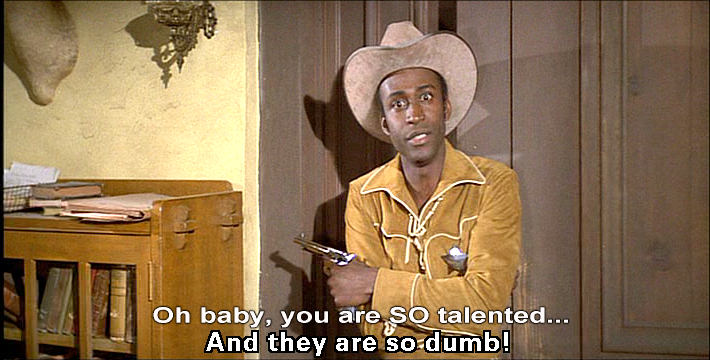