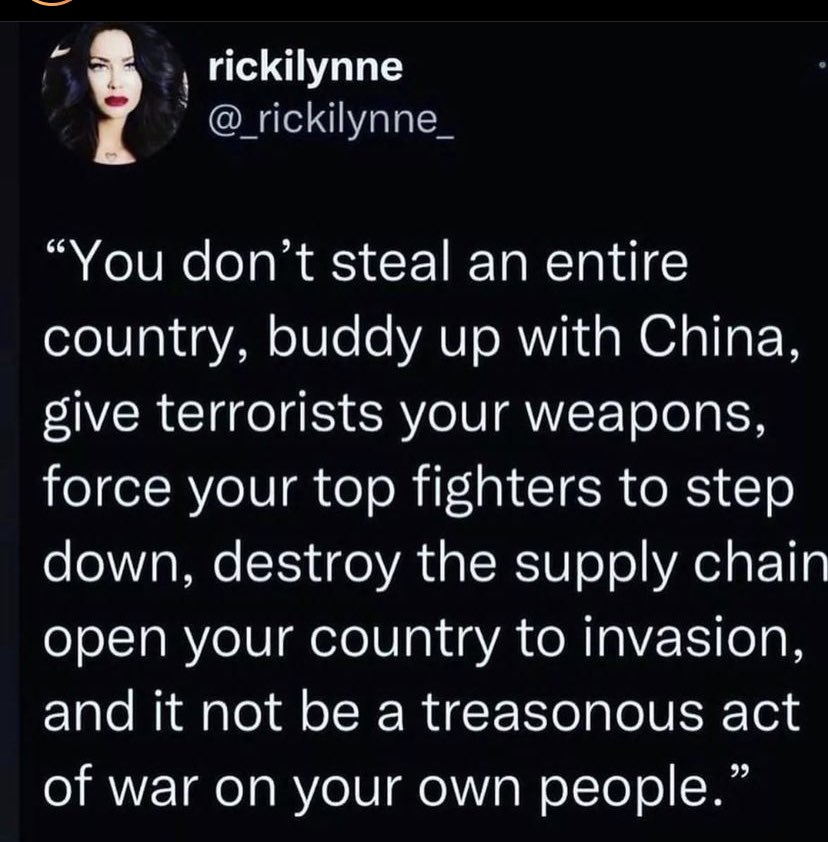 I know what you’re thinking, how could you find the least insightful MAGA meme on the internet? How could such a thing reliably even be measured? Don’t overthink this one, folks, because this is a story about non-thinking beings. I do believe this social media gem is worth reviewing, as it packs more Foxal matter, per syllable, than should be humanly possible; it’s also a further indicator of the extreme damage to the MAGA mindset. But a warning comes with this one: this contains about 20% less insight than most republican statements, which could break mathematics as we know it. And I still need that sometimes, like deciding when I should stop doing illicit substances prior to scheduled drug screenings, and the like. The sentiments embedded in this tweet are also part of the reason Biden’s approval ratings are tanking. I am not defending Biden in this piece so much as pointing out the mountain of false assumptions that passes for conservative thought these days, aka the usual.

This popped up on my social media, sadly:

“You don’t steal an entire country, buddy up with China, give terrorists your weapons, force your top fighters to step down, destroy the supply chain, open your country to invasion, and it not be a treasonous act of war on your people!”

Tis the treason to be folly, I guess. Wow. I’ll take a page from my blogvesary on this one and start with a relevant definition:

Insight:
1: the ability to understand people and situations in a very clear way: He is a leader of great insight.
2: an understanding of the true nature of something: This blogger analyzes each problem with remarkable insight.

What? Too much? Anyway, let’s break this down into small fun-size Foxal nuggets:

John Q. Republican: You don’t steal an entire country on my watch!

ZanoFact.org: [This rates as Mostly False]. Actually, this isn’t remotely true, but it’s so mind-numbingly false that to address this falseness in its entirety would require levels of energy that could disrupt the very fabric of space-time. Designating this as Mostly False is less accurate, yet safer for the universe as a whole.

Why is this still being repeated? Why do our republican friends have zero ability to read and process information? If the election was stolen, why hasn’t Trump uttered one meaningful fact on the matter? Why was such sentiments thrown out of every court in the country …with prejudice? Wasn’t Trump president at the time? He presumably had the ability to look into this, ironically, while he was busy trying to steal the election. And why did Trump hang up on NPR last week when they asked him (paraphrased): would republicans have to continue to lie about the past election in order to get your endorsement? There’s zero evidence of fraud. Kidding, investigations did uncover several Trumpies who tried to vote twice *cough*.

John Q. Republican: You don’t buddy up with China in this country, Go Brandon!

ZanoFact.org: [Mostly Fal— …uh, WHAT?!] This statement is nonsensical. This is so wrong that it might actually swing back around the universe and prove to be correct. This has never happened, of course, but our best physicists and astronomers are focusing their attention northward to see if it went so far south that it’s actually swinging back around (see: Quantdumb Boomerang Effect).

By all accounts, China-US relations in 2022 are at an all-time low. Is your understanding of the word ‘buddy’ based solely on your familiarity with the prison system? I am confused. By comparison, Trump clearly did buddy up to Putin in both a dangerous and sickening manner, so is this merely projection? If so, watch the movie Office Space and then roll that projector of yours out into a field somewhere and do what comes naturally.

Suffice to say our relationship with China is of paramount importance; it is a very complex one and, as we have discovered, complexity is not a republican strong suit. Oh, and due to its built-in subsidies and protectionist overtones, Biden’s Build Back Better would have been a slap in China’s face. Oh yeah, you didn’t vote for that, did ya Buddy?

[Buddy Hackett joke held in the dark web by ransomware.]

ZanoFact,org: [This rate Mostly False.]  Vaccinations have always been required for military personnel, but this one has turned political. SCOTUS agrees with MAGA, for now, which will open a can of worms in the future …and then you’ll have to get the treatment to get rid of these worms because no one got vaccinated. I was against the mandate, but probably not for the same reasons as you. I don’t ever want to be forced to follow the ‘scientific’ advice of a republican president. Sure, a Clorox moonshine de-wormer vax-jug sounds fun enough, but I have to be in the mood. Knowing the players involved, I was convinced that a relatively large number of healthcare and military members would choose to stepdown rather than be vaccinated. This is not helpful. But, hey, it has increased the number of Naughty Nurses on my favorite Fans Only pages. Winning!

Fun Fact 2: From the war on drugs, to the war on trade, to our actual war-wars, republicans have never actually won anything. Quite the opposite.

Look, I don’t know if these were our ‘top fighters’ or not, but I do know the military’s average IQ likely skyrocketed after the deployment of this group of never vaxxers back to Camp Stockpile.

ZanoFact.org [This rates as Mostly False]: This has an element of truth to it and, by element of truth, I mean: if this were a periodic table, I would call it an Ignoble Gas named BS.

This doesn’t even qualify as revisionist history; this is next level stuff, like maybe re-re-visionist fantasy. Yeah, the great toilet paper shortage of 2020 was created by AOC, the DNC and the ASPCA. Thanks Obama! How can anyone even address this schitznik? I for one predicted supply chains—the same ones that clearly started faltering under Herr Ass-clown—would never fully recover. There’s a variety of reasons for this, beyond Trump’s incompetence, or Biden’s incompetence, or even COVID itself. Scientists believe that to keep the US humming we will soon need the resources of five-earthlike planets. Are you secretly building them somewhere? Where are you hiding them? Not sure, but I do know where you can stick them… Hope that helps.

One of the key issues for our continued woes in this area is a failure to create workable processes with regards to foreign ports. Whereas there’s a more national and streamline approach to most global ports, according to The Washington Post the US is maintaining a hodgepodge of competing “fiefdoms.”

Our counterparts abroad seem to work better, or:

“In the Dutch city of Rotterdam, Europe’s largest port, everyone involved in a cargo vessel’s arrival sees the same information on a common data-sharing platform. Called ‘PortXchange,’ the software makes port calls ‘smarter and more efficient’ than the use of separate systems or the telephone, according to the port’s website.”

ZanoFact.org: [This one rates as Yikes!] This actually has an element of truth to it, but it’s such an appalling assessment of events that it’s the reason I wrote this bit. This is an infuriating takeaway for those of us who followed this decades long, republican clusterfuck.

First off, if you’re a republican, then handing weapons to terrorists should be second nature to you. How many of our weapons ended up in the wrong hands over the last 20 years, during two botched wars? Since no one over there ever ‘stood up’ did any land in the ‘right’ hands? You lost the wars and you’re worried about that gin still you left in The Swamp? I actually agree, we probably should have packed that.

The US military always leaves shit behind, sometimes buried, sometimes not. Usually, republicans more openly attempt to arm both sides of any conflict for profit (See: Reagan Iran-Contra), or they enrich their contract friends (see: Cheney-Halliburton).

The Afghanistan war was waged by a republican president, George W. Bush, in 2001 (see: Operation Enduring Ignorance), and the withdrawal of troops was eventually negotiated by a fella named Donald J. Trump. If Biden had not followed the pre-established timelines, he would have had to wage a new war against the Taliban (and that would have been super popular and so productive!). Oh, and Biden wasn’t handed a withdrawal plan either, because Trump was already too busy planning his own personal non-non-withdrawal plan (Operation Squatter’s Whites).

The longest war in our nation’s history needed to end similarly to that of Vietnam. The stupidity of republican escapades must always be spotlighted and vilified. You.Suck.At.This. Let’s listen to my insights from back in the day, right here on The DD:

Hey, let’s not make Afghanistan a nation building venture; this needs to be a coordinated intelligence effort to eliminate the threat of Al-Qaeda. Right, fellas?

Hey, we have been at war for five years now and the generals say we are playing whack-a-mole in Afghanistan. This will end badly regardless of when we leave, so let’s LEAVE NOW (2005-me).

Who gives a shit if we left a few toys over there on the way out? The bigger questions remain: what the fuck were you assholes doing over there? A decade long circle jerk …for a trillion dollars? Which republican politician(s) and their contractor relative(s) are going to jail for this? Did the military lie about their assessments, or was it civilian leadership, or both? Those are real questions that need real answers. Biden got us out of there. Was it sloppy and costly? Sure, but that matches every other phase of Operation Enduring Shitshow.

In my 20 years of blogging politics, republicans only seem to act against our own interests. Their wars and diplomatic foibles are miserably inept and counterproductive, well, if history is any judge. As for Biden’s actual record, it’s not nearly as bad as portrayed by crazy people. Is he doing a bang up job? No. But I already predicted the rest of our presidents will be one-termers, all will be impeached (D & R), and none of these collapse presidents will be particularly popular. No one can fix Humpty Trumpty now. That’s been my mantra.

And the last statement is a real gem among gems:

John Q. Republican: How can all of this not be a treasonous act of war on your people!

ZanoFact.org: [This one rates as Mostly …Go Fuck Yourself.]

*Oh, and I never renewed Adobe Photoshop so for privacy reasons please self-blur-out the identifying areas when your eyes attempt to focus on the headline name and facial picture at the top of the article. Thank you.