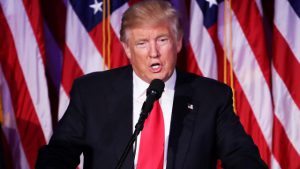 Tweet Tower—Despite attacks from the press, President Trump remained focused on the positives today, mainly, how many negatives he has accumulated in such a short period of time. When asked specifically about his promise to have more scandals than Obama in his first 30 days, Trump maintained how his administration is still on an unprecedented scandal pace (USP). “Obama had too many scandals over his eight years to possibly beat in the first month,” said Trump, “Besides, Republicans are also counting all of those scandals that were more like invented controversies. I don’t know what a Benghazi is, do you? I think they have those at that kosher bakery over on 3rd and Main. Despite all of the bullshit, we were very close to topping Obama’s overall numbers. One more week and we should be golden. See, I even have a golden showers scandal already. I did my part. It’s not my fault a few of my appointees haven’t resigned in disgrace yet.”

I hate Trump. This sucks. I think I’m going to go into the food service industry. Thoughts? I can work a cash register, and not just when I’m knocking off a joint. I have mad skills, is all I’m sayin’…  Anyone need a clerk and or to be robbed?