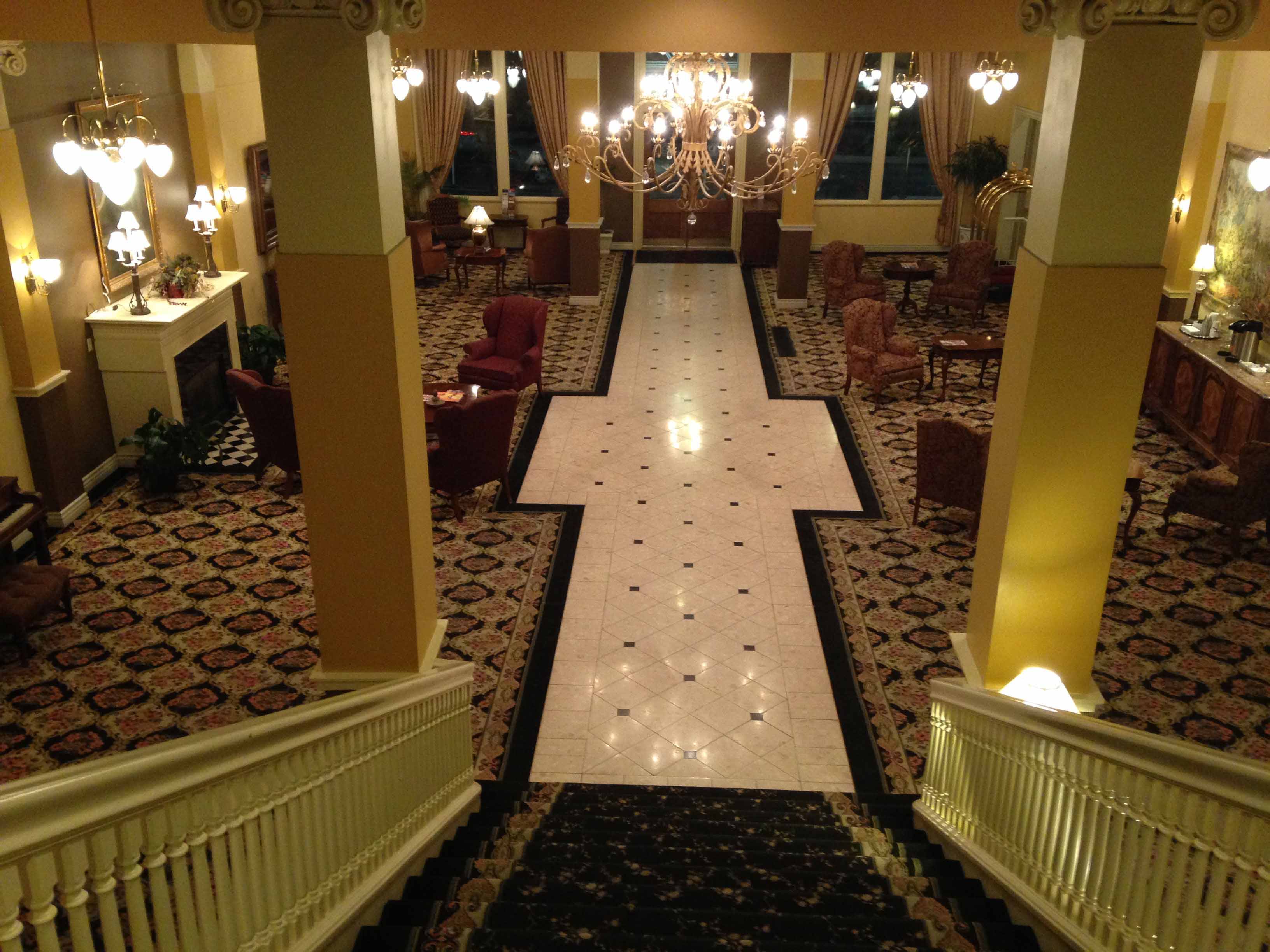 While conducting research for this important investigation I couldn’t help but marvel at the idiocy of all the related Yelp reviews. They are always fraught with such gems as: This historic hotel is friggn’ old! and Where is the skybridge to the paradise pool? Your lucky if an old southwestern structure even has an elevator. The Peery does and it’s a good thing too, because the elevator is at the heart of all the hoopla and the hauntings. This elevator has a permanent paranormal passenger affectionately known as Moaning Molly.

“I love those guys! I saw them open for the Armpit Salesmen once, back in the day, when they were keeping it real.”

Do you mind? Anyway, I left all the audio equipment back in Flagstaff, just like in our Spring Mountain Ranch investigation. For that excursion the mistake forced me to enlist the aid of SIRI (Apple’s iPhone helper) to conduct a cemetery EVP session. It was sad, even by our usual low paranormal investigatory prowess. I wasn’t about to let this shit go south again…on my watch. Good thing I forgot that too. 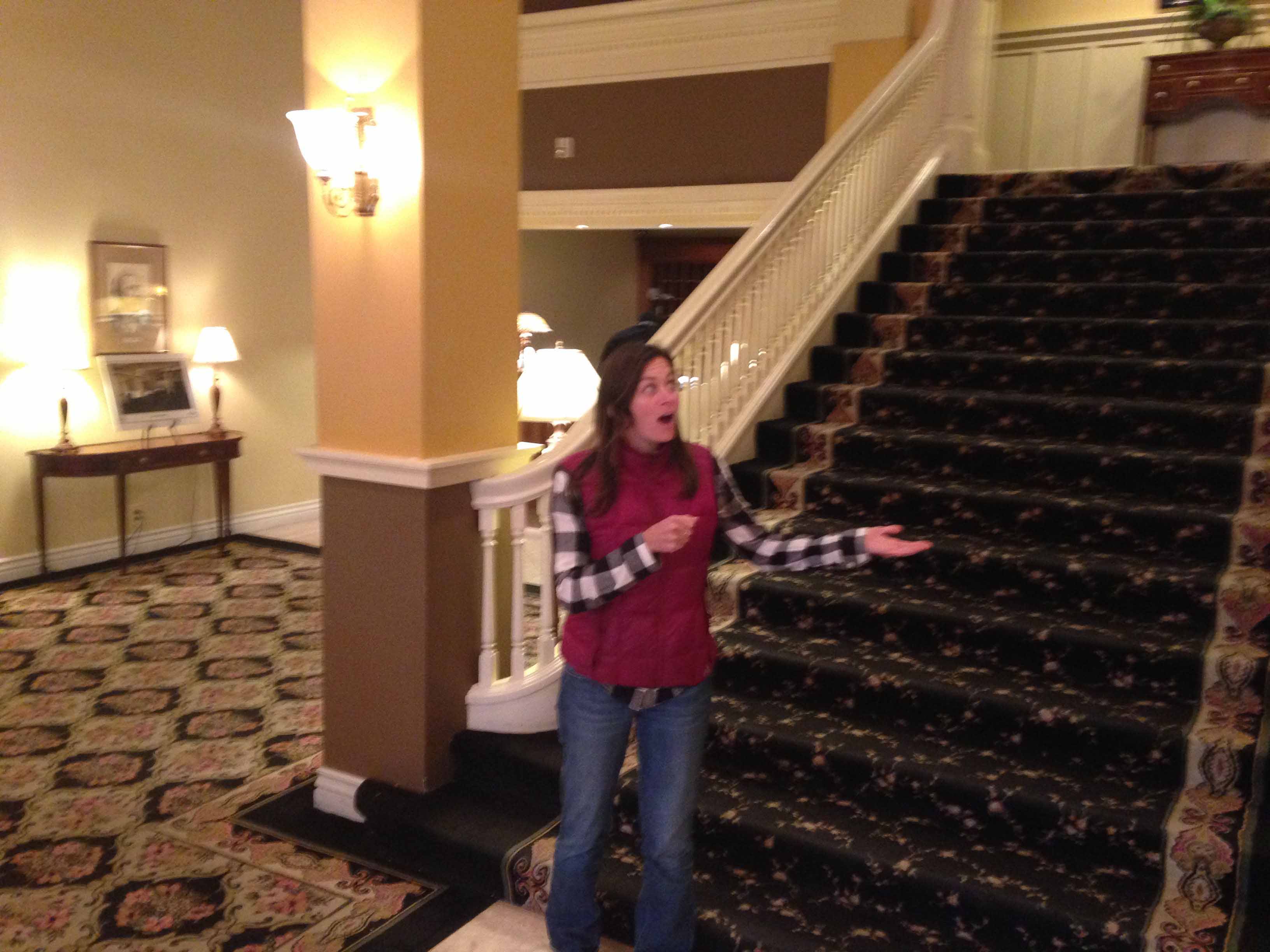 Since the show must go on, I promised Cokie I’d Photoshop a microphone into the her hand later (left). As it turns out, The Discord no longer has the budget for the PhotopShopic arts. This is probably a good thing as I doubt I would have gone with the image of a microphone, per se. Consider yourself lucky, McGrath!

No specific rooms are mentioned as particularly haunted, but most of the action appears to occur on the third floor. The most haunted floors always seem to be in the more expensive penthouse suites. Funny how that works. Dead & Breakfast? Perhaps ectopilsner is lighter than bullshit. Oh, you’re not familiar with my ectopilsner theory? It’s explained, here. I was already concerned about this trip because ectopilsner, or alcohol of any kind, is on the light side here in the land of Latter-Day Sudds. These are likely Mormon ghosts so perhaps they manifest from some other as yet unidentified mormanic substance, like pot. 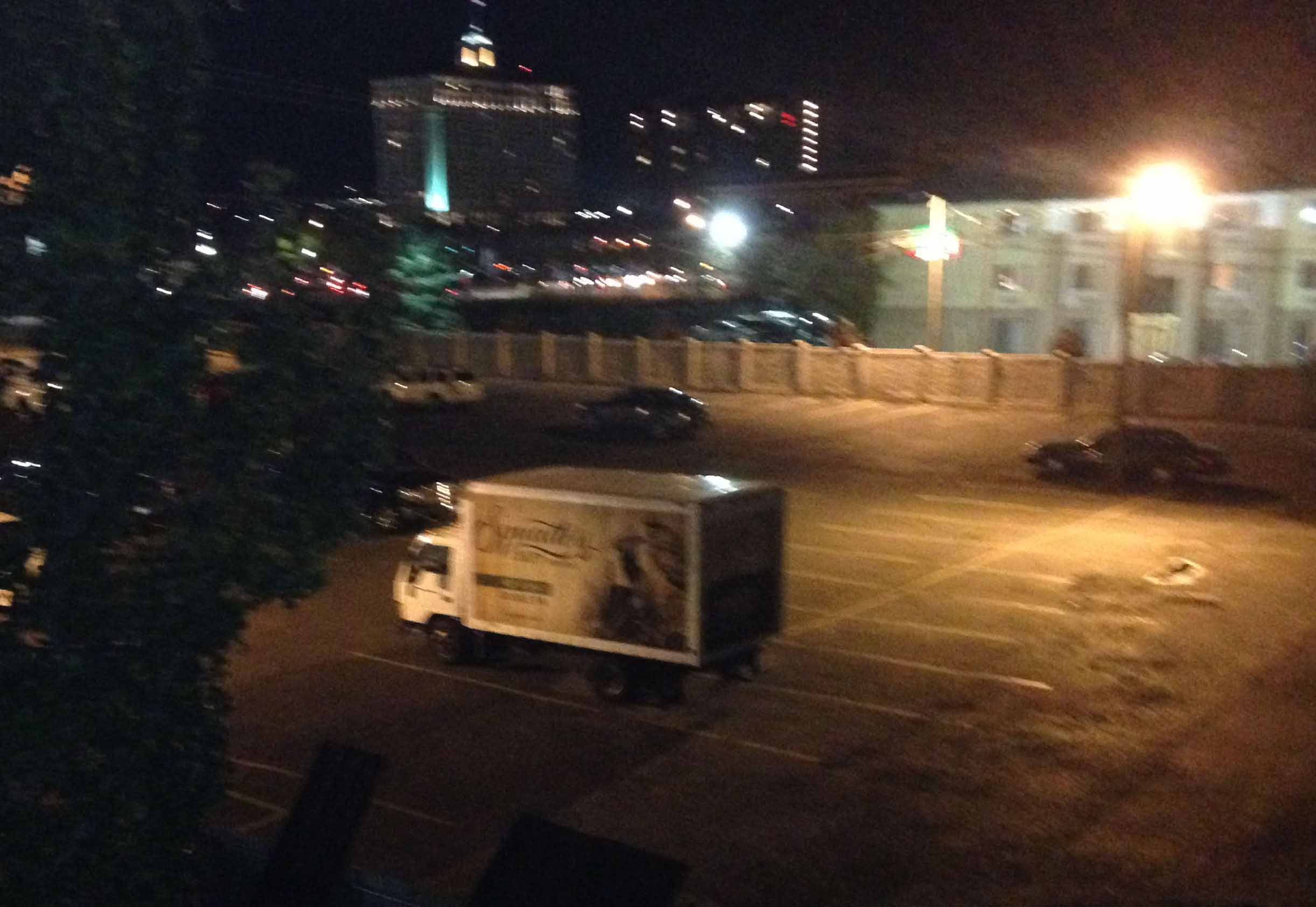 Thankfully there was a Squatters beer truck right outside my window (right) so maybe, just maybe, there was enough ectopilsner to help Molly manifest. Other reports involve moaning outside of the windows, a tall man who disappears when you approach, and ghost children running up and down the hallway. Has anyone made a report to Poltergeist Protective Services? Most of the action apparently involves the aforementioned elevator. So when I went to find this the thing, the very reason for my excursion…this is what I found: 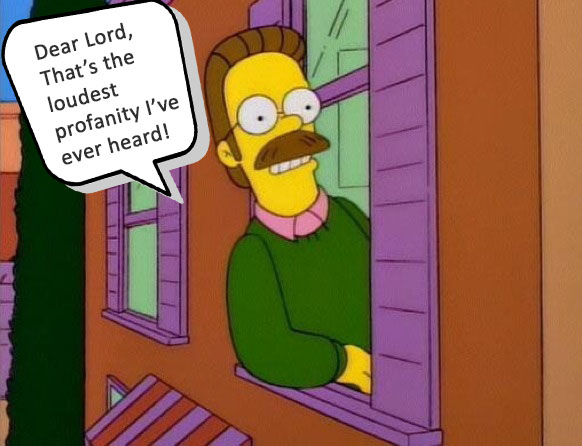 So I drove all the way from Vegas to this bleeping town for this?! ….well, I’m a professional, damnit! It’s time to go to Squatter’s Brewery and think about my life choices. So the innards of the oldest running elevator in the west lay strewn across the lower level of the hotel. What a joke! And not the kind of joke usually associated with my work. But I think I already solved this creepy caper. Were this a Scooby Doo episode I’d be pulling the mask off of the elevator repair person. This ancient elevator, known affectionately to locals as Darth Vator, probably moaned a bit. In fact, there’s been no reports of Molly’s moaning since the elevator shut down… (cough) yesterday. Yes, I have impeccable timing. It reminds me of an old Gandalf quote, “Wizards and Paranormal Investigators always arrive exactly when they mean to.”

First, I decided to let Cokie have a go at chasing out the spook: 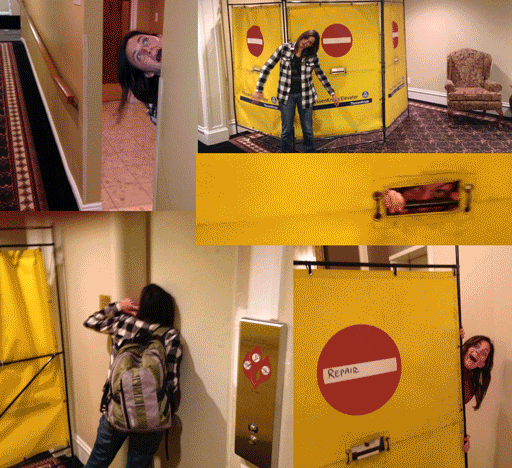 Yeah, this turned out to be an abysmal failure. No moaning, but I did groan and wince a lot. Don’t worry, you’re all going to like the new Cokie much better. So…what do we know about this ghost named Molly? She likes to go up and down and she likes to moan a lot. Okay, I’m not going to finish that thought… hell, I may not even finish this story!

Then I remembered, I have a long prestigious line of dynamic failures so I was not about to let this trip to be any different. My room was right around the corner from the elevator so how could I lure little Miss Molly back to my place? Then I snapped my fingers, elevator music! It’s perfect! The poor girl has a routine: she moans in the elevator and spooks the guests on each stop. She’s a busy banshee. As of yesterday she has no venue, so I should be able to lure her out with some elevator music!

I started with the old stand by, the Blues Brothers elevator scene: 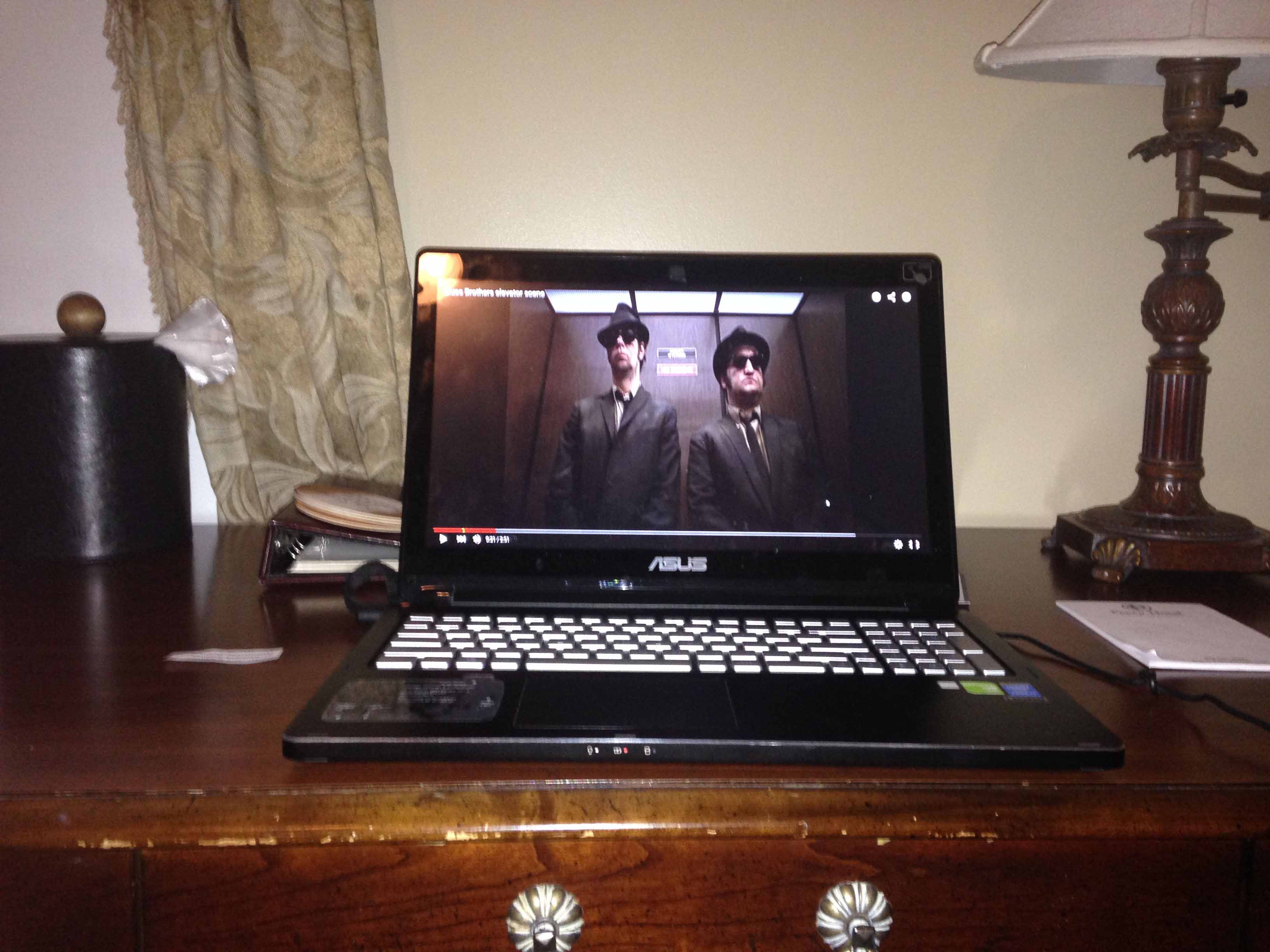 When that failed I found TEN HOURS of elevator classics from this site. Wow, this had them all! Love in an Elevator, Over Weight Capacity Blues, Chariots of Luggage. All the greats! By hour nine, however, I was starting to worry about Post Traumatic Muzak Disorder (PTMD). This is listed in the new DSM-V under Ghost Hunting related disorders.

After two hours of elevator music, I decided I would prefer a career in the food service industry. I fired Cokie, again, and I’ll see you at Squatters! Wait, they close at midnight tonight? What is wrong with these people? Fine, one more hour of elevator music but then I’m calling this thing.

Hit the button for more ghosts, cryptids and more!