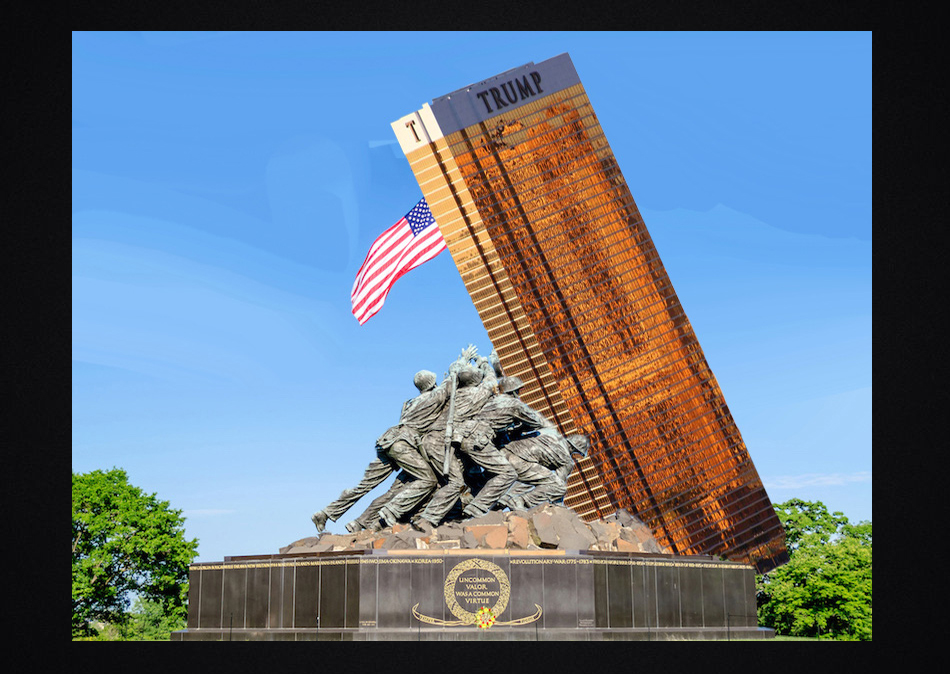 Earlier today the Navy Secretary resigned over what is being called a ‘Trumpian pardon my overreach’ scandal. Hey, someone should pose next to Giuliani …you know, after they get to him. Yesterday, China called the US the biggest source of instability in the world, which is another good reason to dump the almighty Donald. Meanwhile, the once unthinkable notion of ditching the dollar is now likely resonating with even the Merkels of the world. Two days ago we find a top Commander warning of the next Iran attack. Yeah, I don’t mind another avoidable war, but who to root for? Kidding, but how does the US manage to cede the moral high ground to even the Ayatollahs? What do you do for your next trick, republicans? Never mind. The last time I posed that question the economy Dubya’d. And, if you dare to jump into the Wayback Machine all the way back to two weeks ago, Tehran was unveiling some anti-American murals to commemorate the 40th anniversary of the hostage crisis. Oh, and they’ve managed to resume their uranium enrichment, in their spare time. Centrifuge sold separately. And the day before that, North Korea fired another long range missile as their Supreme Leader was seen riding a unicorn with a rainbow shooting out of its …wait, I’m being told that was our Photoshop team’s rendition. Keep me in the loop, fellas! I guess it’s time for us to arm all sides in this Middle East crisis, not for peace, but for some more lucrative weapons contracts.  Who knew hiring an ass-clown would bring about such a circus 🤡 😲?

The last time Muslim extremists had such a fruitful radical recruitment campaign was after the Abu Ghraib photo-shoot and the last time Tehran had such a surge in nuclear capabilities was under President Cheney. Our enemies can always count on republicans to throw them an alternate administration lifeline, which, if you’re trying to perpetuate the military industrial complex, is win win. Unless, of course, you’re more interested in long term outcomes, in which case it’s lose lose.

So what is the Trump Doctrine, exactly? Three years into this shit show and, well, this may be a Zano first, but I have no friggin’ clue. But my summary remains: America: the not-so-Great Satan.

Our president recently admitted, in a way Bush never did, that the U.S. wants to seize Syrian oil. Bashir al-Assad considers this recent confession a breath of fresh air:

“All the American presidents commit all the political sins and crimes and take home the Nobel prize, and they give every appearance of defending human rights and the ‘advanced’ and American or Western principles but they are in fact a gang of criminals who represent the interests of the American lobbyists, i.e. the big arms and oil and other corporations.”

Why am I quoting this asshole? Again, in the Age of Trump, everyone else looks like the adult in the room. In Trump’s defense, Assad does have more experience as a despot and has a better command of the English language. Even if, as I suspect, Assad’s statement is only partly true, I’m repulsed by the implications. Is blatant-resource-raping-in-the-guise-of-spreading-democracy front and center of each and every US administration? All countries act in their own self interests, but I don’t recognize the open criminality under Democratic presidents. That’s because our foreign policy under liberals is fundamentally different, in fact, it’s like night and ray …theon.

Zano: So how did he find the time to commit war crimes?

(It took a supreme effort to depict a republican voice, minus ALL CAPS, exclamation points!! and/or grammar errors.)

For those convinced Obama’s withdrawal of Iraq was similar to Trump’s Syrian version, it wasn’t, here. The creation of ISIS is mostly due to Bush’s disbanding of the Iraqi army …after he invaded the wrong country …and after he botched the occupation.

ISIS surged—after ‘The surge’—but Obama promptly ended the Caliphate in short order. Granted, their Jihadic death throes did occur under Trump’s watch and, to his credit, he sealed the deal #ObamasStratergery #DemmFatal.

Remember, George W. Bush’s plan was to topple seven regiments: Yemen, Somalia, Libya, Afghanistan, Iran, Iraq, Syria. Tragic as that decision was, let’s look back fondly to the days a republican could count to seven.

Bush wanted to sprinkle democracy seeds while his friends scored huge contract deals, but Trump’s motivation is thankfully limited to his personal wealth and prestige. Although there were other factors, Dubya’s ‘freedom seedlings’ ultimately spawned the Arab Spring, which is the main reason Syria devolved into civil war and the resulting pile of rubble that we see today.

Think of the Arab Spring as an Islamic Occupy movement, except most protestors still want to beat women and throw gays off rooftops.

[Bad Jihad Jeans joke removed by the editor and laundered.]

The truth hurts, but so does being thrown off a rooftop. Out of the three main religious sects in the Middle East, the Kurds represent the less extreme and the most reasonable allies …until last month. I too have been on a seven day ethnic cleanse, and I will tell you my GI Joe tract has never been happier.

[Winslow: that’s enough genocide jokes for this week, Zano. Our last sponsor is threatening to jump to News Mutiny.]

This blogger supported the Arab Spring, safely from my Netlix cue in Arizona, but I don’t give Trump as much shit for his recent fateful decision to pull out of Syria. Why? Because post George W. Bush: All.Options.Suck. Granted, Obama’s foreign policy will not be hailed as phenomenal for that very reason, but neither will it be considered a laundry list of MAGA-blunders.

“Since the conflict erupted in March 2011, Syria has witnessed unprecedented devastation and displacement. More than 5 million Syrians have fled the country and 6 million are internally displaced. With more than 13 million people in need of assistance, the conflict has caused untold suffering for Syrian men, women and children.”

So my question is this: how did you manage to make a pile of rubble worse, Donald?

We find democracy in action, or something more OZian, aka rockets and protests and turmoil, oh my!

“Iranian influence manages the main parties and their militias, and plays a key role in protecting their interests and dominating the state. The protests have exposed the crisis in the integrity and independence of the regime in Baghdad.”

If you invaded Iraq to make Iran stronger so we could eventually set our sights on Tehran, then let’s dust off the old Mission Accomplished banner, eh?

As a result of Obama’s fateful inaction in Syria, he avoided a third land war in the Middle East. This is hailed as his great ‘red line’ blunder by republicans, but I think it makes the man Some Kind of Grand Funk Railroad. Last night Tucker Carlson claims we were lied to about WMDs in Syria. Syriaously? I assume he’s trying to make the argument, Obama led an airstrike against Assad on faulty intelligence, soooo we’re even for the endless botched invasion of Iraq. What a dick.

Certainly Bush and Trump’s actions benefited Iran over the years (the Shia side of the equation) and/or Russia. There are also concerns Trump is allowing Putin to complete his oil empire aspirations, here, although I question how well Vlad will do with this little adventure capitalism.

Sure Trump’s recent sanction surge is crippling the Iranian economy, but this will likely only increase tensions until our president blunders us into war. Historically Iran gets bitchy. Oh, and speaking of Netflix cues an insider leaked the White House’s and, yeah, it’s: Wag the Dog, Wag the Dog Chew!, Bride of Wag the Dog and Battle Beneath the Planet of Wag the Dog.

That’s the full range of republican foreign policy prowess; they go all the way from purposely invading the wrong country to blundering us into war. Botched occupation sold separately. That’s their spectrum …that they’re clearly on.

“As long as someone makes a buck, it was for the greater good.”

The Iran Deal actually paused enrichment and allowed Iran to incrementally get its shit together on the world stage. By all accounts it was working. Now Trump is sending soldiers to help the Saudi Arabia (Sunni proxy supporters), to help re balance regional powers. This president is currently handing high tech and nuclear capabilities to the Saudis. What’s the worst that could happen? The Beast’s coverage here.

“We know that by investing in innovative solutions… like our nuclear power, exporting those technologies to other countries… being able to share our technologies around the world… that’s what this President is all about.”

This likely has more to do with Trump’s desire to do business with the Saudis, who are good at stroking his ego, then to support our national interests. Our national security interests are no longer part of the Trump Doctrine. Find one thing he has done that helps the US? Our president makes some cash, while the rest of us get Khashoggi’d. The usual. One of the greatest threats to mankind is nuclear war, so what does Trump do? He bails on the Intermediate Nuclear Forces Agreement with Russia. If a terrorist group gets their hands on ever smaller nuclear device, the blame will likely land squarely with Trump and his republican cohorts. How can any group be pushing nukes in 2019? What the hell are they thinking? Nothing good can come from an increase in nuclear bombs, or the resulting nuclear waste. Bury it all, along with the GOP, deep in Cheyenne Mountain, or I would prefer handling this Poe-style, while sipping an Amontillado.

Under Democratic leadership America is arguably a force for good, but only because under Democratic leadership America is *cough* arguably a force for good. I know these are hard concepts for our hard-headed friends on the right, because for them it’s all about perpetuation of the industrial military complex, nothing more. Under Trump we will reach a tipping point, if we haven’t already, at which time our mix bag status falls into the realm of the Not-so Great Satan.

And I’m sick of hearing how increasing polarization was Putin’s scheme to destroy us from within. One entire political party is compromised to Russia, not to mention cognitively. I don’t need Moscow to despise republicans, hell, just add 2 terms of Dubya, 1 term of Drumpf and one cup of Watergate and puff. Yeah, that’s the sound our country just made, puff.

[The Up In Smoke joke detained by LAPD for questioning.]