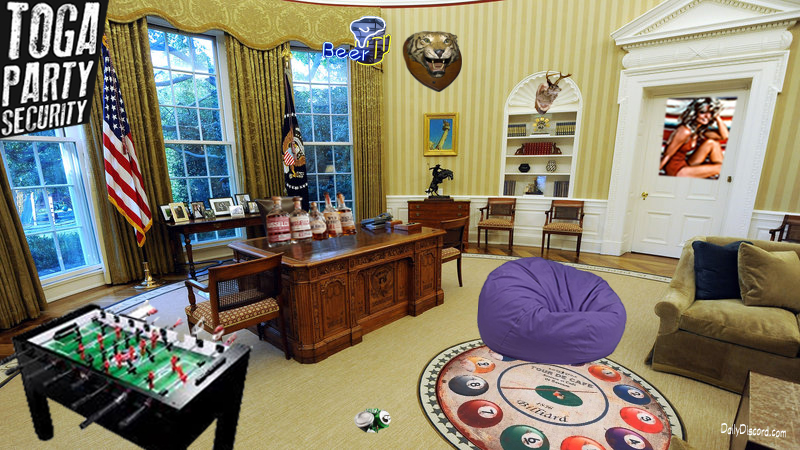 Tweet Tower—Eric Trump and Don Junior wanted to surprise their father this week so, as the president approved the spring dessert menu at Camp Donald, the Brothers Dim set to work ‘improving’ their father’s office. The Secret Service allegedly participated in the effort and pictures of everyone using the water-bong prompted Vladimir Putin to call the Oval Office to warn the boys that if they didn’t start acting their age he’d forward the photos to the president.

Eric Trump said, “Dad isn’t having much fun lately. Obstructing justice, collusion, and money laundering is taking all of his time. I want him to have a little more fun at work, before …you know.”

Trump Jr. added, “Yeah, he’s been a real grouch. With all these investigations sometimes we’re left to try to hold the Manafort …uh, the man cave a-fort. Uh, can I leave?”

Vice President Mike Pence said, “This stunt is beneath the dignity of the office of president and, speaking of which, there’s someone squatting beneath the foosball table!”

President Trump remains unaware of the recent redecorating efforts and will likely remain in the dark until Sean Hannity’s team comes up with a positive spin, or Mr. Putin makes good on his threat.