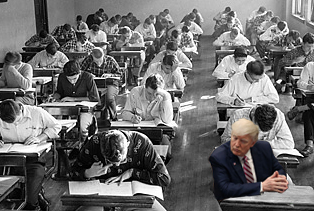 Queens, NY—Steve “Stevie” Miles is concerned his past relationship as a classmate of Donald Trump’s could lead to legal peril. Miles told the Discord today, “A lot of people who’ve associated with Donnie Dingleberry over the years are being dragged into court. Yeah, that’s his nickname. What I do know is that he looked at my paper a lot during exams. I told Mrs. Magaluso once, but there was some type of coverup involved. You can see in the picture, I noticed he’s trying to cheat so I’m giving him the finger. When Donnie did get in trouble, he either paid off someone to take the fall, or he blamed The Deep District. I took the fall once. I didn’t really give Jimmy Phillips a swirlie, but for twenty bucks back then? Shit. That was the most lucrative detention stint ever. Who do you think invented the swirlie? Yep, good old Donnie Dingleberry. He was like Nelson from the Simpsons …well, if Nelson sustained a serious head injury.”

President Trump responded today to allegations that he cheated on tests in grade school. “I don’t know Stevie Skidmarks, but he seems like a nice enough kid. If a picture exists of the two of us together, it’s probably because there are pictures taken every year with all the kids from each class. They are called classroom photos. I participated in them every year in school, except one, when Mrs. Crabtree wouldn’t let me stand front and center of the class. I got her fired for that.”

Steve Miles claims to have tried to work with the House Intelligence Committee on Trump’s adolescent rap sheet. “I told old Pencil Neck Schiff that Trump colluded with Russel, a real asshole, and he bullied just about everyone smaller than him. Schiff told me the algebragations were decades beyond the statute of intimidations, or somthin’.”