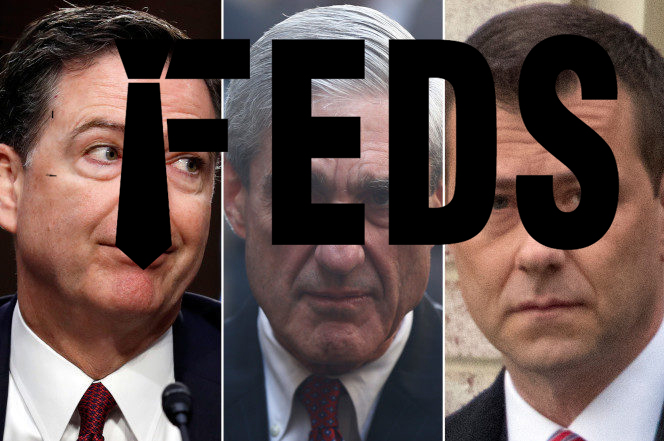 Fine, political bias from our intelligence community probably started earlier than that with John Brennan and James Clapper (under the direction of then President Obama). I have already cited many irregularities on Comey’s part, but let’s stay focused like a laser beam on Comey’s misinterpretation of the law regarding intent: “Although we did not find clear evidence that Secretary Clinton or her colleagues INTENDED to violate laws governing the handling of classified information, there is evidence that they were EXTREMELY CARELESS in their handling of very sensitive highly classified information.” Nowhere in 18 U.S.C 793 (f) of the Espionage Act which governs “grossly negligent” handling of classified information does it state that a defendant must have intended to break the law in order to be charge or found guilty.

In the language of the statute, no intent is required: “Whoever, being entrusted with or having lawful possession or control of any document relating to national defense: (1) through negligence permits the same to be removed from its proper place of custody” has committed a felony. The word “willingly” was deliberately omitted by Congress when it revised the Espionage Act. Section (f) was purposefully added to provide a lesser alternative to willful conduct (i.e. grossly negligent behavior).

The legal standard is not whether Clinton intended to violate the law (as Comey claimed), but rather whether her action was intentional. Peter Strzok changed the words of Comey’s original description of Clinton’s actions as “grossly negligent” to “extremely careless.” Although the meaning of these phrases are legally identical, the official wording of the law is “gross negligence,” yet Zano argues that Strzok’s action only has the “appearance of bias.” Well, Zano’s argument has the “appearance of stupidity.”

It was also unusual for Comey to state, “no reasonable prosecutor would bring such a case.” It is not the FBI’s job to recommend for prosecution. Early in his statement, Comey asserted facts which would meet any standard of probable cause that crimes appeared to have been committed by Clinton, thus he was duty-bound to make a criminal referral for prosecution. The FBI simply investigates and then turns the case over to the Justice Department. He stepped beyond his authority to exonerate Ms. Clinton.

I am not alone in voicing my opinion that Comey’s conclusion to the Clinton email investigation was wrong. Two weeks after Rob Rosenstein was appointed FBI director, he recommended to President Trump that Comey be fired. “I cannot defend the Director’s handling of the conclusion of the investigation of Secretary Clinton’s emails, and I do not understand his refusal to accept the nearly universal judgment that he was mistaken. My perspective on these issues is based on the opinions of former Attorney Generals and Deputy Attorney Generals from different eras and both political parties.”

It is unheard of in criminal cases for immunity to be granted to witnesses without them first having to deliver evidence that incriminates someone else, and precipitates criminal charges. Five immunity agreements were granted by the FBI to Clinton’s State Department aides and IT experts, yet no one was prosecuted. Strzok interviewed Clinton, and two of her top aides–Huma Abedin and Cheryl Mills, who both claimed they never knew anything about their boss’ private server until she left office–even though emails show them discussing her unauthorized computer system. Yet they were never charged for making materially false statements to the FBI. Compare this with Strzok’s handling of Flynn. Yep, I’m sure you will agree that this does have the “appearance of bias.” The FBI treated Mills and Samuelson as suspects, accomplices, witnesses, and defense lawyers all at the same time and in the same case. Mills and Samuelson were actually permitted to sit in on the FBI (Strzok) interview with Clinton as her lawyers. It is unheard of for prosecutors to permit this because it gives the witnesses a chance to conform their testimony in such a way as to support the subject of the investigation.

Under the Attorney General’s Guidelines for Domestic FBI Operations, it state that the agency does not have the authority to open an investigation into activity that does not or will not constitute a crime. There must be “an articulable factual basis for the investigation” that indicates that a crime has or will take place. With Trump Russia “collusion” there were no crimes or facts from any credible sources. And still after a year and a half, the only evidence of collusion is found in the DNC and Hillary campaign when they paid Fushion GPS to collude with Russians to gather dirt on Donald Trump. That’s no big deal, since “collusion” is not a crime; but when you use unverified opposition research to….(to be continued).

If I’ve stated incorrect, please show me. I’ve searched and searched, and these are the relevant facts of what is happening right now, Zano. The politicizing the FBI and Justice Department are distractions from the Trump-Russia nonsense. You have it backwards. The Russia probe is a distraction from FBI and DOJ political bias.