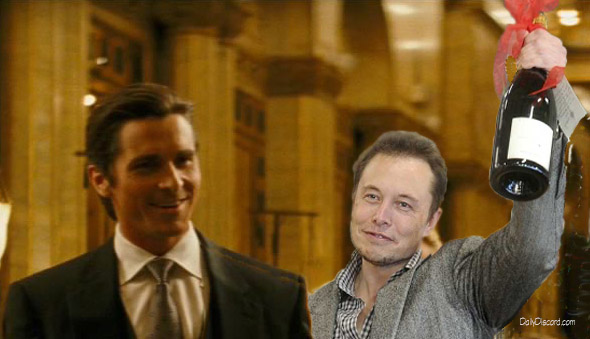 Gotham—After Elon Musk announced his desire to take Tesla private, many are wondering if he really has the 10-billion in petty cash needed to privatize his company. Musk’s recent celebrity sighting with billionaire Bruce Wayne, CEO of Wayne Enterprises, has stoked rumors Musk has already lit the ‘Bruce Signal’. President Trump is threatening to squash any merger between the two giants based solely on all the Discord’s recent Trump-Gotham crime-boss jokes, which the president called “Fake fake News.” CEO of the Daily Discord, Pierce Winslow responded, “Fake fake news is real fake news, or my name isn’t Pierce Winslow. And it isn’t.”

Such a merger has profound implications for both Bruce Wayne’s company and his extracurricular nocturnal activities (ENAs). Many are already questioning the barriers to an electric powered bat mobile when the caped crusader is out crime fighting. There are only 77 supercharger stations within a 100 miles of the Bat Cave. Is this the edge the Joker and the Penguin have been waiting for? Will Tesla charger stations be targeted by super villains? Are areas devoid of charger stations more vulnerable to attack in general? Does the Justice League really need another rich applied-science guy?

Wayne Enterprises also owns Jolt Cola and Bruce Wayne has apparently pitched the idea of the production of a Jolt-powered Tesla model. Tesla has not officially responded to this suggestion, but there is room for a quid pro quo as Musk let his intentions known that he wished to join the Justice League. And we all know Batman is in charge of the hiring. The Musk Rat was unavailable for comment. Muskman?

In related news, Musk looks terrible in spandex so most of the Comicon community has ruled out the pair becoming the next dynamic duo. Batman and Elon Forever?