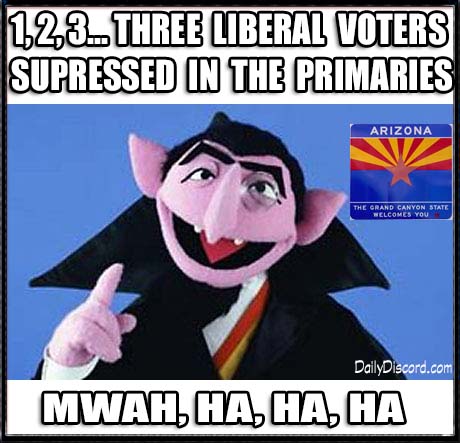 Yes, The Discord guy didn’t get to vote in the AZ Primaries. Voting was a shit show in my state last week, even by normal Arizona “standards”. Here was the excuse:

When you changed your address, maybe you failed to fill out the voter demographic part properly.

Uh, I haven’t moved, unless you’re talking about moving from the sofa to the fridge, which is still bullshit because I have people for that. I registered as a Dem in 2008 to vote for Obama, so those claiming user-error are mistaken. They always pull this crap. This is the GOP’s Modus Operandi, who I refuse to denigrate in this post. For our Republican friends, “Modus Operandi” means “standard operating procedure.” Republicans are Constitutionalists in the same way that ISIS is a team of archeologists. Rapers of the Lost Ark? Raiders of the Lost AARP? No, seriously, this is a question… I’m trying to slam both ISIS and Republicans in the same joke. ISIS Shrugged? There you go, Zano. I knew you could do it. Let the suppression begin!

Here’s my anecdotal voting experience. Of the approximately 15 people present in the polling station, all the Northern Arizona University students (n = 6) were asked for a second form of identification. None of their IDs seemed to be acceptable (gun permits = good, but student IDs = bad). So everyone who was listed Dem was ultimately herded toward the Table of Shame, which is located just south of the Gorge of Eternal Voting Peril. I joined them because I was still registered as an independent. This is true, by the way…were this 2008. Hey, maybe Republicans have invented a time machine! Kidding, Republicans don’t believe in science. Theory of Irrelativity? Quantum Creeps?

I don’t remember Arizona being a national laughing stock before I moved here. Coincidence? On that note:

I went to two Sanders rallies and never got to vote in the primaries, so I think you owe me some compensation for my time. Since I’m such a big Bernie fan, I want you to take the 79 dollars I’m suing you for and divvy those funds equally between the residents of Arizona.

P.S. I hope a calculator is in the new budget.

Not to mention, I have never voted in the same place twice in Flagstaff. Very Heraclitus of you, Arizona, very Heraclitus. Kidding…philosophy is also all Greek to Republicans. I think therefore I is? Last Tuesday I had to trudge clear across town. My polling station moves around more than Oklahoma after a fracking party. I had to battle orcs, Trumpites, and those Vote Wraiths. Maybe I’m being a bit melodramatic, but parking behind the library is a bit of a bitch around lunch time.

The bigger shit show was apparently Maricopa County, where 200 polling stations were reduced to 60 through the power of savings. Honey, I shrunk  your rights. I have friends who said they waited in line for many hours. Benghazi! Sorry, it’s a compulsion.

Who’s fault was the AZ voting debacle? I admit this is a Democratic primary, so do they bear some responsibility? I doubt it. Maricopa County Recorder Helen Purcell is taking the rap, but mostly for the shortage of polling stations. There’s very little coverage on what happened to me, although this did apparently happen to thousands of other people. A lack of polling stations can be the result of stupidity, changing people’s party seems a little more than just a “glitch” to me. The Voting Rights Act is still warm and you people are already screwing this stuff up? Funny how four years ago this didn’t happen. I love how Republicans are such state rights people, when we all know local corruption is even greater than on the federal level. Just think of it this way, whatever Republicans are championing is probably a terrible idea….well, if history is any judge. Speaking of judges, thanks Scalia! Still screwing me from beyond the grave. Well done, sir.

I am not kidding about what happened to me, minus the orcs and the Vote Wraiths. I didn’t get to vote. I know many of my Republican friends believe they’re constitutional scholars, but today they are anything but. In the 21st century a constitutional Republicans is an oxymoron. Similarly, using oxymoron to describe Republicans is kind of a double entendre. According to them our Constituion is all about voter supression, torture, and unnecessary foreign entanglements arrived at through deception. Yay, Constitutional scholars! Let’s not be too hard on our Republican friends, they’re just working with their God-given gifts…er, that God apparenly forgot to give them.