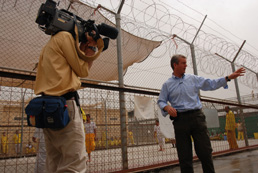 Sierra Vista, AZ—The Head of Homeland Incarceration, Sherriff Joe Aripio, is pleased to announce the opening of a Delaware-sized prison in the heart of the U.S. Sonaran desert. President Trump told the press today, “This is huge. No, really, it’s a big place. By allowing the free market to work we are shifting the management of the majority of our National Camps to the best internment people. The best. This will help out the tax payer bigly, because I got Mexicans and liberals to build the thing! Not only can we all save some money on this deal, we can keep minorities in a safe place. Not forever. We just don’t know which side people are on anymore, because, let’s face it, I’ve pissed off everybody—even that Russian asshole who got me elected. We just want to keep minorities safe and sound while we figure it all out.” When asked to elaborate on “figuring it all out” Trump said, “Well, whether or not they’re really white enough. Deep down.”

President Trump told reporters, “I built this monstrosity right along the border so we saved money on that part of the wall. That’s smart. That’s bigly smart. You can come in through the front door and, after we’re done with you, welcome to Mexico. Garbage in, garbage out.” When Trump was asked how he plans to fill this ginormous facility, he said, “It’s not just about illegals and minorities anymore. A lot of people don’t like my Constitutional Addendaments. They don’t like any of ’em, so a lot of liberals are starting to hate America and even more concerning, they hate me. And I can’t have that. Not on my watch, so we watch. If they’re doing unAmerican things, like driving a Prius, or putting up a solar panel, or eating at a Vegan joint, we pick them up for questioning. You’d be surprised how many people who shop at Whole Foods are political dissidents. And a lot of people still haven’t scraped off their Bernie bumper stickers, which is probable cause now, because they’re probably assholes. I just want to keep them safe until we can determine whether they are really republican enough. Deep down.”

In related news: Trump is denying the use of Political Conversion Therapy techniques since banned by the Geneva Conventions. He is also refusing to discuss the incident that led to the Red Cross’s mandatory evacuation from nearby Trumpschwitz.