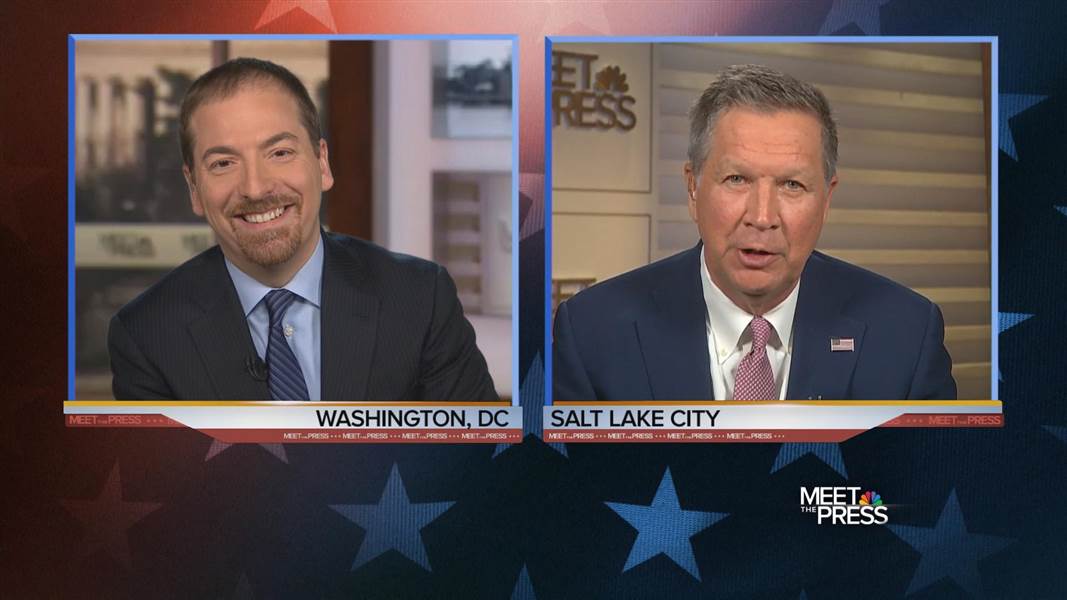 Ohio Governor John Kasich did a great job on Meet The Press last Sunday, but the host, Chuck Todd, not so much. He pulled a CNN. Don’t let someone come onto your show, sir, and suggest that liberals are the ones who need to soul search. We are the soul people, at least comparatively. If this is a war of ideas then building a 2K long wall is not an idea so much as a future construction-industry scandal. Republicans have elected two of the most incompetent presidents in our nation’s history—in the last five minutes. Don’t let them off the hook, ever! Granted, Kasich said a few sane things during his Sunday morning appearance, like let’s fix Obamacare not gut it, but how many republicans resonate with sensible? Kasich hung on until the end of the primaries, because he wagered his party would eventually break from stupid and crazy. I would never have taken that bet, in fact, it’s why I blog. From a political standpoint libs admittedly have bupkis to show for their recent efforts, but from an ideological, intelligentsia, and consciousness standpoint, the GOP can kindly go Bannon itself. Yes, at the risk of increased international sanctions The Daily Discord has successfully weaponized the Mooch’s recent auto-fellatio comments. Screwphemism? Satiric Missiles? Fine, I’ll work on that one.

What the hell are conservatives complaining about?

You. Have. A. Supermajority.

Pretend this country is the Titanic and just kick back and enjoy it while it lists. Ironically we are taking on a lot of water lately and I can hear the band striking up Nearer To Trump Than Me. To the lifeboats, everyone! Wait, I’m being told republicans cut funding for lifeboats. Crap.

The rightwing needs to be called out each and every time …they speak. Lies and delusions do not a good party platform make. Who knew? I realize at this point it’s not going to help the Incurables, but we need to take steps to protect the next generation from this idiocracy. The hour is getting late.

Rassmussen poll: majority of Americans with IQ above turnip ready to drink Drano.

Liberal commentators tend to fawn over well-spoken republicans, much like Zira’s interest in Taylor in the Planet of the Apes. Look, one of them talks! This is no excuse, Chuck. You were schooled by a conservative on your home turf. Don’t let them feign competence. This is precisely why the Mike Pences of the world represent a far greater longterm danger. Folks like Kasich and Pence represent a more potable form of the same shit sandwich. We need to recognize the inherent danger of the slightly more polished conservative. Could you imagine a world wherein Trump’s legislation actually passes? Yeah, that’s called a Mike Penceidency. Sorry. This is why I am holding out for annulment, not an impeachment, which represents a hail Mary for our country’s relevance.

I too am impressed when a republican can walk and chew gum, but your party is on track to break this super power like a twig. Physician heal thyself! Wait, I’m being told that’s no long covered.

The only reason Chuck Todd allowed Kasich’s, ‘get your shit together, liberals’ rant, was that it segued nicely into his own similarly themed segment. Regardless of the merits of Chuck’s next segment, you still can’t let such an outrageous statement go unchallenged from a republican (who all remain challenged). Remember, the rest of the slightly savvy rightwingers are all in hiding. Witless protection program?

Progressive have a soul that needs mending, republican need to acquire one. There’s a marked difference. Oh, and you probably should have read the fine print on that document you signed to get Ass-Clown elected. E pluribus uranium?

There’s already a wave of headlines predicting the demise of the republican party. Will Trump destroy the GOP? Is this end of conservatism? My desire for a full GOP collapse is based on wishful thinking. Sure, demographically, their long term prospects are poor, but we will likely all be dead by then, or worse. Sorry. Republicans have reached a level of incompetence that only begets more incompetence. What Trump may do is pave the way for a seemingly less insane republican presidency, and there’s no such thing. That administration will likely get more done, which will ravage our long term survival prospects. Oh, we moved away from a sociopathic man-child, so please reward us with another political caliphate.

The media remains complicit in this. They seem afraid to challenge Fox News or fully alienate republican viewers. Sure, in private they think they’re fools, but they will allow equal unfettered airtime. Long ago someone decided to give good ideas and really dumb ones equal time, with equal pundits. CNN was the worst offender. There is such a thing as basic facts, ones we should be able to all agree on (at least there used to be). As a direct result of the media’s 21st century missteps nearly a third of our population remains locked in this deaf spiral.

“The Trumps you feel are the sound of billions of tax payer dollars being diverted for a giant wall. Also, we’re heading right for a nuclear confrontation with North Korea and can’t seem to change course. We’re also out of coffee.”