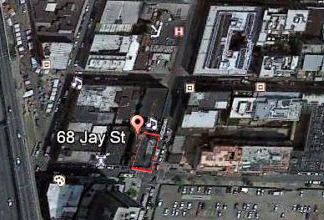 Brooklyn, NY—Thanks to advancements in Google Earth imagery, researchers examining the ancient New York bar scene have discovered a previously unknown Brooklyn watering hole. The foundation of this older establishment is much larger than the current business, Jake’s Shithole & Grub, located at the same address. Anthropubologists believe this earlier structure was built by post-McSorelian nomadic brewers many decades ago. Dr. Sterling Hogbein, of the Hogbein Institute and Grill, told the Discord today, “For a pub archeologist, this is like finding the Holy Ale or the Beer of Destiny. This could help fill in entire gaps in the ancient pubcrawlic record. We may find clues about the period between rock and grunge, or post-disco and hip-hop, or even between Saturday afternoon and that incident I had at Chumley’s at last call. This amazing place, revealed by Google Earth, looked to be a hybrid of a pub and a club. This ‘plub’, as it were, housed both a giant dance floor as well as several regulation pool tables. And this is just the tip of the ice beer.”

Researchers aren’t exactly sure when the structure was built, or even if they enforced weekend cover charges. Interviews with the nearby homeless population have netted little information regarding the bar’s hours of operation or prominent drink specials. Dr. Hogbein said, “We are harkening back to pre-cell phone era of imbibing and merriment, so there’s no endless social media forums to peruse, chock-full of sloshed Facebook patrons. We know next to nothing about these times, at least comparatively. Perhaps the beer was so free-flowing that the entire neighborhood blacked out. What bands were playing there? What were the jukebox favorites, the Bee Gees, Toto,  Nirvana, Tito Puete? A journey to the basement only revealed the remnants of a Journey cassette and a bottle of Blatz. Perhaps some mysteries should remain just that.”