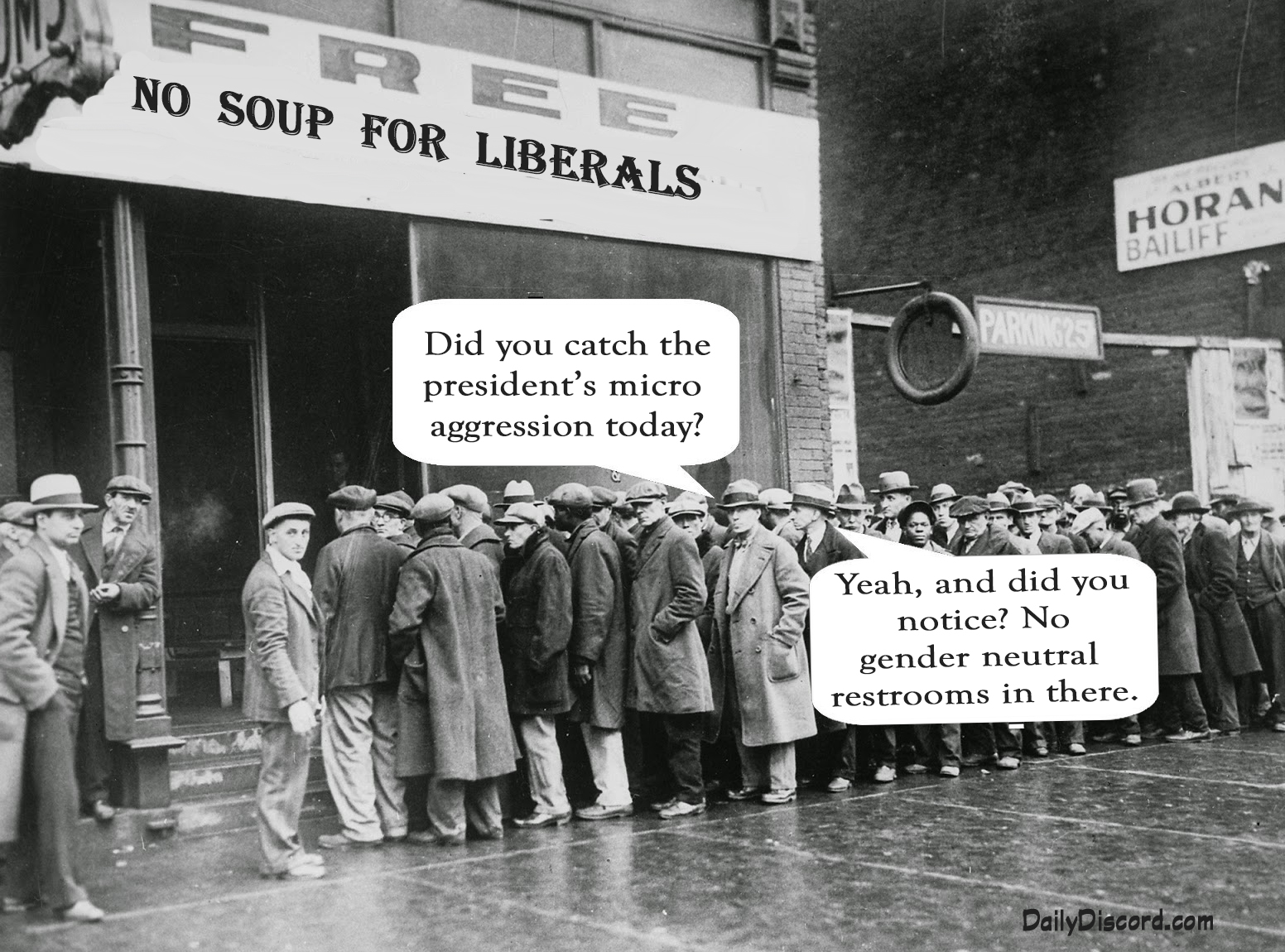 Dear America, please don’t lure me back to those days when I despised both sides of the political aisle. It should be painfully obvious in 2019 that we have a fairly typical party and a wholly deplorable one. Despite this fact, the Eye of Zano is turning once again toward the Mountains of Blandness. The cognitive dissonance is becoming more pronounced on the left, as predicted …but, hey, at least they can pronounce something. It’s hard to remain optimistic when half of our Democratic hopefuls have no grasp of today’s issues and the other half are too old to articulate them. Congressional hearings are equally as disturbing when Republicans remain unsure of the main premise outside of last night’s Hannity segment, and liberals won’t cede their time to the prosecutorial ringers in the room because of their egos. Soundbite over country?

A key hallmark of the liberal level of consciousnesses is an “I’m OK, you’re OK” theme of inclusiveness that respects all perspectives and viewpoints. The dissonance enters today when any inappropriate human contact, no matter how slight, becomes assault. In fact, the allegations themselves are career-enders.

(Thanks fair woman, who felt the hip/hand placement was 5 cm south of corn dog etiquette.)

So everyone’s viewpoint is important, unless there’s some hurtful micro-syllable of aggression hidden somewhere. Anything that doesn’t adhere to the strict liberal manifesto, whether last week or last century, needs to be stricken from history. All old movies, books, even conversations are unacceptable. Anyone born before a certain date is a racist, societal and cultural norms of the time be damned. Liberals are raging against everything, yet in the end nothing. They’re a monkey wielding a politically correct gun.

Is diversity even an admirable trait anymore? A political party with a big tent and a wide array of views should represent a strength, but it’s been anything but for the Dems. Diversity has only acted to strangle progressivism. Thunberg’s approach is the right one: painful, honest and straight out of the mouth of babes. If you choose to engage a Republican in debate, complexity is a crutch. If liberals continue to go in a hundred directions, forward or otherwise, they will lose every time to the right’s ability to move directly backwards, in unison, like Borg-lemmings with HD rear cams.

The super power within modern conservatism is its ability to speak with one voice: one unanimous, populist, fascist-sympathizing, anti-democratic, hateful, greedy, and mindless voice. During any given Trump rally only a few main themes pop up again and again via thousands of grammar deficient hate signage. On the flip side, should liberals ever Occupy the National Mall again—and it’s already time, folks—such gatherings will be replete with hundreds of semi-related grievances.

In the face of this level of tyranny, how come the resistance is so disorganized and tangential? Everyone is having reservations about the Dems candidate pool, but once again you heard it here first: If This Is The Best Liberals Can Muster, I’m Writing In Ralph Nader.

“The Liberals are simply not up to the task of slaying this Donald Dragon. It’s becoming increasingly apparent they don’t have the required smarts, charisma, historical knowledge, or testicular fortitude to get the job done. If the Dems are Rogue Squadron, it’s like we left the hangar doors closed with the X-wing engines running for too long.”

Yeah …when I think about you I quote myself. I watched part of the first debate and shut it off in disgust. A bunch of know nothing, pie in the sky economic absurdities, brought to you by a slew of semi-serious candidates.

I’m not looking to intentionally offend liberals with this next bit, but some of their individual causes seem trivial when juxtaposed to mankind’s pending demise:

To be clear, I’m not anti-metrosexual manatee-friendly safe shits, and some of these related issues are very important for some people. So do we address such concerns, at least of the non-fictional variety? Yes. But do we prioritize such issues when the quality of the water pumped into said facilities is starting to make Flint Michigan look like the Fountain of Youth? We all drink the water, and some of us drink the Kool-Aid. Remember Maslow? Were this a functional society perhaps such crapper crusaders would be paramount, but today it’s more about the water than the water closet; it’s about our elimination as a species, not our elimination as a species.

[Revelations over defecations Chapter Poo joke flushed by the editor.]

Certain liberal issues help the right maintain power, period. Madam Speaker’s Gabbard attacks aren’t helping. We need Michelle to run and we need Hillary to put a sock in it. We also still have a large swath of Bernie or Busters, who have gleaned nothing from their 2016 performance. We also have a slew of liberal splinter groups, ready to rail against anyone for anything that disturbs their delicate sensibilities. It’s hard to hold a revolution from a safe space, folks, and we need to mobilize now before the dollar is sidelined for good. Alienating moderate Democrats in the name of shortsighted millennial whining is not helpful.

Andrew Sullivan was attacked recently on Real Time for merely mentioning a statistic regarding the lack of fathers in the black community, and Bill Maher is always attacked for citing rather disturbing polls from Middle eastern countries. Liberals have their own cognitive dissonance, but under no circumstances should we shun data …that shit must be reserved for the Grand Old Party.

Meanwhile, we are being screwed. Privacy is gone and corporate rights are growing while our individual rights are disappearing. Latest attack from Trump’s goons on consumer rights, here. Maher’s “Scamnation,” which I pointed out on this site long ago, is in full swing. We lost the war without firing …or even drinking a shot,

Aren’t you being a little hard on the home team, Zano?

Hardly, it’s always been the terminally wrong against the waffly indifferent. Need a new example?

Only one congressman (D) censured president Bush for lying America into the Iraq War.

These are both sides of the same suckage, folks. Dems are correct, but it’s not enough. I was very proud of Russ Feingold’s censure stance back in the day, and said so at the time. But we don’t elect very smart people. America is starting to make the last days of Rome look like Walden Two. Sure, Republican insight remains non-existent, but liberal smarts are growing rarer, like the steak they won’t eat.

[Texas Roadkill joke scraped off the pavement and buried in a nearby culvert].

Liberals must police the Antifa-type elements baked into the liberal cake. We must call out all those who hold each individual to some ridiculous standard. Let’s leave the Civil War statues alone right now and concentrate on the Trump ones. The American way of life is not in jeopardy; Jeopardy is over and Wheel of Misfortune is already starting. “Tell them what they’ve done, Vanna.”

We had huge marches at the onset of Trump. Now that he’s ending shit, as advertised, we can’t muster a Facebook Meetup group? WTF? We need a simple unified approach in the National Mall. I have warned for decades now how Republicans are getting less insightful, yet manage to keep “winning” through targeted bullshit. It’s time to take notice and learn a thing or two from our dimwitted, yet wildly successful adversaries. They tend to vote on election day, and they do it for court appointments even when they don’t like their man (yeah, it’s a man). So, yes, these imbeciles are smarter than us. Strong work.

My prediction is R will stay on the same page—of Mein Kempf—and liberals will continue to tear themselves apart over their ethnic blind cleansing and some candidates insensitive eighth grade Halloween costume. Republicans don’t care if their candidates are rapists, as long as they fill the vacancy with card carrying members of their crime syndicate. If we can’t mount a true, coordinated resistance… kidding. A certain Bill Paxton quote comes to mind.

Aaaaand as I go to post, here’s today’s The Drudge headline: Majority of Americans want to re-write First Amendment to Stop Hate Speech. Brought to you by: Liberals for the Re-election of Donald Trump. Oh, here’s two more Drudge today: 7 in 10 say US on Edge of Civil War, and Living in Parallel Universes …you know, late eighteenth century Zano.

Game face, snowflakes. We should at least try to go out with a mutually consensual, safe space bang.