The incoming administration will thrust our nation into one of the darker corners of The TwiRight Zone. The historical two punch resembles bookends: on one side we have 9/11, or more accurately our piss poor reaction to it, and on the other we have President Donald J. Trump. This election hit me harder than 9/11 as The Donald personifies our nation’s ideological, educational and developmental deficiencies. The Underachievables? Post 9/11, we watched W. gut our foreign policy safeguards, suspend habeas corpus, torture some folks, and then created the Orwellianesque NSA and drone program we enjoy today. Thoughtful discretion ruled for the last eight years, but now we are handing these expanded powers to a man child with an even more expanded ego. The Donald aims to finish what Incurious George started, so check please! And balances please! Kidding, those will become harder to find than a water filter in Flint, Michigan under Trump’s new EPA pick. David Frum and others believe our Constitutional firewalls will hold. They are wrong. Trump will rule like a strong man, well, a strong man with a brain-eating bacteria. Trumptofuccus? Somewhere President Samuel Adams is rolling over in his brewery.

The conservative ideology, which at its best represents a strange amalgam of fundamentalism and entrepreneurialism, is degrading further into its more basal components, namely religiosity and tribalism. To watch this unraveled, unconnected, unhinged group attempt to orchestrate the free world will be Netflix-binge-watching Gilmore Girls excruciating. Speaking of amalgam:

Of course, Republicans felt the same way under Obama. Uh, yeah, steady leadership and improving economic indicators can bring you to a pretty dark place—called prosperity. But let’s give The Donald some Trump U. credit: only a true magician could take this empty, pathetic ideology and bring it down a notch. You people should no longer be holding public office, let alone wielding a super majority. In fact, the GOP should come with a warning label. Wait, I’m being told Congress is doing away with warning labels. Politically modified law substance? Maybe they are more diabolical than ignorant? It’s a combo package, for sure, which kind of Republican are you?

We will see two competing delusional perspectives duking it out for the next four years: the Republican establishment v Tweet Tower. Which batshit ideology will prevail is anyone’s guess, although my money is on Trump. If you’ve read some Zano, I have always felt our misinformed Republican friends will damage our union far more than all the radicals in the ionosphere. Hyperbole? What’s more dangerous, a handful of embedded ISIS members, or having 63-million citizens willing to hand our nuclear codes over to an imbecile? Got math? Even how we handle ISIS is crucial. As for Muslim extremism in general, Republicans will exacerbate things, increase radical recruitment, and weaken our ability to fight them economically (see: history).

How did we already lose, Zano? The midterms are in 2 years, so Chillax.

It’s over. As long as Republicans are anywhere in the political mix, we all lose. North Carolina and Maine are two current examples that show our plight. It’s really more of a Dickenesque Tale of Two Shitties.

North Carolina:
Governor  (D) + Congress (R) = Ø (incoming Governor not even allowed to pick his own cabinet).

Let’s magnify all this stupidity to a super majority level and that’s what we are facing for the next two to four years. They were rewarded for being mind-numblingly incompetent. A better life through rampant obstructionism. I hope Dems learn that trick.  It certainly seems unlikely. I don’t want to jump on the bandwagon. In fact, I want to jam a stick in the spokes and strip the bandwagon for parts.

On a national level, Republicans have permanently gerrymandered themselves into the House. We will never be rid of them. Not in time. The damage Trump will do will take decades to undo, best case scenario, and we don’t have that long to address our real problems. I have been saying all along it’s a race between the GOP’s demise or the planet’s. The race is over. You say you want a revolution? The coupe already happened. Sorry folks, but apparently election day fell on 420.

Will the Republicans ever gain insight, Zano?

Hell no! More accurately, not in time. In all fairness, we’ve never had enough time to explain things to them. They have been Drudged, Brietbarted and Foxified into some nether political reality (NPR). What’s worse is how all of this is happening amidst a critical environmental juncture. History will damn them, for sure, but why wait? Why not damn them now? 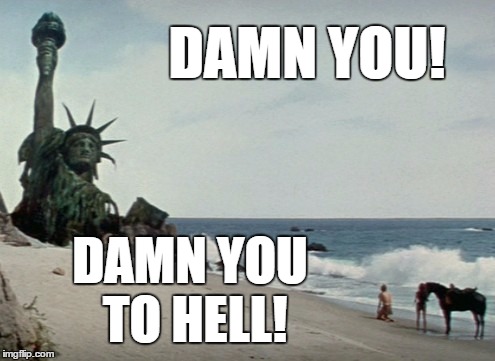 What do we do in the mean time, Zano, besides horde food?

We can’t stand by idlly and watch them gut the last of our resources and environmental safeguards. We must fight the systematic attacks on minorities and the oppression of Muslims. We must speak out against anything Trump does to circumvent the Constitution, damage checks & balances, or hasten a clash of civilizations. These are a few of their favorite things.

We can’t make destroying the world easy for them, so anything that we can bust up politically, we bust up. Use their obstructionism tactics against them whenever possible.

Let’s constantly remind Republicans how, they seem wholly incapable of both legislating and chewing gum. Bubble Dum? Make no mistake, the rate of disparity of competence between our political parties will only increase, perhaps even to a point when people will actually take notice. It’s a tight race between their growing ignorance and our failing public education. There are a few sane Republicans out there, but they are becoming ISIS-bodhisattva rare. Shambhala Akbar?

I’m afraid it will have to get really bad before a Republican politician will break rank. I’m not talking about squabbling over dumb shit, like the best way to take away people’s insurance, I mean adopting responsible policies. I’m sure there will be huge pressures to just rearrange the deck chairs as we approach the next iceberg. The S.S. Tweetanic? There are some signs of Republican resistance to Trump, but I’m afraid our new president is going to be like dealing with the Borg …well, the Borg with a traumatic brain injury. 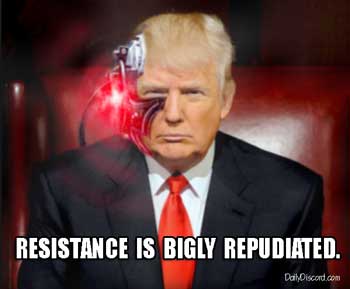 Retraction: I am being told the giant ants were created by one of the first A-Bomb tests in White Sands, New Mexico, so let’s change that example to the pending alien invasion.

Retraction 2: I am being told they Galacticans are approaching because they intercepted our invitation from Voyager, so let’s just skip this example thing all together. Full invasion story here.