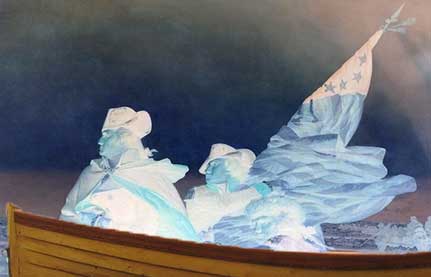 Plymouth, MA—Much to the relief of our Founding Fathers, the ghost of King George III has graciously accepted their spirits back into the bosom of mother England. The group hopes to reach the Cardiff shipyards before the inauguration of Donald J. Trump on January 19th. The group’s initial request for soul citizenship in 2004 was denied, but now the ghost of King George has had a change of heart. The King released a statement today. “Having those sniveling upstarts come crawling back kind of eases the blow of the whole Brexit thing. We’re going to make them haunt the Duchess of York, and that British wanker in charge of the Deepwater Horizon.”
The ghost of John Adams told The Discord, “We thought about buggering off after Bush junior got re-elected, but old Georgy wasn’t having any of it. The events of November 8th marked another call to action. The GOP pretty much encapsulates everything we despised and warned against. Thankfully this last request was granted. Oh, and we’re taking Bowie with us. He’s not a founding father, he just wanted a lift.”
A key member of the founding fathers is curiously absent from this spirited colonial egress: “We decided to leave Alexander Hamilton stranded in the U.S. for all eternity,” explains Thomas Jefferson. “After all, he came up with the idea for the electoral college, which is a bit of a sore subject amongst the F.F.s at the moment. I told him that was a stupid idea at the time, so it servers the bastard him right.”