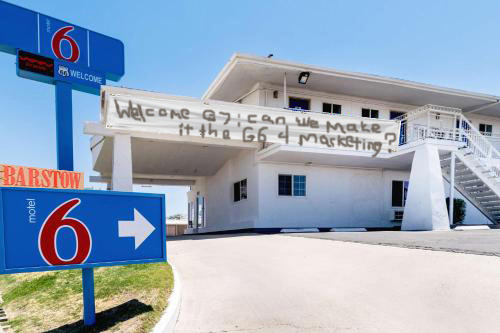 Tweet Tower—After mounting pressure from everyone everywhere, the president declared his Doral Miami resort would not be hosting next year’s G7 summit. In a presidential tweet The Donald declared the G7 would now be held in a seedy Motel 6 outside of Barstow, California. The White House released a statement that the town of Barstow has “plenty of land, numerous convenience stores, and is hailed as the Gateway To Bakersfield.” Senator Chuck Schumer (D-NY) claims, “The venue decision was also motivated by digging up dirt on the Bidens, because there’s so much of it already out there.”

The president fired back at critics today by tweeting, “What?! Good places not good, bad places no good?! Who am I, Goldi-friggin’-locks?!! I have to find something just right for you people? Don’t worry, we’re going to put all the world leaders in the best rooms at the Motel 6, with great views of the wrinkled brown mountains but just out of earshot of the pool that no one in their right mind would ever use.”

Minutes later Trump immediately deleted a post that said, “And there will be plenty of ICE machines available to deport their sorry asses back to their own shithole countries at the end of the week. But if Putin is finally invited I’m told I’ll have to upgrade #DamnPeeTape.”

[Retraction: we added the word ‘hailed’ in the WH statement to help them sound more sophisticated.]