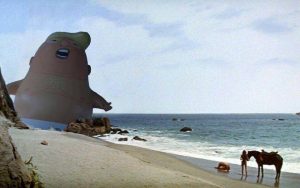 I wanted to go with Subdeplorable Homesick Blues for this one, but there were some copyright issues. Speaking of which, I did steal the above funny image (a first), but only because when I thought of the joke someone had already beaten me to it! Meanwhile, Dems have finally arrived at a comprise; they’ve agreed to impeach parts of the president’s mouth and penis. I understand the Pelosi dilemma, aka the political dangers of losing an impeachment hearing to a corrupt senate, but at the end of the day …um, it’s the end of the fucking day! Thankfully the number of overall congressmen who favor impeachment is climbing, one more today, because I for one would rather go down fighting blatant criminality than ignoring it. Hell, we could lose 2020 to this ass-clown either way, or, worse still, Trump won’t accept the election results. So when it comes to unconstitutional mischief, Lady Speaker, take a page from another Nancy and, “Just Say, No!” In the end, the Russia probe was an investigation that proved endless wrongdoing, yet arrived to a deafening silence. Its conclusions were wildly damning, so let us never speak of it again. Now we’re about to face the Horowitz report, a reactionary sickness spawned from the ashes of Mueller’s failings. The Republican-led probe will be more like a reverse ouroboros phoenix, i.e.it continually explodes while flying into its own asshole.

This new head inquisitor, General Michael Horowitz, has been hired to find procedural wrongdoing in the DOJ, but should we take the investigating the investigators seriously? We’d better, because anything this guy finds will come with a slew of ‘guilty as charged’ rulings.

What have we learned post-Mueller? Almost as much as my initial predictions:

From week one this spoof-news guy beats a two year multi-million dollar inFedstigation. So for bullshit like Benghazi you can net eight investigations that helped to throw an election, but for truly treasonous right-wing antics: move along, there’s nothing to impeach here.

The day the Mueller report was released, I called it “an unmitigated disaster, regardless of its implications”  (parazanophrased). It was clear, with a politicized DOJ, Trump had won the argument by lying louder than the truth. The real tragedy? Mueller was hyper focused on Russian interference and never seemed interested in a potentially compromised ass-clown. A Beast article lays out exactly how he botched the conspiracy conviction, and we all saw in real time how he screwed the obstruction pooch by trusting in a broken system.

I know, I know, there’s still a ‘Mueller road map’; these other court hearings farmed out to different states, blah blah blah, but I have little hope for justice in 2019. Our constitution is moot. Now it’s about selective enforcement, as the rule of law will only be applied to progressives. This Horowitz chapter will operate thusly: if she drowns, she’s innocent, but if she floats …a witch! …a witch!! Shit’s broken and, worse still, she turned me into a newt.*

The Horowitz report will be nothing more than a DOJ-sanctioned attack on Trump’s political enemies. We know what happened during the origins of the Russia probe. There was interference into our election, widespread and ongoing, and many of Trump’s people were implicated because they lied about their dealings with Russia …a lot. These lies were orchestrated—to the best a Trump administration can orchestrate anything—to stymie the investigation. In the end these widespread obstruction efforts worked and the president was never held accountable. Guilty as not charged. And then, to add insult to perjury, it ultimately spawned this new query into some potential procedural anomalies deep within the DOJ. The Horowitz Distort?

The origins of the Russia probe also involved not if a potential presidential candidate was compromised, but how badly, and did levels reach that of a national security concern. Mueller admitted Trump was compromised to Moscow, here, but had no interest in the matter (or per that Chait link):

“The Mueller report states that it was a criminal investigation, not a counterintelligence probe. If Moscow has leverage over a presidential candidate, that is not a crime.”

“As a head spook, domestic security threats don’t really interest me much. I only majored in foreign national security threats and minored in sociology. Domestic beers, though …mmmm, beer.”

—There’s something about Bob Mueller

An investigation into Russian interference wasn’t a counterintelligence probe? What the hell is wrong with this country? Post the battle of Hogwarts, constable Mueller would only cite Tom Riddle for several student housing violations. It’s true, Tom Riddle probably broke some of those, but, umm… I’ve been kicked out of the dorms too and, off hand, Voldemort’s actions seem much worse (at least in the last three books …well, if you exclude my Woolrich Hall incident).

Do you really think a Republican-led investigation into Hillary Clinton would have ended with, yeah, we know Putin had the goods on her, but I’m afraid that fact wasn’t really part of this inquiry. What is that? A one in a million chance? Republicans can’t frequent this political dimension, let alone stay in a given lane …Nathan, Lois, or otherwise, but they’re doing something right …well, if you consider destroying the planet something right.

The Horowitz investigation really can’t fail, because any irregularities real, perceived, or invented will be backed by an AG who is empowered by a president out for revenge #TweetingaDeadHorse. Any narrative can be crafted into the greatest affront to the ‘Murican way of life and they have nearly 40% of the population prepared to lap up every falsehood like Scooby after a bong hit. This is a recipe for disaster. And this is a recipe for hash brownies, which you’re all going to need post Trump:

This alternate GOP reality will continue to win when the flimsiest of truths can be inflated to a Spinal Tapian 11. My prediction for this round? The findings of Mr. Horowitz will rank about a two on the Zano-scandal-meter, but as usual the GOP will upgrade this drivel to a 10. For all Republican scandals, just add eight. By the time everyone figures out the whole thing was Benghazi’d, it won’t matter (see: every other Republican-championed scandal of the 21st century). Meanwhile, using a reverse procedure, Mueller’s findings, which historians will ultimately rank an 11, will be transformed back into a pile of #2. This is more Alchemy for Dummies, a process designed to transmute the truth into Foxal Matter, and then back again.

Hint of the day:

It rhymes with the one thing you should talk to your investment broker about under GOP leadership.