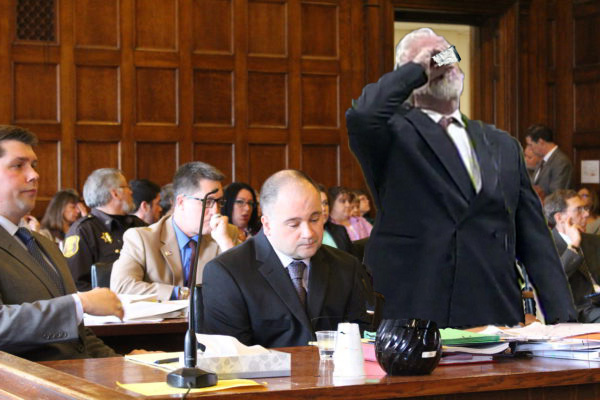 Norman, OK—A legal representative of Johnson & Johnson defended the pharmaceutical company’s role in the nation’s current opioid crisis by pulling a fentanyl patch from his pocket and stuffing it into his mouth. As gasps rifled through the courtroom, attorney Benjamin Crass spoke while bits of a gel-like substance oozed from a corner of his mouth, “See? Our opioid products are not dangerous, even the really strong ones like Fentanyl. You can spread this stuff on your morning bagel. Move over Philadelphia, right? I usually gnaw on these puppies with a little Cholula sauce, but it pairs well with a number of popular condiments.”

After downplaying the addiction risks of Johnson & Johnson’s products and then dodging all accountability for the rash of opioid related deaths, the attorney nodded off. He would start talking again and then stop in a series of fits and starts. Before losing consciousness, Crass slurred the following: “Look, we were making a shit-ton of money, people. A shit-ton! I thought this was America. Thanks Obama!”

The attorney was immediately transported to nearby Norman Regional Hospital where he was later declared DOA (Deplorable On Arrival). Trump weighed in on the matter with a presidential tweet that was almost immediately deleted, “I’ve approved a merger between Johnson & Johnson and those Narcan people, so they can profit off the whole cycle of overdose. Drugs don’t kill people, guns do!! Covfefe! Is this thing on?”

Upon reading the tweet, the CEO of Johnson & Johnson, Gabby Johnson retweeted and added, ” f’Ravish!!”