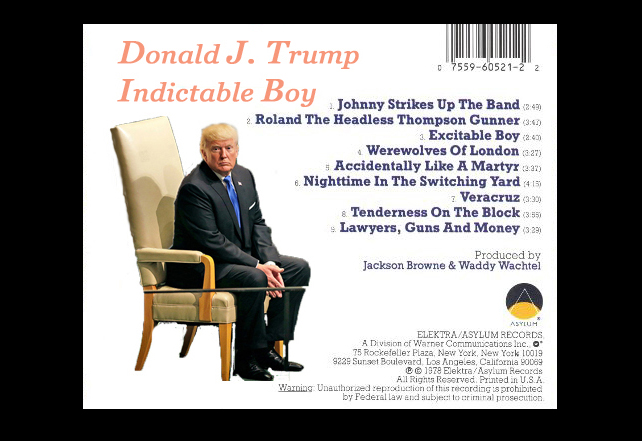 My friend and blogvesary has more questions about the Russia probe, but, suffice to say, Warren Zevon just went home with a waitress with Russian ties and that ended badly—offhand this seems much worse. Here’s another long comment from my friend that deserves a more in depth response. Enjoy!

Pokey: Here’s some of your recent quotes, Zano: “Trump’s peeps lied across the board,” “web of wrongdoing,” “Trump’s clear felonies.” These are more generalizations. Specifics please.

Zano: If you can’t follow today’s politics, always remember four Americans died in Benghazi and how Republicans weaponized all that bullshit into a series of investigations that ultimately elected an ass-clown. Fine. For those only listening to AM radio in some man cave, here’s my ever-growing list of Trumpian affronts to mankind:

The presidential barrier is the only thing standing between these two and indictments:

See? Both The Hill and the Hillary agree on something …and that happens, uh, never. And Mueller didn’t “choose not to indict”, he was acting from the false premise that you can’t indict a sitting president.

Some, but not all, of the impeachable offenses:

Crimes on the horizon:

Maybe you can’t see the lies, because they’re all lies, or you can’t see the crimes, because they’re all criminal. I don’t know, I think the answer probably lies more on the willful side of conservatism. And if Trump dodges all of this shit, which is possible, he will still be ranked among the bottom ten U.S. presidents in history, and I am actually betting on the rock bottom tier. The pattern of abuse and the damage to our republic and its institutions will be mind boggling. The only thing more mind boggling is this: how can someone outright ignore all this?

But by no means am I suggesting we bypass any legal proceedings. I wouldn’t miss them for the world! But I also realize this is a much steeper climb because, well, the president now appears to be above the law. Great timing. What could possibly go wrong?

Pokey: Here’s another of your recent quotes: “Mueller thought people could still read.” It is not a prosecutor’s role to release allegations against a person who he chooses NOT to indict. That’s called slander. Why do you take this prosecutor’s allegations as gospel truth? The Constitution guarantees that a person have their day in court to defend themselves against a prosecutor’s allegations. This prosecutor says that there is not enough evidence to indict Trump and take him to court; but he’s still going to release allegations about Trump of which Trump has no chance to defend himself. That is unethical and unconstitutional. Oh, that’s fair game for Zano and the Soviets (I mean the Democrats).

Zano: Power to the Resistors! Slander is Power! Freedom is Slavery …well, at least the way you people do it. Yes, Mueller should have indicted Trump for obstruction, but instead he left it up to the flawed, partisan-filled buggerama known as Congress. Bad Idea Jeans? Mueller should have been even clearer with his recommendations. If you haven’t noticed, the right can drive a fertilizer farm through even the smallest of ambiguities. It’s what they do. Kidding …you haven’t noticed.

Pokey: Let’s step back for a moment, Zano. This whole narrative that you have bought into doesn’t make any sense. Here’s the (bullshit) story that the high-ranking FBI officials tell us to justify their investigation including the Special Counsel–in late 2015 or early 2016 they became aware that the Russian government was attempting to infiltrate the Trump campaign, so they informed President Obama.

I know that you will avoid this very simple question because it shatters the entire narrative that you have so passionately embraced, but please consider this one simple question and give me any reasonable answer: what exactly did President Obama do (to thwart the Russians schemes) when these high-ranking FBI officials reported to him in late 2015 or early 2016 that Russians were working to infiltrate Trump’s campaign?* There is no evidence that Obama took any action against the Russians until after Trump was elected. Please let that sink in.

Zano: I was waiting for that one. What took you so long? Well, I have a couple of thoughts on this one. In short, it’s not acceptable on Obama’s part either. Of course, Obama didn’t have the clear picture we have today, aka evidence provided by the Mueller investigation. The report laid out the details of the impact of this coordinated and in-depth hacking campaign. These were much less clear under Obama’s watch as the intelligence community was only just becoming aware of the scope of the problem.

Also, there was a very real fear Republicans would spin these attacks to their favor on the lead up to the election. I am not saying it’s an excuse, but I understand the concern. Not knowing how known liars will react to events is something our last two Democratic presidents really struggled with. It’s a dangerous time, for sure, which is in part why I’ve called for the disbanding of The GOP in favor of something, anything …maybe just a conservative Meetup group …that doesn’t meet up.

Besides, President Obama did eventually slink over to Mitch McConnell’s office and share the intelligence community’s findings on the lead-up to the election. At that time McConnell threatened the president with all kinds of Hannitized propagandic Foxal nuggets if he went public (as expected).

“McConnell refused. As the Washington Post reported in 2017, when national security officials told congressional leaders about Russia’s interference, it was McConnell who not only didn’t want to alert the public, he also questioned the validity of the intelligence.” And, “Brian Beutler put it this way: “McConnell ran interference for Trump during the campaign to stop Obama from warning the country about things Trump was lying publicly about.”

Please, let that sink in.

So, yes, Obama should have been quicker on the draw, but there’s always a resistance to the truth from our Republican friends. It’s simply not their thing. But to have a full blown attack on our election play out, with details as presented by the special counsel, and to ignore them outright …well, that is a far far more egregious crime, isn’t it?

It reminds me of when Barney Frank, the man Republicans blame the subprime mortgage crisis on, came to George W. Bush (two years before the crash) saying we have a housing bubble issue, but Bush shooed him along because his friends were making too much money to give a shit.

You’re forgetting the algorithm, Poke. Start with the premise that Republicans are dead-wrong and when liberals do blunder—and they do blunder—it’s the Republican’s unpatriotic duty to somehow top that shit. It.Never.Fails.

Pokey: I know that you don’t want to hear this, Zano, but it doesn’t make any sense unless the high ranking FBI officials are lying and Sean Hannity is correct. Wait, wait, wait, don’t float off into Hyperbolic Generalization-land. Put your need to prove your rightness on hold for just a moment. Doesn’t it bother you at all that you are not able to give a reasonable answer to that one simple question? If you take that question seriously and research it to it’s conclusion (as I have done) you will understand the truth of this matter: the Obama administration was never seriously concerned about Russian interference until after Trump was elected. Obama directed the FBI to investigate the Trump campaign (not for reasons of justice or national security, but) for political reasons. Honestly, doesn’t that make sense to you?

Zano: I disagree, you research things to someone else’s conclusions. And to your point, no, things that make sense to me have to make sense to me. In your defense, whereas I have access to the news, you are only allowed tidbits that support a growing AM radio-spawned upside down. I usually understand the liberal political brain and their choices, but Republican thought processes and decision making is wholly irrational in the 21st century. Today’s GOP …well, envision Ozzy Osbourne and Jerry Garcia co-conducting a bullet train full of nukes heading toward a reactor.