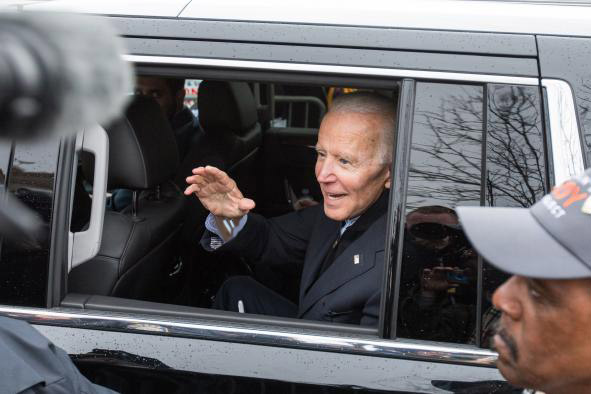 U.S.A, U.S.A!—Shortly after announcing his presidential bid, the Joe Biden campaign unleashed hundreds of overly affectionate robotic surrogates on an unsuspecting countryside. This Army of Artificial Presidential Replicants (AAPRs), or ‘A.I. Joes’, are sweeping the nation. Yes, they have a sweeper feature! In fact, the Veep is so good at cleaning up our streets after the 45th president, he’s already being sued by the makers of Rumba. These political rovers, or ‘Joeborgs’, are capable of both waving out of the limo window and/or shouting random gaffes at passersby. Amidst the largest field in history, Biden explained his decision to go high-tech, “I think the best way to connect with millennials today is to have USB ports. Besides, as a kid I always loved ice cream trucks, so what better way to bridge the gap between old and new than by having children running after a limo with a robot of me in it? There’s also a second robot of me actually driving the thing! And don’t worry mom and dad, the gun turrets are just a deterrent. The Secret Cyberdyne Service insisted.”

Cyberdyne Systems, the makers of the Biden 5000, are pleased with the current death-to-probable-vote mission ratio. Speaking of current, a Cyberdyne spokesman is downplaying the recall of their Crowd-Energizer series, despite numerous complaints of actual electrical shocks being felt by potential voters.

In an attempt to get out in front of this malfunction, Biden said, “My Bidenquins are perfectly safe, certainly more so than our current president. My robotic counterparts are made in America, by Americans, for real American domination *cough* unity. Batteries sold-out separately. Oh, and we didn’t skimp on any of the special features. A.I. Joe even comes with Kung Fu grip! Won’t Trump be surprised when he goes to shake my hand at the onset of the first presidential debate? Snapping turtle force? He’ll wish.”

Cyberdyne would like to remind everyone, including illegal felon voters, to please insert coins into your friendly neighborhood Biden 5000, for Four more years! Four more years! “Kidding,” said Biden. “Donations start at one million quarters, folks, because I’m already way behind Beto and Bernie.”

Thus far the Biden campaign is downplaying rumors of a potential Biden/Zoltar ticket.