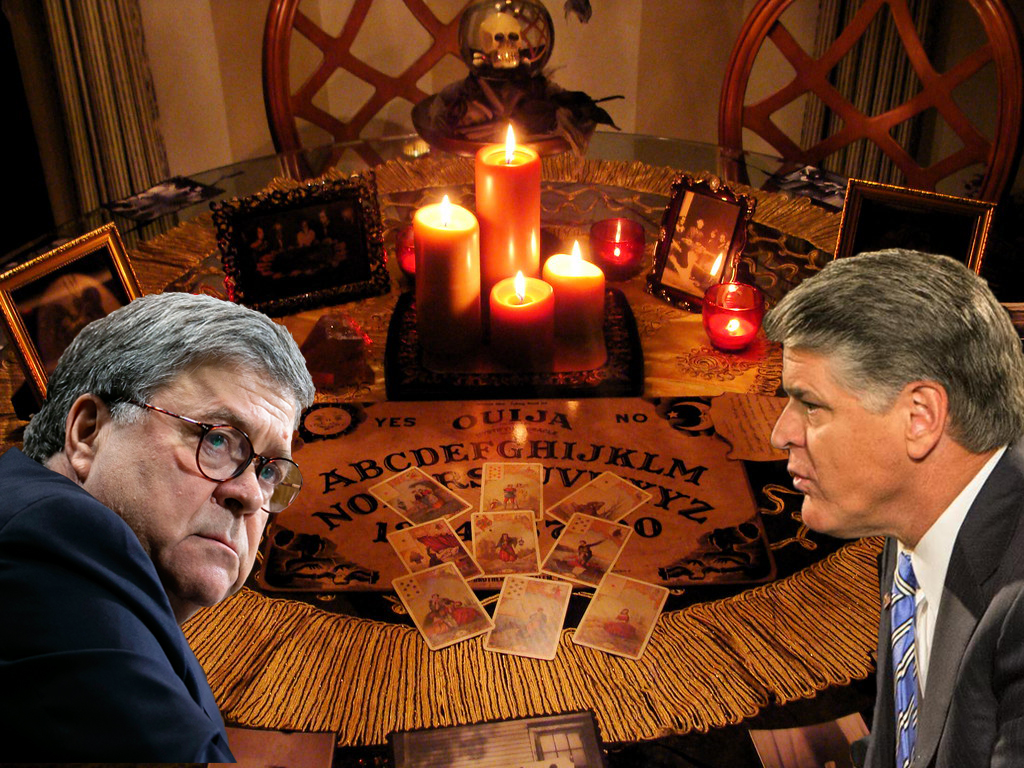 AG William Barr is walking a tightrope between salvaging the last remnants of his reputation, and making something stick on the latest Hannity-spawned spy novel narrative. The inability to find anything truly damning is likely behind the delay in the release of the FISA report. Barr only needed a day to reduce Mueller’s work to: “No collusion, no obstruction,” but making up shit that people will be imprisoned for is a tougher task, even for assholes.  Don’t fret, Republicans, those “scandals” did their job. How else would we have a republic-ending ass clown in office? Now their latest installment of Spygate, headed by John “Bullshit” Durham, has apparently uncovered some crimes. Double-spaced documents, improper use of headers, and even margin issues occurred at the highest levels of our intelligence community. There’s a slew of formatting atrocities that will break this case wide open.

Spygate has already sent our intrepid AG to Rome, after which he was forced to say something like, “Yeah, we have some real leads, some real leads, Mr. President, uh, on both the pizza Romana and those Roman artichokes that you love so much. Kill me.”  But don’t feel bad for him, Mr. Barr will do just fine in today’s post-truth and post-political world, where crap is king.

Here’s how it used to work: in true cliffhanger fashion, Fox & Friends promise how the meandering/tangential/fictional story they’ve been blathering on about is just about to break wide open ...any day now. It never happens, of course, because it’s fictional, but it’s designed to keep the Deplorables on the edge of their seat just long enough for the Breitbarts of the world to create the next exciting installment. Land of Make Everyone Believe?

“My sources tell me it (Spygate) will shock the conscience and soul of the nation.”

In related news, Republicans claim to have a conscience.

Spygate Summary Alert: several members of the intelligence community were concerned that a presidential candidate represented a security threat …and, as it turns, that was a major understatement.

“For weeks, it’s been speculated the long-awaited review of alleged surveillance abuses by the Department of Justice and the FBI during the investigation into Russia’s purported meddling in the 2016 presidential election could drop any day. It’s still not here.”

Again, it’s tough to make shit up, Brooke, so show a little patience. Second, look at her use of the word “purported.” Fox News is still openly denying Russian meddling in our elections. Wow. How about this one, Fox is purported to be a news broadcast.

Spygate represents a dangerous escalation of the usual right-wing scandal quest. With Moscow Mitch heading the Senate and Trump’s new Roy Cohn heading the DOJ, for the first time ever the right can truly weaponize falsehoods. They can now create, not just a diversion, but a new version of reality from Foxal matter that will have real world consequences for imaginary wrongdoing. In this reality, the owners of the pizza parlor—the ringleaders of an alleged sex ring operation—would be forced to dig out a basement under their establishment, and would then be charged for running a sex ring out of it.

Hillary’s exoneration represents the last verdict from a simpler time, when the US operated under the rule of law. The conclusion of Spygate will be more like: we couldn’t find anything, so you’re going away for a long, long time.

This week Bill Kristol pushed back on such a theory with: “The inner structure of the DOJ will hold,” and “I don’t think people in the trenches will allow that to happen (paraphrased).” What? Somehow I think our resident J Edgar Hoovers of the world will squash the Joe Fridays, every friggin’ time.

The top of these organizations will drive the investigations, the narrative, and the conclusion. And any minor procedural transgression will now rise to the level of treason. Or:

I don’t think the new whistle-blower policy is going to help either:

A. Blow on whistle, and: B. Wait for trap door to open above shark tank.

Here’s what I want to know: when each and every conversation this president has with world leaders likely ranges from impeachable to indictable, who gave the order to stop spying on the enemy within? At best, three years ago, a pack of security clearance conundrums strolled into 1600 Pennsylvania Ave and at worst a crime syndicate. Each and every news cycle we move closer to the crime syndicate designation. Many of these miscreants shouldn’t have access to a White House tour group, let alone highly classified info. Thankfully, some of our savvier intelligence peeps took notice. Hell, even no-speaky-spook Mueller admitted Trump was compromised to Moscow. So who gave the order to stop listening to Drumpf and his band of murky men? I want names.

For those keeping score, America died that day in Helsinki when our man-child president strolled into a meeting with a KGB agent, wholly unsupervised. How did we allow our president to meet with his new boss alone? Does the US even have an HR director? Maybe it’s time for Kansas to pee into this cup.

By the way, how does this president not understand the meaning of the word “collusion”, post Mueller? Since assuming command, collusion is probably the only word the president has added to his dazzling lexicon. He understands what it means, and he also realizes he can beat any related rap. His new Roy Cohn is finally in place and the DOJ is thankfully shifting its focus to the president’s enemies, real and imagined.

So the day after the Mueller report was released we get, “Hey Rudy, get that new Ukraine fella on the phone. I have a plan.” The Audacity of Dope?

Many are wondering if anyone will even want to investigate the Trump crime family with the deck stacked this way. One minor procedural slip up and you’re bunking with McCabe. Yeah, I think he’s in the most jeopardy. His breach of protocol is trivial, yet tangible (aka, he’s doomed). I already ordered my Free McCabe t-shirt. Comey pulled a slew of weird shenanigans, but the ones that are more arguably court worthy impacted Hillary, not Trump, so they won’t want to muddy their false narrative with any Al Gorian truths.

Just yesterday, minus any proof, a sitting president called his predecessor a traitor.

On the flip side, Obama failed to say that and probably should have. If nothing else, Spygate may show us what the intelligence community knows and when they knew it. It is time for them to come clean, so to spook. When a truth is revealed it never benefits the GOP (see: 21st century US history). The information will be damning, for Trump, and yet somehow the accusers will pay. But remember, some day this Age of Tyranny will end and the evidence will once again be considered evidence.

I have yet to comment on the Ukraine transcript; here’s my take:

Can Ukraine take the blame for interference in the 2016, please?

Who benefits? Trump and Putin.

Can you get me dirt on Biden, please?

Who benefits? Trump and Putin.

There is a real concern that Trump’s approach is moving the Ukraine further away from the EU and into the hands of Russia.

When does U.S. interests enter into U.S. foreign policy? Who thinks this is okay? The most damning part of this phone call is actually Trump asking Kiev to take the rap for Moscow’s interference in the 2016 election. WTF? Let’s just evoke the 25th Amendment for our president being dumb enough to freely release the transcript. This is the one time he chooses not to obstruct? Really?

For this investigation the Barr is set very low, so they will find something, and Fox will then call whatever it is, “The worst abuse of power in history!!”

If you think our primary business with the Ukraine is the encouragement of that country to take the blame for Russian interference in the 2016 election and dirt on the Biden’s, you may be a Republican. I can hear my old blogvesary now, where’s the crime? Unbelievable. Just because they are being conducted out in broad daylight, doesn’t make them any less criminal. Making crimes legal is the primary strategy of Trump. The office of the OLC is the heart of darkness. They protected Bush from war crimes and are rewriting our laws to protect the president from any and all wrongdoing.

Tyranny is dynamic, not linear. We do know the president committed almost the definition of an impeachable offense (bribery,extortion), and he keeps upping the ante. China, are you listening? Hopefully they are, because our own Republican party is wholly incapable of such a feat.

Let’s be clear what’s happening here: while a president is being impeached for egregious acts, the right-wing media remains laser focused on procedural problems involving of the origins of an investigation that netted 34 indictments. And should anyone be surprised by this?