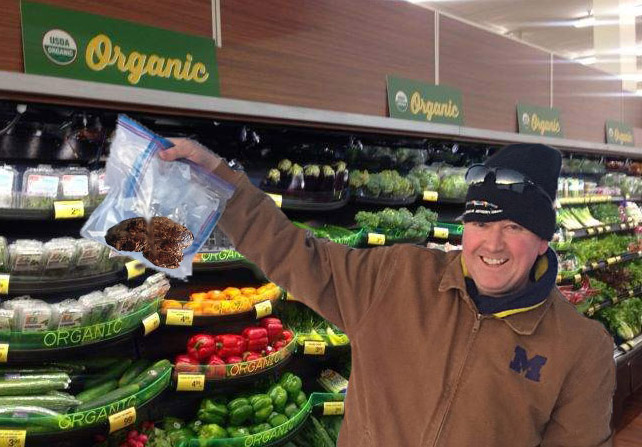 Flagstaff, AZ—Team Search Truth Quest (STQ) believes they obtained irrefutable evidence of the existence of a hominid-like primate living in the produce section of a local Safeway. According to DNA testing, via STQ member Alex Bone’s iPhone app, the scat contains both human and primate DNA. Captain of STQ, Mick Zano, said, “This is like finding the Holy Grail inside the Arc of the Covenant inside of Bigfoot. Our findings prove Sasquatch is at least as real as the Flying Spaghetti Monster.” The scat was found near the pre-made salads, which led the team to conclude Bigfoot is no longer chopping its own vegetables in the wild. The team of cryptid hunters told the Discord today that “this is just the tip of the iceberg lettuce.”

On the morning of February 17th, Team Search Truth Quest arrived at their local Safeway shortly after Stanley Meyers tagged and bagged the brown lump of historic scat. The team quickly discovered some wet footprints that suggested a large creature had been lumbering near the celery and broccoli. Bigfoot researcher, Dr. Jeffrey Meldrum of the Department of Biological Sciences, was able to analyze some of the resulting casts. “These were originally just some dirt prints on the floor of a grocery store,” said Dr. Meldrum. “I have no idea what compelled them to make plaster casts on linoleum. They should have just taken a pictures of the footprints with their cellphones. I’d like to say I’m surprised, but these are the same people who sent me ‘a piece of the Flying Spaghetti Monster’ that turned out to be an Udon noodle, with trace amounts of sesame and ginger. And I question their other ‘evidence’, but only because a DNA phone app does not yet exist.”

Captain Zano responded, “So you believe in the Flying Spaghetti Monster, but not a new technological iPhone app? Okay, sure… I’ll give you a Bigfoot print, on your ass.”

Team STQ sent their important findings to Coast to Coast AM’s George Nori, who promptly reminded them the details of the ongoing restraining order.