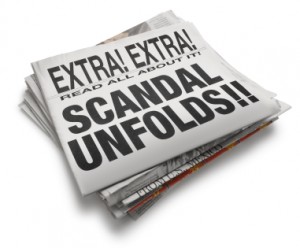 If President Trump wants us all to be a little more like North Koreans, here’s my Daily Despot decree. Hear ye, hear ye, all Republicans! Authoritarianism is the opposite of freedom  …oh, and it doesn’t involve supporting your local authors either. Here’s a handy dandy scandal overview that lists the findings of our special counsels and judicial experts over the years. The conclusions of these investigations show how our right-wing types always get their day in court, but probably shouldn’t. How many thousands of news hours are wasted each year by Fox and Frauds? Hasn’t it gone on long enough? If our Republican friends devolve any further, grasping for straws will become much harder (what with the lack of opposable thumbs and all).

Here is a list of each of the main rightwing scandals over the last quarter century plus, and the judiciary’s ultimate conclusions:

The White Water Scandal: This is when Republicans actually accused the Clintons of murdering an associate in the 1990s. Conclusion: “After six years and more than $50 million in taxpayer money later, an independent counsel has concluded there is ‘insufficient evidence’ to charge President Clinton and First Lady Hillary Rodham Clinton with any criminal wrongdoing.” -CBS

Fast & Furious: This was a botched arms running gambit and a sequel to something started by Dubya. Conclusion: the DOJ’s Inspector General at the time cleared Eric Holder of any wrongdoing and President Obama was never implicated.

The Solyndra Solar Energy Scandal: This was a government supported solar startup that failed because the cost of silicon dropped, which allowed China to gain the upper hand. Conclusion: The House Energy and Commerce Committee Investigation found no political manipulation or wrongdoing of any kind. (So now can we please attempt to catch up to China on green energies? Kidding, we’re screwed.)

The IRS Scandal: This involved suspected targeting of political adversaries for tax audits. Conclusion: The District of Columbia’s DOJ, Ronald Marchens, found insufficient evidence of wrongdoing. And now President Trump has an IRS target on his back the size of, uh, a Target. Can he pardon himself from his own tax evasion? (H&R Blockheads?)

Climate-gate: This is a moment in time when the Republican intelligentsia actually tried to decipher a scientific study on global warming (and probably shouldn’t have). Conclusion:  The National Science Foundation cleared all scientists of any and all wrongdoing (Some Like It Hot? Now if you could just sneak some of their actual findings into Trump’s intelligence briefings… Oh right, NM.)

Benghazi: This scandal involves… uh, I have no fucking idea, but it lasted longer than the airing of the TV show Cheers. Conclusion: Trey Sometimes-it-takes-me-a-long-time-to-figure-stuff-out Gowdy (R) found no criminal wrongdoing after looking under every stone in frickin’ Libya (33 times).

Birther-gate: This is when Trump accused Obama of being born in Kenya. Conclusion: The Hawaii State Health Department released Obama’s ‘long form’ birth certificate and then backed Bill Maher’s inquiry to have Trump use Ancestry.com to determine if he is, in fact, an orangutan.

Fun Fact: Colin Powell had the same private server set up, Team Trump started their tenor with personal/unprotected devices, and this week we found out that so did the former FBI director, James Comey! Can you say selective enforcement? Can you spell misogyny? He-man Woman Haters club? At least Comey didn’t indict her for what he was doing too.

Clinton Foundation & Uranium One: This is when Republicans claimed Hillary Clinton sold uranium to Russia from her Etsy account, or something. Conclusion: AG Sessions (R), Trey Gowdy (R) found insufficient evidence to appoint a special counsel. (Centrifuge or subterfuge?)

Lynch’s ‘Unmasking’ of Trump aids: This is when Republicans thought AG Loretta Lynch was monitoring Trumpanzees illegally for political purposes. Conclusion: Lynch was cleared of all allegations by ALL members of the House and Senate intelligence committees, D and R. (Lynch mob?)

The “Salacious & Unverified” Russian Dossier: Trey Gowdy (R) found insufficient evidence to appoint a special counsel to review the supposed political origins of the Steele Dossier, which some wrongly think triggered the Russian probe (and Gowdy did this while playing Draco Malfoy in those Harry Potter films).

Pizzagate: Mick Zano found this scandal did not arrive hot and fresh at his door within 30 minutes. I think this one was thrown out of court, with pepperoni *cough*, I mean with prejudice.

“The Inspector General and congressional investigations have debunked conspiracy theories about a cabal of insiders using their power to unfairly attack Trump.” -NPR

Is everyone in our judiciary system working for the Clinton Foundation, Pokey? Hmmm. These were all false scandals, but they were effective, weren’t they? All of them helped move the needle away from the reasonable toward the unconscionable. And for our last general election, it helped the misinformed elect the moronic. And, if you peruse the end points of each investigation on that list, most of these conclusions were arrived at by Republican investigators/judges. But how long can their impartiality last? Sure the judicial branch seems like the GOP’s last bastion of sanity, but the next generation was appointed by Trump himself. So the next White Water-style accusation may well result in a murder charge.

As for the damning personal text between Agents Sturm & Drang:

“I remain concerned that so few FBI agents did not identify Trump as a clear and present danger to our republic.”

Where is the proof these biased FBI folks attempted to change the outcome of the investigation? Oh that’s right, there isn’t any. You want unbiased peeps in the Age of Ass-clown? Good luck with that. Trump may walk because of rampant increasing biased polarization inherent in our system. Where could Trump get a fair trial in this solar system?

[Uranus joke removed by the editor.]

Having read the infamous text exchange, I agree with their assessment. It indicates functional frontal lobes. Maybe if your IQ is too high you shouldn’t be able to become an intelligence agent. I am guessing we may find that Agent Strzok thought there was already enough evidence to impeach ass-clown. Besides, Mueller promptly fired these peeps …uh, for having keen political insights. Nice.

So here’s your assignment, Pokey, find a similar list where I went afoul and backed a slew of meaningless Republican scandals. Kidding, don’t waste your time. There. Aren’t. Any. Did FBI missteps occur during the lead up to the election? Certainly. Was more damage done to the Hillary campaign than Trump’s? Definitely. Does it have anything to do with the pending impeachment of a sitting president? No, sir. You people give rampant, glue-sniffing extrapolation a bad name.

Now we can safely add how nine out of ten judiciary appointees do not agree with Republican theories to the list of other professionals, aka: climates scientists, economist, historians, psychiatrists, addiction specialists, sociologists etc. (my full feature on this here).

If we live in two different dimensions, Pokey, why does almost every professional agree with my predictions/assessments, every time? If the boiler room in your office building is about to explode, the Republican employees on-hand would probably remain fixated on ‘that guy from finance who keeps strolling in late.’

True or false, Zano, that guy from finance is always strolling in late!