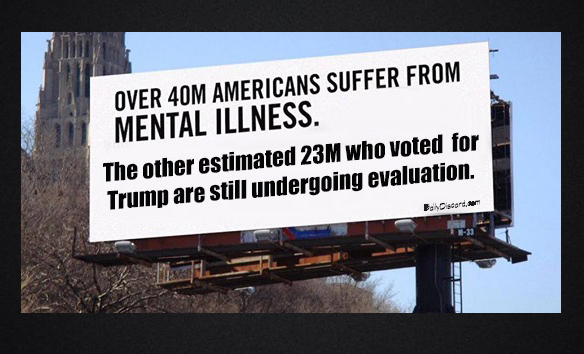 We don’t need to track the mentally ill, Mr. President, they already self identify with bright red hats. Modern conservatism is a form of collective mental illness powered by a cluster of cognitive distortions, dysfunction, and dissonance, oh my. But I’m finally onto a cure, folks! Moron that in a bit. Meanwhile, I loved when Kellyanne Conway’s husband recently suggested Trump be dropped off at Walter Reed Hospital. The threshold for involuntary commitment is simple: is someone a danger to themselves or others? If the president arrived on my shift at the old crisis unit, my conversation with the Secret Service might go down something like this:

“Can someone keep the nuclear football safe until the president can be fully assessed? What? Yes, sir, he can still be on Twitter …under supervision. And you can bring him a Happy Meal, but he can’t have the toy …because it could be a choking hazard, or fashioned into a shank. A shank …just tell him, you know, what he’s trying to pay someone to do to his old lawyer in prison. Oh, and he’s going to have to relinquish his tie. Why? …well, for starters, you could hang everyone on the crisis unit with that thing.”

[Gallows Poll & Fit to be Tied jokes outsourced to China.]

We all suffer from some level of cognitive distortions, but Republicans seem particularly vulnerable to a wide array of faulty thinking (Zano, 1863). The Dunning-Kruger effect is the driving force behind such a spectacularly damaged worldview. This know-it-all phenomenon For Dummies creates an environment wherein some truly deplorable views can become mainstream, even Gospel worthy:

“Of course we have to separate immigrant children from their families, as to traumatize the healthy ones, while deporting the sick ones to an almost certain death …you know, for Jesus.”

—The Gospel of Donald

The rising authoritarians themselves should not scare us nearly as much as the large swaths of society willing to allow such monsters to sweep into power. Without his rabid base, Trump is just another dude in an orange pompadour …actually, are there any others?

“Fromm, who was a student of Jung, took a less mechanistic approach to authoritarian psychology. He argued in books such as The Fear of Freedom that the power of totalitarian regimes in particular derived at least as much from the inculcation and development of a relationship of emotional attachment to and dependence on authority as from the repression of personal physical drives.”

This is the heart of it, isn’t it? There’s a driving hidden desire for many of these bootstrap-picker-uppers (BPUs) to be led. Puritanical Putinism? “I want to be free. Show me how to do that.” This is the fuel behind the current MAGA-fire and, worse still, it seems to be the ‘distortion of choice’ for the deplorables. It’s why our supposedly constitution-minded citizens can allow an authoritarian to sweep into power, wholly unnoticed. It’s how freedom becomes freedumb.

Again, whereas liberals tend to use executive functions to make decisions, republicans rely primarily on emotional reactions, here, but both the reptilian brain and the Dunning-Kruger effect seem to work hand-in-hand with an absolutely gob smacking level of cognitive dissonance, or my favorite: 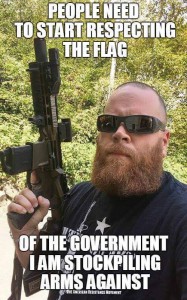 Thanks to Mathew Yglesias I stumbled onto the oldest article that supports my theory, Personality and Polarisation (2012). It’s probably not the origin, uh, because I am, here and here, but Will Wilkinson floats this same theory that personality differences play a huge role in party affiliation. This week Yglesias covered a new study wherein participants are presented an image and then asked: is this art? Those who felt the image was clearly not art were much more likely to support Donald Trump. This further supports a growing body of psychological research suggesting liberals have a greater “openness to experience” than Republicans. Again, most surveyed were not artists, but Republicans tend to think they’re the authority on everything.

[Jackshits Of All Trade Wars joke blocked by the Port Authority.]

Of course, personality disorders—as well as the more maladaptive version, a full-blown Trumpsonality disorder—are grounded in several entrenched personality traits. This is why I remain pessimistic about a viable solution, well …short of impeachment, indictment or deportation, oh my. But as a liberal, we should keep right-wing families together, in the same cage, as they’re lowered over the gunwale. Or, my old saying, innocent until to proven Republican.

At least one neuroscientist agrees (not with the drowning of children part, but my original premise):

“So what can we do to potentially change the minds of Trump loyalists before voting in 2020? As a cognitive neuroscientist, it grieves me to say that there may be nothing we can do. The overwhelming majority of these people may be beyond reach, at least in the short term.”

—Dr. Robert Azarian (currently guarded by a gaggle of swirling Dementors of Azariankaban)

What Dr. A is not admitting is this: the prognosis is bad for Republicans in the long term as well. And we have sooo much time on this warming ball of whirling dirt to explain shit to them. I’ll clear the calendar clear up to the apocalypse. If you can pick one thing the field of behavioral health sucks at and it’s fixing those suffering from a personality disorder. This same Azkaban article (see what you started?) mentions a Terror Management Theory, which highlights how certain leaders tap into the existential angst, or that need that many have to be led. They do this by triggering the right-leaning voter’s already engorged amygdalas (that story here). Essentially they feel safer when they think they’re a part of something greater than themselves.

[Hint of the Day: recent Discord study suggests, everything is greater than themselves.]

So when a country, tribe, or group share a common enemy, it forms a buffer that “instills life with meaning and value.” This is why Republican thought thrived under Leninism, McCarthyism and Ringoism. It’s also why Jonah Goldberg (the 6th Beatle) thinks: Without a Suitable Enemy, Trump is adrift.  Hey, maybe we can fire up Mecha-Rosie before Trump invades Toronto?

A pair of recent studies, Political Conservatism as Motivated Social Cognition and one from Northwestern, offer more proof of an increase in rigid thinking in the Republican brain. As I’ve discussed, modern conservatives tend to have less brainular flexibility.

“Cognitive differences in people with different political orientations are apparent in a task that some consider to be convergent thinking: finding a single solution to a problem.”

See? They wouldn’t even think to coin the phrase “brainular flexibility”. Again, this is how Republicans reduce the causes of the great recession to Barney Frank, or socialism to Venezuela. A solution to any problem must not exceed stated twitter character guidelines or five neurons, at best. And the Sean Hannitys of the world, somewhat shy of that mark, do the rest.

For those familiar with the horrors of the average individual personality disorder, they generally lack empathy for others. And they’re the folks who arrive with an inflated self-importance and intelligence as well as an array of unrealistic expectations. They believe they’re the most important country in the room, so they will demand all the energy/services/resources/attention/freebes from the surrounding staff/peers/pedestrians/volunteers/peer supports/emergency personnel, doctors/gang bangers/Time Lords and rouge cleric wizard to meet their extravagant needs. Sorry …Bone is trying to get another D&D game going. Sound familiar?

Each individual Republican may or may not exhibit such traits, but collectively that’s the score, and it does make sense when you look at the Nixons, Cheneys, and Trumps of the world.

Didn’t you say something about a solution, Zano?

About that …uh, there are some treatments: Cognitive Behavioral Therapy (CBT) is the gold standard in psychology; it’s designed to combat distorted thinking, but what would that look like on a societal setting? More specifically, treatment for a personality disorder adopts a variation of CBT called Dialectic Behavior Therapy. But I have yet to understand how this therapy can be adapted to help registered Republicans. First off, treatment is only administered when a person realizes they need help …said no Trump supporter ever. Secondly, if you look at some of the key concepts that therapists are trying to convey through DBT, things get even worse:

Having diagnosed Republicans, long ago, I kind of gave up on the prognosis part, but it’s worth another look as our future may depend on it. How do we adopt a treatment for an unwilling faction? It goes against every principle of psychology? So how do we encourage an upward political shift to shift out of this Sarah Palin/Trailer Park Boys mentality toward a more meaningful level of consciousness? I think micro-doses of psilocybin in the water supply would do the trick. Sure it’s illegal, but it’s for a good unicorn.

Transpersonal psychologists have been struggling with this consciousness shift-issue for decades, here. Wisdom for many of these folks is more about acknowledging what you don’t know. But if almost everything an entire political party thinks and believes is built on a framework of irrationality, how do you make a dent? Worse still, they want to believe their own nonsense, so contradictory data simply doesn’t register. The Crank, who used to contribute for The Discord, just posted this Andrew Sullivan article on FB. It’s a good article about that fine line between supporting the LGBTQ community and the open indoctrination of children. Before you judge, Andrew is right and he’s gay (and he’s right).

What The Crank missed, however, is how every other Sully article can be summarized thusly: Has Trump Already Permanently Destroyed Our Democracy? Missed all those, huh? Similarly, while searching back for my DSM stuff, I found this gem from another former Discord contributor, Is Barack Obama a Textbook Narcissist? Seriously? Did Dunning and/or Kruger help you with that one, Pernick? This is why I link back to shit and Republicans refuse. See? They can make good decisions.

Whenever I talk to a Republican in my personal life any truth is met with scorn. Try it out. Thoroughly research one thing (and it doesn’t have to be related to politics), and then state what you’ve learned. Just saying it outloud will trigger a negative response. Republicans have been conditioned to respond negatively to facts, you know, like a vampire at a—

[Winslow: it’s too soon to make a joke about your garlic festival mass shooting joke.]

Jonah Goldberg just posited a different theory. He thinks Republicans don’t want to give an inch to Blue America, because it will only be used against them and, once again, anything is better than electing a smart person. Oh, and apparently linguistic complexity also differs from D to R. One study looked at nearly 400,00 speeches to compare Republican and liberal politicians, mostly US and UK, to assess the relative grade levels. Hint: the R side is almost as bad as our president’s.

Let’s review, courtesy of the Nazis:

Jane and boy take Tarzan’s benefits. Tarzan done being nice to bad men! There …did I communicate well enough for you dipshits? I’m sure there’s a peer-reviewed study somewhere that refers to Republicans as dipshits. Me still researching.