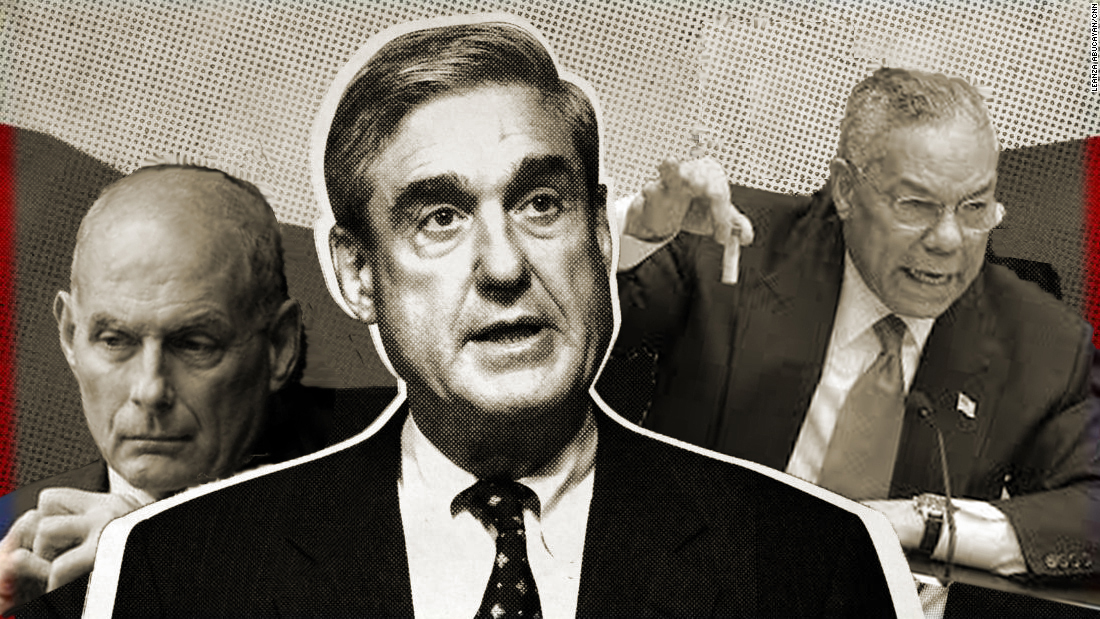 Sometimes I still think highly of our top military brass and our MIB-spook-types. Despite my disgust with our industrial military complex in general—with its egregious abuses to our environment and its abysmal failure to allocate their Dr. Evil gazillions responsibly—certainly some military luminaries demand our respect. In the end, however, it’s those “good soldiers” who tend to betray us. I’m talking about those folks who insist on staying in their lane while Rome burns. Former Defense Secretary, General Mattis, rightly stepped down in protest over Trump’s dangerous inconsistencies with troop involvement/levels in Syria. General Petraeus remains one of the leading military intelligence minds of our time and, back in the day, General Wesley Clark broke ranks, or broke something by leaking Dubya’s master plan to topple seven regimes in the Middle East—all for the purpose of planting magic democracy beans, you know, the ones he no doubt purchased from an as yet undisclosed bean dealer with ties to the Saudi Royals. However, these military bright spots seem to be the exception, not the rule. In the end these institutions simply do not prepare our military personnel, or our intelligence officers for the insidiousness of today’s body politic. They will sell out their country under the pretense of some misguided sense of duty and for that we should damn them along with the rest of the Republican shit show.

Under George W. Bush, circa 2003, I looked to General Colin Powell for insight and only supported the invasion of Iraq after he endorsed the war during his UN speech while waving around a fake vile of anthrax. Kidding, I was actually wondering if he would step down that day rather than sully his reputation on the world stage. That moment is still etched in my mind. I said he would regret endorsing this shit sandwich for the rest of life, and later Powell admitted, “I regret having endorsed this shit sandwich, and will for the rest of life.”  Fine, here’s a link to what he actually said.

Fast forward to the Trump Administration and some other military enablers who have surfaced. Retired Chief of Staff General John Kelly comes to mind. He sadly fell short of condemning the Trumpsters, despite admitting upon leaving, “God punished me, I guess.” Meanwhile, here was my joke the day he skulked up to the White House. 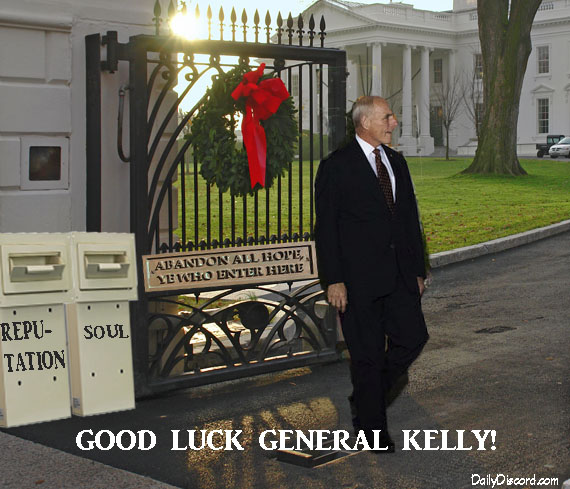 Sure the good General is nonplussed by his less than stable tenure, but in the end he defended his clown-boss for far too long. There’s no excuse for this betrayal. Among the other duties he follows, no doubt to the letter, one of them should be a duty to warn. Stand up, like the man that we all know you are, and warn your country that our commander in chief is unfit as fuck. You can use a more socially acceptable word if you want …like shit-fuck. Please identify this growing threat to our national security, now, because anything less is unconscionable. Taking into account how this is likely all going to go down, you are not going to be happy with this unjustifiable “good soldier” routine. In fact, I’m sure you witnessed some obvious impeachable offenses on your watch. If I could identify them from the nosebleed section, I’m sure you could spot them from the dugout.

Today the last good soldier enters the scene, our resident spook and Second Lieutenant, Robert I-thought-people-could-still-read Mueller. The day he released his nearly 500 page legalese extravaganza, in Klingon, I said, “No matter what it says or means the Mueller report is an unmitigated disaster.” Full post, here. How could he have remained so oblivious to the political climate? I worry even Biden is similarly tone deaf. The political parties are not getting on the same page any decade soon. Unity is out of the question. I am not unifying with criminals. They must be beaten, fairly, through known democratic norms, or at least what’s left of them.

Kenneth Starr, the Special Counsel assigned to ruin Bill Clinton, could give any opinion/summary/assessment of a White House BJ in any format he desired: video, soliloquy, rap, sonnet …oral …scratch ‘n sniff (sorry). The rules don’t seem to apply except when they are used to defend the most dangerous criminals among us. If they truly are the best of the best, our military needs to order some Ginkoba, or that shit with the jellyfish protein. Mueller will now face Spygate and his former department will be deconstructed brick by brick, regardless of the merits of the inquisition. He deserves to watch. Not being clear was a fatal error, not just for his investigation, but for our country as a whole.

Before the report was released I asked, who would be Trump’s Scooter Libby? The guy who takes the fall for these wrongdoings, and this same question must be asked of Mueller, preferably during his testimony. Sorry, you can’t just slink away, sir. This is a bit of a retraction for me, because if nothing else I said the Mueller report should close the door on conspiracy, but it clearly doesn’t. In the end conspiracy was not provable because lack of cooperation from key witnesses and successful obstruction from our president. It’s in the report, yet even Dems don’t seem to be talking about it.

Finally, just before posting the NYTs covered this today!

“The longer one spends with the report, the more disturbing a document it is, despite the initial fuzziness of some of Mr. Mueller’s conclusions. The instances here make up only about 12 pages out of a report that spans hundreds. Mr. Mueller makes clear that the Russian government interfered in the 2016 election with the goal of supporting Mr. Trump; that the Trump campaign sought to benefit from that interference; and that the president worked to put to an end to the office investigating the interference effort.”

He talks about Manafort really being the dead end with Russian spy Konstantin Kilimnik. Manafort shared sensitive polling campaign demographic information with him, knowing he was a spy, but Mueller could never reveal the ultimate purpose of the exchange, so he’s one of the Libbys, but probably not the only one. Again, tons of quids and tons of pros, but Mueller somehow failed to connect a quid a pro and a quo.

Yeah, no collusion …if you can’t read and process information. So back to my predictions from day one of the Mueller Report:

This is pretty much where I was two years ago. Not much has changed. Another reason Mueller failed, he brought us up to what we already knew, damning as that is. So here are some questions to Mueller over for his testimony to come:

Which Trumpsters obstructed justice, blocking you and your team from determining whether or not conspiracy charges were warranted?

Your scope was limited, so what are the other key areas are still worthy to pursue? Or what did you investigate and what haven’t you?

Of all of your own dealings with obstruction of justice cases/convictions, where does this fall percentage-wise: top 10% of cases, bottom 50% etc?

Knowing what we know now, as spelled out in your report, do you think failing to protect our next election is an impeachable offense?

Put him on the spot. Screw this ambiguity bullshit. The right lies in very succinct tweets, so their lies must be countered as clearly and concisely. He’s not going to answer directly whether the president broke the law, but he should still be asked.

And, if Mueller’s report proves damning and Spygate goes all Fast & Furious on us, every senator who failed to hold this president accountable must pay. This is still wishful thinking, of course. Justice is no longer our thing. And if the right can interpret the Mueller Report as “full exoneration”, can you imagine what the flip-side of Spygate will look like? I can. Anyone who worked on the origins of the Russia probe with dull pencils will be charged with treason! Bigly treason! Death to Trump’s enemies!

Spygate, like every other segment on Hannity’s America, is simply a distraction. Let’s take a break from the most corrupt administration in U.S. history so that we may march his enemies to the gallows pole (and several other Zeppelin songs).

[Fool in the Reigns, When the Levin Breaks, What is and What Should Never Vote, Strzok & Roll, and Your Time is Gonna Comey jokes removed by the editor and sent Over the Hannity and Barr Away.]

What about the Immigrant Song joke, Winslow!

[Sorry, Zano, it was already deported.]

Recently the latest tactic from the right has surfaced. They will attempt to tie the Democratic front runner, Joe Biden, to this Spygate nonsense: Biden is part of the deep state plot to bring down Trump. This represents the next chapter in the delusional descent of the GOP and our nation along with them. Worse still, it will work, because it always does. None of their scandals have any merit, but they do exactly what they are designed to do, namely, muddy shit up. Who will be the next good soldier to feature prominently in our country’s pending demise? Probably our next Secretary of Defense. That’s my best guess. And if you’re wondering about John Bolton, he isn’t a soldier …he’s just an asshole.

Whereas Powell was an active accomplice to Bush and Cheney and more directly lied us into war, General Kelly’s crimes were more of the guilt-by-omission variety. He failed to expose the Trump crime family, and the consequences will prove grave. Mueller, in some ways the least culpable, will likely leave behind the most tragic legacy of all. His failure was the fatal miscalculation that people still give a shit about the truth. He completely missed the moral devolution of his own political party and I hope, at the very least, he shows the insight to abandon them.