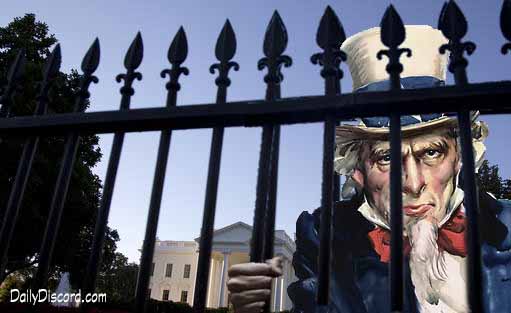 Anxiety is on the rise in this country and all this extra cortisol in the air is starting to stress me out. After reading a recent New York Times article I realized someone who knows about politics and anxiety should cover this topic ….with jokes! This NYT piece, which used Google-search trends as evidence, suggests our country’s recent stress-spike is not due to either Trump, Hillary or ISIS. As it turns out, poverty may be the biggest determinate of anxiety. This is no surprise when one considers Maslow’s Hierarchy of Needs. We all know what happens during a zombie apocalypse, and in parts of the Middle East such an event would go unnoticed. The Walking Daesh? My colleague Pokey thinks this Mess-o-patamia is due entirely to ideology. He is neglecting our own involvement, oil revenues, The UN, despots, rampant poverty, dogs and cats living together, mass hysteria. So why are 99.99% of American Muslims behaving, Poke? Did I mention Maslow? It’s much harder to radicalize someone with a full belly and a roof over their head. In fact, American Muslims are behaving even amidst this heightened redneck retaliations (RNR). Hey New York Times, I found a correlation of my own between ‘free tequila’ and instances of drunken mosque vandalism. In related Google-search trend news, Midget Porn has finally surpassed Hot Asian Sluts! Why not take a fiver NYT guy, and let the spoof newser take it from here?
Terrorism certainly adds more background noise, but not as much as one might think. This could be a good thing for Hillary as much of Trump’s appeal involves his supposed ability to keep us safe. As for emotional disturbances, we find terrorism generally has little impact beyond those initially traumatized. Studies suggest the impact on emotional well being dissipates for most rather quickly after such an attack, here, but proximity to the event does lengthen the effect, here. For example, 9/11 changed the trajectory of my life, thus this blog, but I don’t leave for the coffee shop each morning expecting to be attacked. Barista Marty excluded, because he’s just jaded. Deal with it, Marty! The customer is always right!
Obviously 9/11 packed the biggest anxiety punch terror-wise, but what really lingered post 9/11 was the economic effects of the Great Recession. The National Bureau of Economic Research shows the ongoing impact of this event to children’s mental health remains high. Is the residual 9/11 anxiety higher for our special Republican friends? You betcha. In the Middle East anxiety is obviously much higher still and therefore more ideal for radical recruitment. In America, the GOP is more anxious about terror than liberals and therefore more prone to heavy-handed counter-productive approaches. See: history. Not to mention their inexplicable willingness to vote for a dolt-strongman to keep them safe. Weak Constitutions? 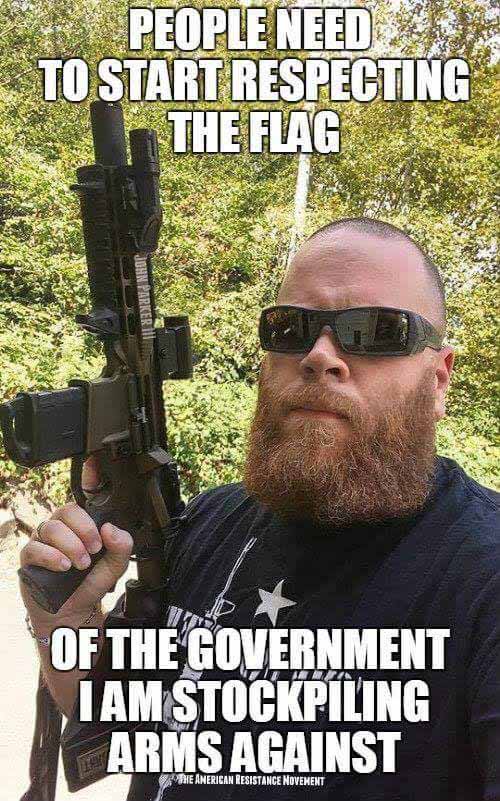 Can you spell cognitive dissonance? Probably not.

Of course, the collapse of 2009 was greatly impacted by our post-9/11 response and Bush’s Global War on Error. Lest we forget, the wars had a greater impact on our own long-term fiscal crisis than even the housing bubble, here. So your ‘strong’  response turned out to be the wrong response. Oh shock… and awe. We saw Russia’s heavy-handed approach in Syria prove similarly ineffective. Our current president understands this stuff, even if you don’t.
Meanwhile researchers in London compared MRI brain-imaging of liberals and conservatives and found liberals have a more developed anterior cingulate cortex (associated with complexity). Let me put on my larger anterior-cingulate shocked face. This is why your foreign policy has become simplistic and sad. It’s why Osama Bin Laden’s son went on record stating, “I can’t believe the U.S. took the bait.” If Trump is your party’s nominee I fear more areas of the Republican brain may be in Jeopardy, aka, stick with Wheel Of Fortune. “Tell them what they’ve lost, Vanna!”

Today our television sets and our online habits are a further magnifying our fears:

“When you’re online, you’re priming the amygdala to the point where it’s in a constant state of heightened anxiety, especially because when you surf the web, you’re going between written media, videos, and tweets. The digital life we all lead, in other words, is basically an invitation for a semi-permanent sense of panic and anxiety.”

We saw this recently play out with blog all-star Andrew Sullivan:

“An endless bombardment of news and gossip and images has rendered us manic information addicts. It broke me. It might break you, too.”

Similarly, 9/11 had a greater impact on people who absorbed more news and television at the time. Television is wholly bypassing our critical thinking abilities. With ten times more online sessions since 9/11, will the next major attack send us into a Buzz Feud? Sorry.
Over the years Fox News has effectively frightened the elderly which does indeed have an impact on brain function. I have referred to this as Roger Ailesheimer’s, but in lieu of his recent scandal how about a Limbaughotomy? Fine. I’ll work on that. [Winslow: Uh, no Rush, Zano]
Fox News Alert! Your brain is being hijacked by Fox News Alerts!
These tactics have had a profound impact on our psyches and our political leanings. Generally the executive command functions of the brain can override the amygdala and tamp down the fear response, but this doesn’t seem to be working as effectively for our Republican friends. I believe that the Matt Drudge, Rupert Murdoch and Rush Limbaugh types have figured this out. It might be all they have figured out.

“The only thing to fear is Fox itself.”

More and more studies suggest we are all living in a heightened state of anxiety (the same researchers take, here). Our post 9/11 blunders are a testament to this. We shut off our collective brains and invaded the wrong country, all while permanently damaging our constitutional rights. Each of us has an amygdala and we’re all susceptible to emotional responses. When I see the results of a terror attack play out on my television my initial thoughts are let’s get those bastards! But most soon return to the more nuanced strategy of ‘getting those bastards’ in a way that doesn’t create more said bastards. Republicans only equate bombs with action and they fear ISIS above all. Meanwhile, the chance of dying at the hands of ISIS in the U.S. is akin to getting hit by lightening while being eaten by a shark. But, when a successful attack does occur, it is projected into our brains over and over again. A recent example of this reprogramming came during a Jesse Watters segment on Fox. He asked people on the street what’s more dangerous, Climate Change or ISIS? He then made fun of anyone who didn’t pick the chosen bolstered boogeyman. Ironically he was then immediately struck by lightening and devoured by sharks. Such tactics over the years have proven to be an effective form of coaxial PTSD.
Liberals, who have somehow become the realists in the 21st century, would rather focus on tracking nukes and limiting uranium-enrichment of our more irresponsible countries. After all, this is the most likely way we might die en mass via terrorism, yet Republicans hardly seem interested. We have no images of radiation poisoning, so the only real threat doesn’t even register. Instead, these folks will perseverate on the lone-wolf scenario, you know, the shit we’ll never beat. Misan Lycanthropes?
Fun Fact: with the explosion of gun ownership in the U.S. no citizen has managed to take out a mass shooter in process. The closest they ever came? Someone during Jared Loughner’s onslaught in Tucson almost shot another armed citizen. Winning!
As a result, conservatives are prepared to hand over their paychecks to the likes of Donald Trump who will perseverate on the impossible and ignore the correctable. The point of high irony is this: you survivalist types need only retreat to your bunkers after someone you vote for is elected. Trump would also stop the Iran deal on day one. Republicans would choose to let them move toward a bomb, which, in a few years, would force another escalation/conflict/occupation. It’s moronic.

“Leadership means inspiring us to manage through our fears. Demagoguery means exploiting our fears for political gain. There is a crucial difference. If leaders exploit public fears to herd people in directions they might not otherwise choose, then fear itself can quickly become a self-perpetuating and freewheeling force that drains national will and weakens national character, diverting attention from real threats.”

As for my own rhetoric over the years, I guess you can call me, Al. Our Republican friends are simply a diversion. Again, who is behind this and for what purpose? The oil companies, the Koch Brothers, the Jonas brothers? I danno, but they continue to make a mockery of something I like to call “reality”. Gore does a great job in this essay and he also shares this old but relevant quote:

“Man, once surrendering his reason, has no remaining guard against absurdities the most monstrous, and like a ship without rudder, is the sport of every wind.”
—James Smith (1822)

Currently the Republican party is at the mercy of some trade winds more akin to a beer fart. Pabst Blue Rip-one?
[The next 27 Zano beer fart jokes removed by the editor]
Doesn’t this explain the Drumpf phenomenon? There is some real anxiety out there as there are increased reports of a scary ass-clown who may become Commander in Chief. According to neuroscience, our frontal lobes don’t work as well under stress. One political party is reeeealllly insistent that you don’t think clearly anymore. Minus the extra cortisol rushing through your system, you may actually do the right thing and they can’t have that. We’ve seen how early childhood trauma can impact brain development in a similar manner to methamphetamine. That’s not a joke, although I wish it were. As a result of this political brain-damage, liberals will be able to predict the future and Republicans will likely end it. No one is going to give a shit what a Republican thinks fifty years from now …and me? I’m way ahead of the game, because I don’t give a shit today. PreKochious? Wait, we can’t end on a bad joke like that…
How many Republicans does it take to change a lightbulb?
None. They don’t believe in change.
It’s an original. I’m not proud of it, but it’s an original.