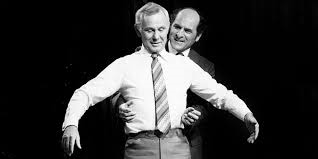 Shady Acres Retirement Home—Dr. Henry Heimlich was in the news earlier this week after saving a fellow retirement home tenant from choking. More details of the incident are emerging that throw the famous anti-choke artist into a decidedly different light. According to witnesses, before Mr. Heimlich was able to eject the goods, a Lemony Snicket-like series of unfortunate events ensued.

“I knew what to do,” argues Dr. Heimlich, “But, look, I haven’t taken a life saving training since the Reagan Administration. I practiced one time on Johnny Carson back in the day. Sure his opening monologue wasn’t great that night, but he wasn’t exactly choking either.”

Dr. Heimlich is denying allegations he was hoping for such an event by paying kitchen staff on the side to serve unboned fish and extra-grisly meat.

Dr. Heimlich responded, “I don’t even think grizzly meat was ever a menu option at Shady Acres. So here’s what happened, Patty starts choking at dinner so I immediately ask, ‘Does anyone know the ME maneuver?’ When no one answered I asked if anyone knew CCR. Ethel said, “I saw them at Woodstock, but I’m not sure how that helps.” Then I made Ben go boil some water, but that’s when Ethel said, ‘You only do that when a woman is about to give birth.’ I knew this was highly unlikely as Patty is pushing 90, so that’s when Bonnie suggested she might just be confused again and not really choking at all. That’s when I told Jeb to go get a second opinion from Dr. Alzheimer’s. Last anyone heard, Dr. Alzheimer lived on the seventh floor, but there’s only five floors in Shady Acres, which is why most of us are convinced Dr. Alzheimer suffers from Dementia. We had him paged as well, but no one has seen Dr. Dementia since the great unicorn/bingo incident of 2010.”

What Mr. Heimlich is being critized for most is the actual application of his famous technique, which many called “a sad attempt” and “fucking pathetic.”

Mr. Heimlich defended his technique, “I knew I had to clasp my hands and arms together, but I positioned myself too low the first time. Had this been a fella, he probably would have blown a testicle. The second attempt I got the position right, but I thrusted downwards instead of up and got my dentures stuck in Patty’s bonnet. The third time worked, because Patty collapsed against the dinner table at the right angle and ejected that cheese ball faster than a bouncer at Bada Bing’s. Before the next incident I’m taking a refresher course; they’re named after me, you know … Dr. Alzheimer’s.”