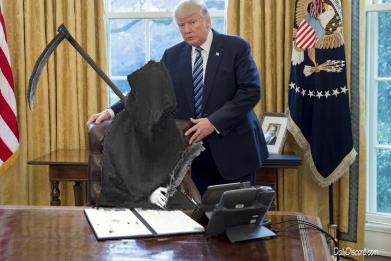 Tweet Tower—A new deal between the Trump Organization, Big Pharma, Signa, and the Grim Reaper actually hastens the life-process for individuals associated with high medical costs. This new plan is designed to benefit the healthcare providers, while at the same time helping ordinary people, like you, pass into the underworld more easily. The collaborative effort is designed to cut costs, cut life support, and finish off Obamacare by the midterm elections. The details of the deal remain shrouded—in a black cowl, actually—but the president promises it’s a big win for healthy young people, who should probably stay inside from now on …where it’s safe.

Some argue the recent agreement between the “axis of evil” is partisan in nature. The president is downplaying the fact that on this plan Democrats can now expect to leave this dimensional plane of existence an average of ten years sooner.

President Trump responded to critics today, “People already have shorter life expectancies in those square states, so this is just leveling the playing field a bit. It’s fair. It’s fair. It’s going to cut through a lot of end of life red tape for a lot of blue voters. This is going to be great for me, my family, other rich people, Big Pharma, and even little Pharma.”