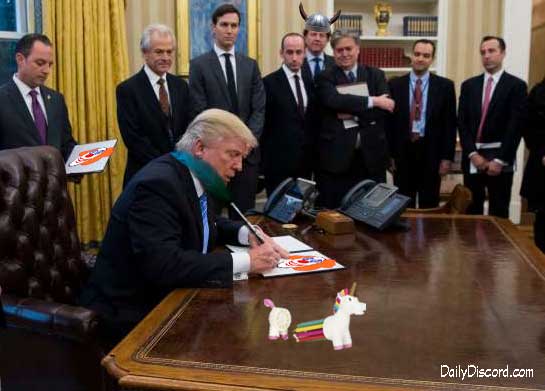 Tweet Tower—President Donald J Trump has signed a bill officially separating the GOP from any and all connection to this reality. Many on the right are calling this move Earthxit. Republicans argue this will not change how they govern as they maintain they’ve been successfully ignoring reality since early 2002. Kellyanne Conway explains, “An alternate reality is the same place where alternate facts reside, so now everything will match perfectly. I think that’s why the rest of the world rose up against President Trump last Saturday, because they just don’t understand the important alternate reality we’ve created through incessant bullshit. Even data can be manipulated to express this new reality, mostly just by turning any graphs upside down. And for no additional cost to the tax payer, I might add.”

Many in the media are calling this decision “dumb” and “stupid.” President Trump responded to these criticisms with a series of presidential tweets:

No more criticizing me. No more! Very un-American. #Losers!” and:

You may not be entitled to your own facts, but I am! #ExecutiveOrder #ComingSoon

Kellyanne Conway also told The Discord today, “This new and improved reality will go a long way to explaining how we are all ‘winning’. Otherwise things could stay confusing. We will now only be accountable to this new reality, which means we’ll very likely not have to be accountable at all. This is also why Betsy DeVos is the perfect pick for Secretary of Education. She already uses Phonynetics—fictional words that are easier to use in a sentants. See, that’s one already! (Sent*ants: lots of words together in a row that mean stuff.)