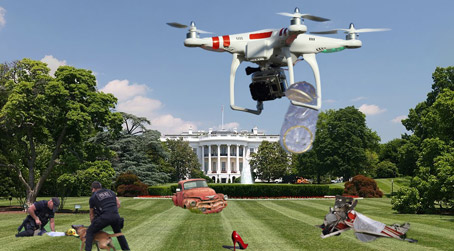 Washington, DC—The head grounds keeper of the White House and “dreamer”, Enrique Rodriguez, is about to walk off the job as landscaping 1600 Pennsylvania Avenue is becoming increasingly hazardous. Enrique is absolutely sick of breaking weed whackers on parts of drones and having his mowers constantly clogged with Secret Service condoms.

Enrique explained, “Over by the Visitor’s Pavilion my weed whacker kicked up a condom that knocked an unmanned drone right out of the air. That’s not the bad part. Then the drone spun out of control and took out an azalea planted by Lady Bird Johnson.” When asked about the worst offenders, Enrique said, “The fence jumpers are definitely the worst. Those bastards are killing more pansies than ISIS and Putin combined!”

Enrique also recounted a recent riding mower incident that almost cost the life of an unconscious Secret Service man. “They are supposed to be keeping our President safe and I find this one passed out, face down in the Hoover Hedges. It’s ridiculous. They usually pass out under the South Lawn Fountain, which is fine because a weed whacker to the side burns will usually rouse them. But that gringo almost lost his feet!”

Such incidents are on the rise and most of the grounds crew are saying they won’t work under these conditions. “We know the Secret Service are smuggling in women every night,” continued Enrique, “Who am I to judge? But those women always seem to lose a stiletto somewhere, especially after the sprinklers. Do you know how hard those high heels are on my Lawn Boys?”

The Obama Administration has gotten the message and the President is determined to clean up Dodge, or at least let the grass grow high enough so it’s less noticeable.