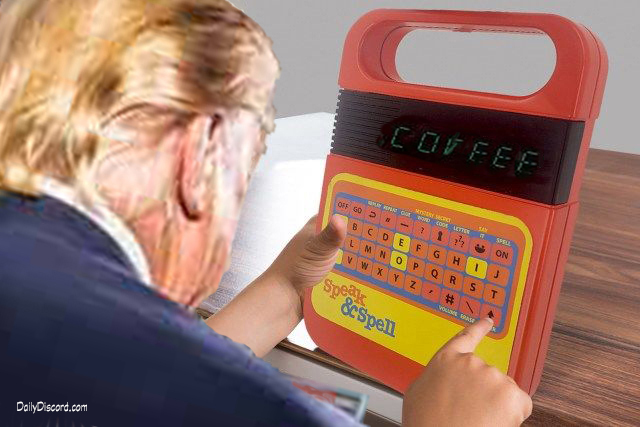 Tweet Tower—The White House is viewing North Korean President Kim Jong Un’s recent present as a “positive diplomatic development”, despite the controversial nature of the gift itself. The Supreme Leader of NK sent the White House a Speak & Spell, which the president seems to “really be enjoying in lieu of any and all intelligence briefings and his usual presidential duties.” The president told reporters today, “The other day I sent my good friend Kim Jong Un some of my favorite American hamberders and he sent me back this cool thing that helps me tweet better and stuff #BFFs!!”

CIA head Mike Pompeo said, “This is another indicator that North Korea is abandoning its nuclear ambitions and is one step  closer to joining the international community. It’s a clear gesture of good will. We have had the best minds in Silicon Valley and beyond test this device and the Speak & Spell is not nuclear powered in any way, which is proof positive of North Korea’s more peaceful intentions. Those hamberders must have really made an impression.”