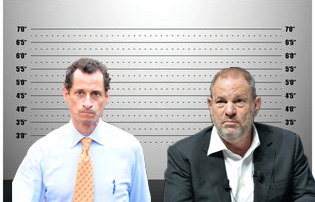 Holywoody—Harvey Weinstein’s name is being dragged through the mud, and rightly so, but a Hollywood sleaze-ball just doesn’t carry the same weight as Pro-Life Congressman Canned After Urging Mistress To Go ‘Choice’ Herself. Now that’s comedy! As for the Breitfarts of the world, it’s just another false equivalency story. Senator Scheister’s antics always gets brushed aside, so the rightwing can stay focused on every misbehaving liberal in the world. Shouldn’t we be more focused on the height of hypocrisy, aka Republicans? It’s always some sitting congressman, trashing LGBTQ rights by day and hangin’ out at the truck stop restroom by night. Conservatives are the reaction-formation party. “I hate those gay guys, gays are horrible, I see that smut everyday, I’m watching it now …God, that guy’s hot.” It’s always the crusader, who secretly desires what he’s railing against. News Flash: Dear Republicans, you are not the “live and let live” people, you are the “family value warriors” who will eventually be busted downtown at the brothel, in diapers. Look no further than your toddler-in-chief, whose antics will trickle-down soon enough, but not the way you think. But more on that bladder *cough*, later.

If Trump is your savior, sorry, you’re praying to the wrong golden calf. Why would anyone in their right mind want a Republican in power? I have been asking myself this question since 2003, and the answer is in the question. They are not in their right minds. The less competent their leaders become the more fervent their support. It’s not so much an inverse relationship as a perverse one. Some are calling for civil war if Trump is removed. They don’t even want to hear Mueller’s report …on an obvious asshole. Clinton should hang for Benghazi, even though, as Trey Dowdy recently admitted, “Nothing could have saved those men.” Yet there’s no crime too egregious for President Ass-Clown Hitler.

The liberals have some responsibility for the decaying state of our culture, but, make no mistake, the political malaise and the coming collapse lands squarely in the right wing’s lap …dance.