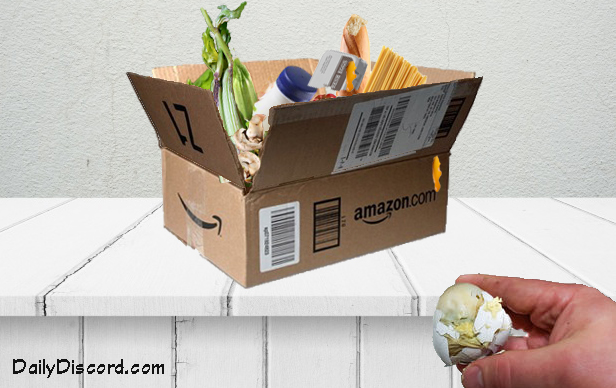 Seattle, WA—Amazon announced plans to acquire the Whole Foods grocery chain for a cost of nearly 14-billion dollars. Amazon CEO Jeff Bezos is already on the defensive about the move and is attempting to quell mounting fears. “Amazon is not going to dispense of shoplifters in Robocop fashion and we are certainly not going to replace workers with hipster dronebots,” said Bezos. “I admit our initial wave of food deliveries have not worked with our existing system, because it was designed for non-perishables. And, although our drone fleet will likely increase breakage slightly, it is projected to significantly reduce instances of E. coli and botulism. I realize there is also concerns our employees will lose benefits, but I can assure you our workers will enjoy constant software upgrades and periodic lubrication breaks. I would also like to dispel the rumor that we will be shifting to a virtual shopping system by the fall. Oh, and we are not changing the name the chain to CyberFoodsConsolidated.com …just yet.”

Amazon’s move to grocery stores has shocked many, but the company has already dabbled in such endeavors. A project piloted in Seattle is already hailed as a great success. The store features a surveillance-heavy model with building sensors that could detect anything leaving the store. A spokesperson claims patrons will either be billed as they walk out the door, or, in the instance of shoplifting or credit card denial, executed in the parking lot by security droids.

CyberFoodsConsolidated.com has already announced there will be absolutely no layoffs in the foreseeable future, except in incidents wherein existing employees are unwilling to participate in the company’s bionic refitting operation (BRO). “I would also like to add we are not going to call our newly refitted employees Brobots …just yet,” said Bezos.