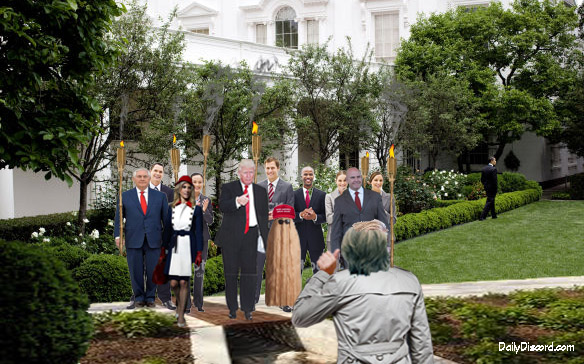 Tweet Tower—A small gathering assembled outside the White House today to say farewell to Steve Bannon, the president’s chief-misogynist. Mr. Bannon used the executive sewer system, created by former Vice President Dick Cheney, to return to his subterranean headquarters at Breitbart.com. Upon his departure, Bannon told the Discord, “I realize the White House has 35 bathrooms, but where I’m from you can piss wherever you want. And you can’t put a dollar sign on that, unless you spray paint one on the wall. Or you can always throw up a swastika or two, or just throw up. Heck, whatever you want to do down here in the sewer is alt-right with me, hah! Whatever happens in the sewer stays in the sewer. No one will ever know, well, besides the rest of Trump’s cabinet, who should be joining me shortly.”

In an interview with CNN’s Lester Holt, President Trump explained his decision to fire Bannon. “I really couldn’t stand his title. I was thinking to myself, Chief White House Strategist? I’m the only chief. The country only needs one chief. If there’s a tribe of Injuns who own a casino somewhere then there’s only one person giving the okay to cash in your chips, right? Why do I need Bannon? I don’t need that asshole teaching me how to hate. Have you seen me without a teleprompter lately?”

A lot of people are already angry about the appearance of Cousin Itt in this photo. Hey, we all have a Cousin Itt, so it’s time we came to terms with that.