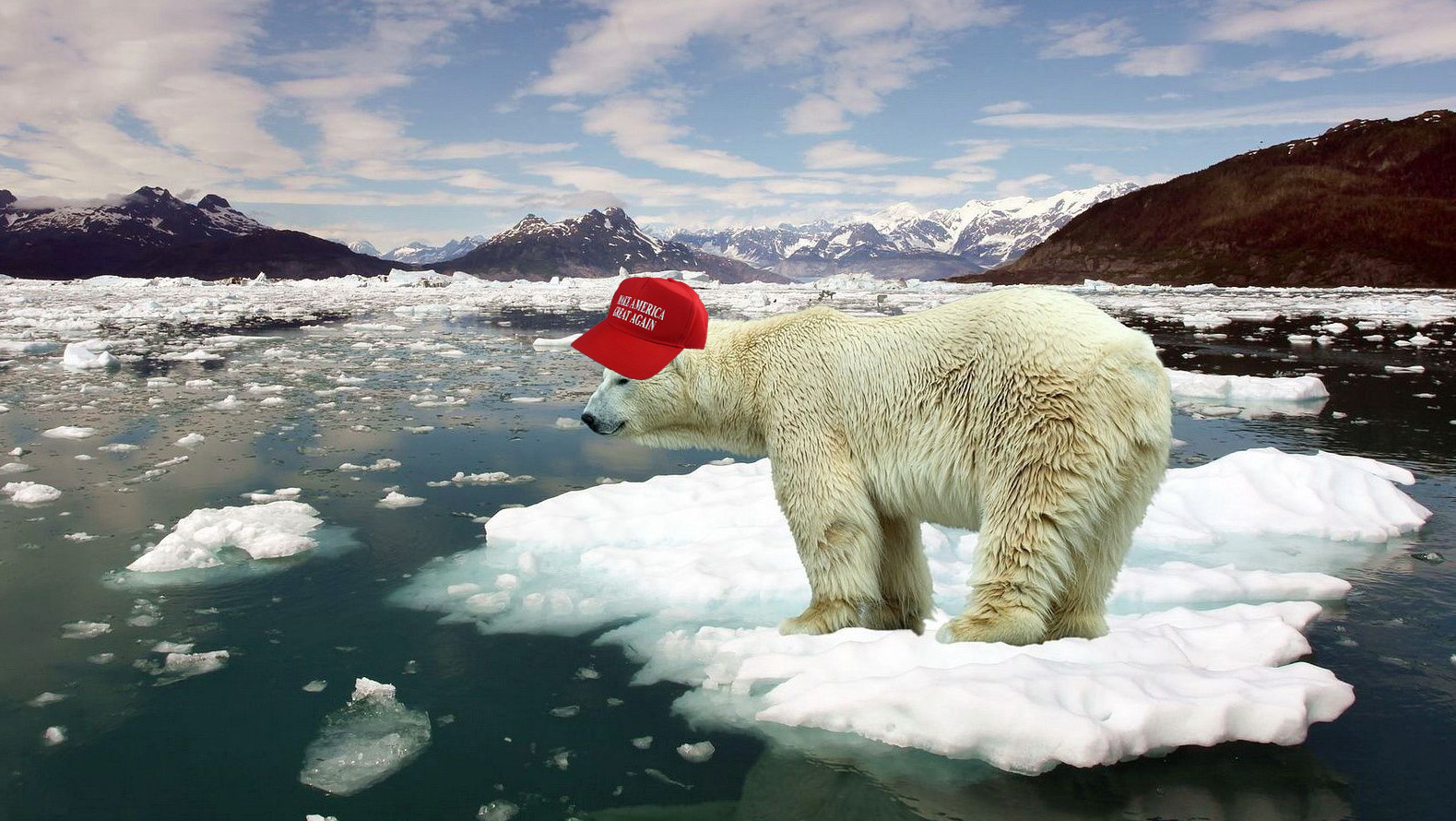 Despite the ongoing collapse of conservative ‘thought’, each news cycle still brings a barrage of new and intriguing rightwing dimsights. At least Puerto Rico has a storm to blame for knocking it back 30 years, what’s the Republican party’s excuse? Today, as the Antarctic Pine Glacier retreats another 100 miles, the GOP’s brain capacity retreats another 100K neurons. Meanwhile, our President is mulling trade rules that could lead to tariffs on California solar, at the same time his crony, Rick ‘can’t-remember-all-three-things’ Perry, is bailing out coal and nuclear. The juxtaposition is astounding. This would be dumb twenty years ago, but today we have to invent a new word (luckily I have, later in the article).

Sure there’s money to be saved if the water coming out our taps is brown and the bridge on our daily commute is poised to collapse into the toxic waste below—you know, Winning! Of course, you still won’t see any of that money unless you’re the one percent, but in some ways maybe you are. Some neurologists maintain we humans don’t use our full brain capacity, but if you’re still a registered Republican in 2017, you are that fighting one percent …of active frontal-lobe usage. NeuroticTransmitters? NeuroTransHaters? Dopameans? Sorry, I can do this all day. No-epinephrine? See? Amazing what you can do when you use more than one percent of your brain capacity …and then choose to do this shit *cough*.

Today Team Trump is bailing out four nuclear power plants south of the Mason-Dixon line, two in SC and two in GA, and someday soon we will find out just how vulnerable these are to the new flood-plain maps and brewing category 11 hurricanes …because our hurricanes go to 11! Remember Solyndra, that solar power plant that went bankrupt in Obama’s day? Back then a bailout of a sensible energy source was called ‘socialism’, so I guess by that logic Trump’s bailouts of nuclear sites is ‘anti-socialism’. Obama suffered what many hailed as a scandal for trying to bailout a fledging new green power source, but these assholes can bailout Fukushima Jr. without anyone even talking about it #DiversionaryTweets? Hint of the Day: Don’t kneel during our national anthem, bend over.

I know we have to speak on a third grade level to get our points across, so here’s a simple explanation for our friends on the right: 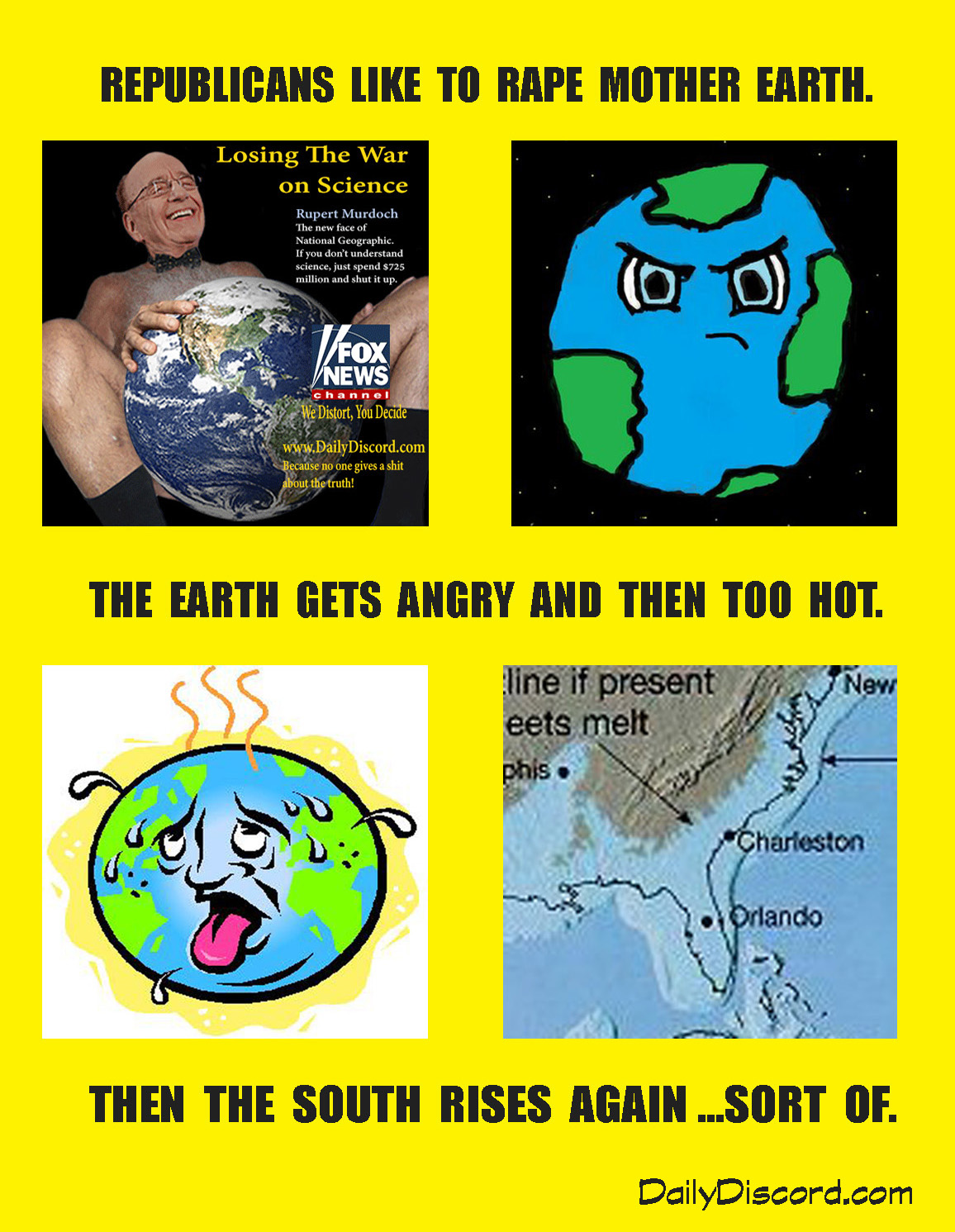 Now the other interesting near-future-horror that awaits is this: due to global warming the Middle East itself is quickly becoming uninhabitable. Two thirds of the water is already gone and it’s only a matter of a few short decades before the whole region is unsuitable for human life. What’s funny about this is how, thus far, the instability of recent wars, fueled by the Bush Doctrine and the Arab Spring, has actually increased populism. So the increased chaos of the Middle East has essentially helped  conservative parties in the many countries now forced to deal with the resulting Exodus (Chapter Screwed). Good thing Republicans benefit from their mistakes, because that’s all they’ve got.

Most are now of the mindset that we have passed the point of no return on climate. Even the decimated and rotting parts of our tropical forests are now surpassing what the healthy parts can absorb. So even our greatest carbon-balancing hope is now tipped against us. Full story here.

If you haven’t checked out this Parody Project bit, you should:

“No limits on pollution now.
There’s not a thing we don’t allow.
Dump the garbage in the waterway.
Spray the toxins where your children play.
All the signs say that life on the planet is headed for a downward fall.
Go to the mall,
and continue to confound the science.”

—Parody Project (to the tune of Sounds of Silence)

There are some basic things we should be able to agree on amidst this Age of Information, especially as we float policies that may or may not lead to our species’ destruction. Republicans, however, are simply not permitted to understand this stuff. Someone has gone through great lengths to keep them in the dark.

Rightwing ignorance is wholly self-sustaining now. They like the dark and the dark is where they will stay. Like it or not a great culling is in the forecast for mankind, but, don’t worry, ‘great’ is right in the name. So we’re going to make extinctions great again! Bigly culling. Yeah, maybe at this point it’s for the best. I’m not a huge fan of cockroaches becoming the dominant species on the planet, but Rasmussen does show they’re more popular than most Republican policies.

Oh, I promised a new word for this level of reckless stupidity. Hmmm, Truthular Degeneration? Megaladumb? Progressive Regressiveness? Just pick one. Yep, more than one percent of my brain capacity *cough*.