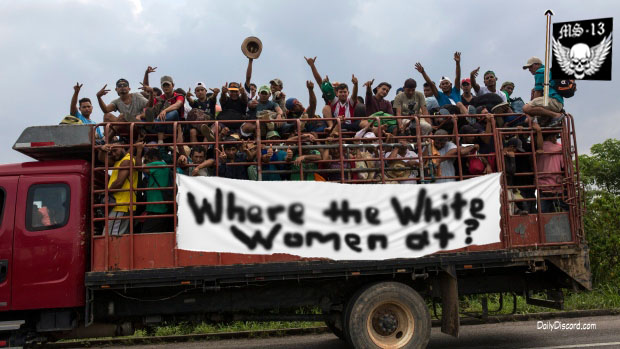 South of the Border—My friend and blogvesary has unknowingly been encouraged to weaponize the topic of immigration reform right before the midterms. He really thinks he’s coming up with this latest brainfart all by his lonesome, which is adorable. Yeah, let’s ignore the whole tyrant-minus-any-checks-&-balances thing so we may bring you the latest rightwing distraction, in caravan form. This issue is near and dear to their hateful hearts, isn’t it? After all, it spurred the recent populist wave, it plays directly into their fears, and it’s probably the main reason behind the coronation of their hapless strongman. It also has the distinction of being the only issue of our time that conservatives are only ‘mostly wrong’ about, not the usual ‘dead wrong’ about. Here’s the problem with your thesis, my friend, overall numbers of illegal entrances is way down in recent years and more Mexicans are actually leaving the country than coming over. The only exception is Guatemalan emigration, which is on the rise for one main reason: extreme drought exacerbated by climate change—a situation that will only worsen under Republican rule. But that does not mean we can avoid a comprehensive immigration plan, nor does it negate the fact multitudes of brown, liberal-leaning MS-13 recruits are winding their way closer to our southern border every day. Yawn.

Stop giving a megaphone to a megafool. You’re smarter than this, Pokey! In a recent comment thread my friend suggested: “I come back to reality” on immigration reform. He effortlessly shifted the conversation from being ‘wrong on fascism’ to being ‘wrong on immigration reform’. I made the mistake of commenting on how the U.S. plays an ongoing role in the destabilization of South America, which has contributed to this problem and he responded:

“Now back to the real world, where Leftists have been interpreting the 14th Amendment so as to reward people who break the laws to enter the country by granting full citizenship to their children.”

Whereas the real world is getting warmer, the relevance of your ilk is getting much cooler. Funny how the constitution is untouchable unless your peeps want to do something stupid with it. Meanwhile, there’s a direct line from Trump’s irresponsible energy policies to these caravans heading our way. Whether you can acknowledge or process the following fact or not, it’s nevertheless true:

“Because of the impact of drought, Guatemala is in the top ten of 194 countries for vulnerability to the climate emergency. Immigration from Guatemala to the US has spiked since 2014 because of severe drought.” —Juan Cole

Republicans like to ignore the whole we-are-contributing-to-this-problem and shift to the whole let’s-implement-our-crappy-expensive-counterproductive-solution to said problem. Regardless of the issue, conservatives, not Mexicians, are the largest barrier to our collective future, period. Hey, let’s do a trade!

Our DOJ, Jeff Sessions, is working feverishly to make it harder to seek asylum in the U.S. in the first place, which I don’t entirely disagree with, but I’ll reserve judgment until I see the final ruling. Okay, I’m going to go out on another limb: he will make a shitty situation worse, which is the GOP’s M.O. But here’s why immigration reform has thus far stalled: Dems are afraid of losing some of the minority vote for supporting immigration laws deemed racist and Republicans continually lie about the scope of the problem. I would bet 90% of all Fox News viewers believe illegal border crossings are statistically way up in recent years. In fact, after hearing Trump and his base’s rhetoric on the lead up to the midterms, a large portion of our country thinks immigration reform is the biggest problem our country faces. On the run up to the 2004 election, when illegal crossings were much higher than today, George W. Bush extended temporary worker status for illegal immigrants to pander for the Latino vote. So, yes, this is bullshit like everything else everything espoused by the right in my adult lifetime. Think about it, people with preexisting conditions—folks who may die before their time—are voting this November on this inflated issue, an issue that essentially can be summarized as:

Yes, there’s been a huge downturn in overall border crossings since the turn of the century and those that are coming are escaping the very real consequences of climate change.

Robert Reich recently pointed out how Trump’s wall will actually hinder the mass egress of undocumented people back to Mexico, but you have to admit your team has bullshit down to a science …well, if you believe in that sort of thing. The biggest issue of our time is the fact we elected an authoritarian dolt to office. Yesterday, I read that our pending environmental collapse is 16th on the American voter’s mind, which is inexcusable. We no longer deserve to lead the free world and maybe that’s the one good thing that will come from all of this: we won’t anymore.

Come on, Zano, you said Republicans had some points on this issue. Focus!

Sure they do. Comprehensive immigration reform is sorely needed and border security should be increased. I’ve been saying that all along, but this needn’t be done via a wall or through the military. But as a sovereign nation we do need an effective border security strategy. This fact remains at the heart of the Republican’s partial credit, but as for the encroaching caravan:

So, yes, you’re repeating a hyped up issue so that you will continue to vote against your interests. Yep, somewhere a Pavlovian super villain is ringing a bell for you. Abhorrent Conditioning? Almost anything on Fox News is designed to fear-bate and distract from our real issues. You are being used, again. When are you going to wake up and smell the covfefe?

There’s only one question worth asking today: will this country recover from your ilk’s rampant shortsightedness? Ancient alien theorists say, NO! When is being wrong all the time going to get old? If you think immigration reform trumps Trump’s ongoing unchecked super majority, you should endeavor to reach a reading level commensurate with your president. Start with Dr. Seuss’s: A Bigly Big Rocket In My Pocket!, Horton Fears Who?, Oh, The Places You’ll Grift, and my favorite: One Fish Two Fish Three Fish …Blue Wave.

[Winslow: Don’t forget Trump’s own Whose Boat is this Boat?]